Mike Tremont and myself fished Lake Berryessa on Friday and did the BBT tournament on Saturday. What a great turn out on a beautiful weekend. Friday was greeted with beautiful and stable weather. Water temps have been on the rise and the big girls were moving to the shallows. While the bite wasn’t wide open for quality fish they could be found. Friday was calm and forced us to fish plastics. Senkos, Ned Rigs, jigs, and rip baits worked at times. We started in the main body and searched for quality fish moving up. Around noon I got a nice spawned out 7.02 largemouth on a Senko in 4 ft of water. We then probed the east banks with flipping presentations and Senkos in the flooded brush. We caught plenty of fish on Senkos fished wacky and Texas. We then moved into the narrows and got on some slow tapering points and caught em drop shooting, jigs, and rip baits.
Saturday was tournament day. We were about boat 109 out of 129 boats to blast off. We decided to run away from the masses due to the fact we knew the prime water on the east banks would be covered. Therefore we ran towards the dam and Markley cove. Nothing doing in Markley which was kinda baffling since it had been easy to get 15 lbs in there prior to tournament day. The weather change may have not agreed with the spots and small mouth on this over cast yet calm day. Water temps were still about 62. Mike suggested we move to the backs of coves and bays since the fish were not on points. BAM! I get bit on a Berkley Havoc Pit Boss flipped into the brush in 2 ft of water. A beautiful 7.60 largemouth that turned out to be the big bass of the tournament. We then probed bays and coves for flooded brush and threw the Pit boss and a senko for the rest of the day. We culled several times before running up lake to look for the 7lb bed fish from the day before. Water clarity did not permit sight fishing, just had to hope they were there. Well if she was she wasn’t falling for out presentations today. We moved over to the east bank and I flipped the pit boss in watermelon red while mike threw a S waver and a Senko. Bam a good bight, I set the hook and a 6 lb largemouth comes flying out of the water, waves with her tail and bam the hook comes out. 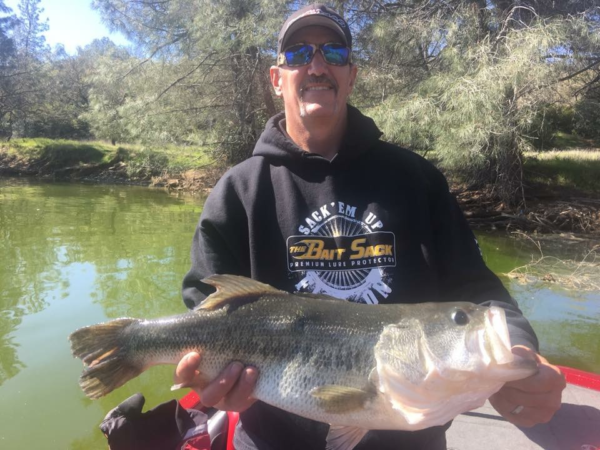 The bite was tougher but the fish are moving up. Id look for the bite to improve in the coming weeks as the fish get ready for the major spawn. Its that time of year to get out on the water for the fish of a life time.
Id like to thank Monsterfishingtackle.Com for the continued support. Everything we fished with can be bought there and shipped direct to you for no charge on $50 or more purchases. Abu Garcia Revo Sx reels spooled with Berkley 100% Trilene in 17 lb did most of the flipping damage, and 15 lb for the senkos.
Until next time tight lines.
Sean Wayman
Regards