STOCKTON, Calif. — As he stood on the front deck of his boat, surveying the pre-blast-off scene at Day Three of the TroKar Duel in the Delta at Weber Point Park, Louisiana pro Greg Hackney admitted to being a little unsettled. 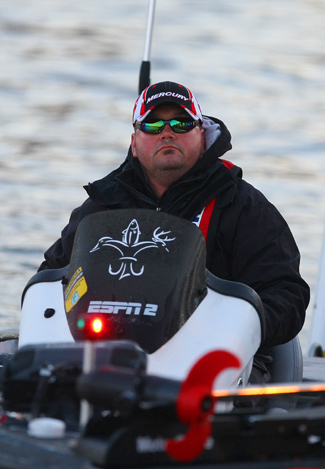 James OverstreetGreg Hackney is a model of focus as he idles his boat towards launch.

“I need to switch something up,” Hackney said, matter-of-factly pointing out that he was almost 14 pounds behind Stephen Browning, who had stubbornly hung onto the lead through the first two days of the first Elite Series event of 2010. “I’m getting fish, they’re just not the fish I need. I don’t know what else to do, so I’m going to switch up a little bit.”

So, switch up he did … for awhile. Hackney tied on an array of different baits for the first three hours of a wind-blown morning on the California Delta, and didn’t catch much of anything. Around 10:30 a.m., the lipless crankbaits and swim jigs went back in the rod locker and out came the flippin’ stick.

The result: 25 pounds, 7 ounces of largemouth, by far Hackney’s biggest bag of the tournament, and an 8-10 kicker that catapulted him to a three-day total of 57-5 and the lead heading into the final day of the tournament on Sunday.

“I tried some other stuff and I couldn’t get a bite for three hours,” Hackney said. “Around 10:30 I told my marshal ‘Man, this isn’t working’ and went back to flippin’. The way it’s working out for me is that I have a very short window of opportunity, and as soon as I went back to flippin’, I caught that big fish. I’m definitely fishing a pattern. I had fewer bites today, just bigger fish.”

Through the first two days of competition, Hackney ran a series of spots that produced best for him on a relatively constricted time frame (the bottom of the outgoing tide, just before low slack, and right after the tide started to come in again), flippin’ a dark brown creature bait. Although he hadn’t found the quality of fish he thought he needed to compete for the lead, he had settled into a comfortable pattern on a fishery that he admitted he felt right at home in.

“This place just suits me,” Hackney said. “I feel like I’ve learned a little more about it each day I’ve fished it. All my fish in practice were on a high tide and we haven’t had a high tide to fish all week, so I guess I’ve been practicing all week. The tide still gets me sometimes, though. I go through periods where I’m totally lost. I feel like there are some times when I have it figured out, though.”

Topsy-turvy on Day Three
Hackney’s dramatic mid-morning shift was typical of a topsy-turvy Day Three that saw a seemingly unshakable leader falter, and one of the most experienced tidal fishermen on the tour get turned upside-down on his tides.

Browning, who through the first two days of the tournament doggedly fished the same water in the north Delta with great success, saw his bite fizzle out. The Arkansas pro had been slugging it out in the same slough for two straight days, scratching out six to eight bites a day, but his bite evaporated today, leaving him a single small fish (a 13-ouncer) to show for it.

“I don’t know if they just fed so good (Thursday) that they just didn’t want to feed today,” Browning said. “Weather like we had today really affects a guy who’s fishing in a spot where he’s getting six or eight bites a day. All of a sudden, it goes down to two bites a day. If you’re in an area where you get 15 to 20 bites a day, your odds are way better.”

Mike Iaconelli, who enters the final day in second place with 54-10, seemed headed for disaster three-fourths of the way through the day.

Fishing the same isolated 2-mile stretch of water that he’s had completely to himself all week, Iaconelli failed to get a bite for six hours on the same low water where he’d been so successful on the first two days of competition.

Once the tide caught up and pushed the water level up, though, Iaconelli made up for lost time in a flurry, putting 14-14 in the live well to keep him in second place.

“I’m lucky to be where I’m at,” Iaconelli said. “It was almost embarrassing. I could NOT get a bite on the low water, and I’ve done well all week on low water. Today, everything happened on high water at the end of the day.”