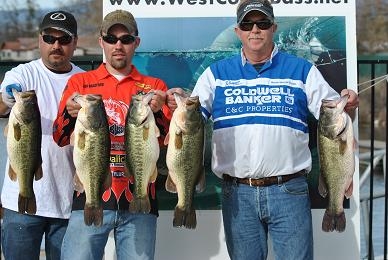 Jon Bradford and Russ Myers shown at a Clearlake Pro Am

Fishing proved to be tough for almost all anglers fishing the Flw Everstart tournament, the bite was there but it was very hard to find and stay consistent at the same time! Many anglers found fish sitting in different water columns, some were throwing senkos and drop shots up shallower which seemed to provide better quality fish while some were sticking a jig in front of some fish in 50 or 60 feet of water maybe even deeper in some cases! Many found that the trick to getting fish to bite was slowing your presentation way down and often just dead sticking your bait, colors seemed to vary with many anglers. Some anglers including myself believe color didn’t play a huge roll when it came to getting bit or putting numbers of fish in the boat, as much as getting your bait down there and letting it sit in front of fish.

I myself finishing in 70th with 7lbs 12oz did not have a great tournament, neither did practice partner and fellow RB pro staffer Kevin Cornwell finishing in 98th place with 5lbs 6oz. This was both of our first times fishing in a non-shared weight pro-am event, we both walked away from this tournament learning allot! We headed up to the lake Tuesday morning and pre-fished Tuesday and Wednesday, Tuesday we started off throwing different baits just trying to get bit, Kevin landed 3 or 4 decent fish early on a hula grub rigged on a half oz football head, we proceeded to catch 2 more fish this way with several bites and only caught one more fish dragging a 4” worm on a split shot. Day two, Wednesday of practice we didn’t do so well only boating one fish all day with only 2 or 3 other bites!

Day one of the tournament was cold, wet and miserable for the both of us. I only had 4 bites all day, one being a trout, one was a short fish and the other 2 went to the scales, all caught a green pumpkin hula grub rigged on a 1/2oz football head. I only weighed 2 fish for 3 lbs 3oz and Kevin also weighed 2 fish in for 2lbs and 6oz. That night after talking to each other and sharing info about our day, I decided I was going to throw nothing but a hula grub rigged on both 1/2oz and 3/4oz football head jig on day two until I had a limit since this seemed to be our most constant bait to get bit on!

Day two proved to be allot better fishing for myself bringing 5 fish to the scales for 4lb 9oz, not the best bag but I was catching fish! I caught all my fish on the 3/4oz football jig, fishing in 40-50 feet of water dragging the jig on the bottom and often pausing it for long periods of time, I managed to catch 9 fish but 4 were short. Kevin had about the same kind of day as he did on day one bringing 2 fish to the scales for 3lbs. for a total of 5lb 6 oz. I know we both learned allot from fishing this tournament and hopefully the next time around we can take some of this knowledge and use it to better our finishes!