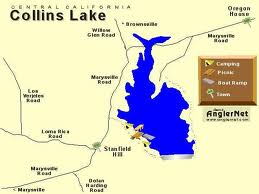 After my last trip to Collins Lake I wanted to get back out there and see if the giants were active in the spawn, what I found was very interesting.

My friends Colin Peirce and the person best known as “Colin’s dad” Denis and myself all decided to head down to Collins lake for some late afternoon bass fishing. We arrived at the lake at 3:45 pm decided to run up the river arm after a friend gave us a good report of a recent trip he took. I started with a spinnerbait, Colin a worm and Denis a fly rod in hand rigged with a popper. We started fishing brush and bushes on the east side of the river, just about 50 yards north of the power lines. Fished along here for 30 min or so with no success, we changed lures a few times but never got any bites. Picked up and moved to the first incoming creek on the east side before the bridge, I noticed some shad activity so I broke out my Wake JR hoping to entice a big fish to commit to eating an injured trout. No bites on it but there were two quality fish that followed it out giving away their position. We threw a couple baits back where they came from but they were to savvy for us. We started working back towards the mouth of river changing lures, depth and cover as we went. Finally about mid way back a couple large fish followed the Wake JR back to the boat, Denis picked up a Senko (white,4 in) pitched it behind the bush they swam out from and first fish on.

Unfortunately the fish got into the brush and couldn’t get it out, during the fight we noticed that it had a very large belly and was about a 3 pound fish. The large belly was the most intriguing thing we noticed, being the water was 73 degrees the thought was that the bass would have spawned out by now. 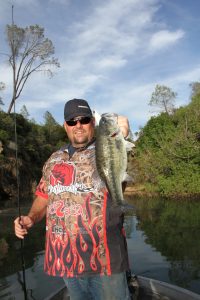 4.5-5 Pound fish on the Whopper Plopper

Colin decided to tie on a Rebel Pop’R bait, was tossing it around the bushes and boom good size explosion but the fish missed it. Here is where this report gets its name, I decided to pull out the River2Sea Whopper Plopper.  First cast got two blow ups but no hook ups, started working our way back to the incoming river with again several blow ups but no connections. Then as we approached the river I noticed the water transition point made a long cast into the colder water (62 degree) brought the Whopper Plopper back through the transition and big fish on. Now we had the baits A Whopper Plopper and a Rebel Pop’r were not being put down the rest of the evening.

As we worked our way back out of the river we noticed the bass that we were catching and the ones we would see cruising all had the same thing in common, fat bellies. Our deduction is that even with the warm water temps the spawn hasn’t happened yet. We fished until dark which was about 8:30 pm ending our evening on the west side of goose island, flat-out wrecking the schooling Spotted bass from 1-3 pounds all on Whopper Ploppers and Rebel Pop’R. For only being a 4 hour trip it sure was packed full of good fishing. If you are looking to head out to Collins Lake be sure to pack your topwater baits, I’m sure you will agree nothing beats a good topwater bite. 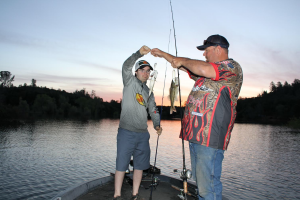