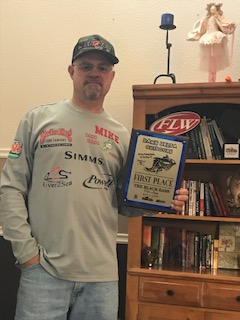 Leading into this event I had one half day to practice on the river due to my 401(k) business obligations and the WWBT Teams event at Clear Lake. I practiced Wednesday prior to the event in the afternoon and found a couple of different patterns. In practice the Delta breeze finally laid down and I found a strong top water frog bite and punch bite. I was testing a Strike King Space Monkey out for the very first time and they were smashing it under the matted vegetation. I also caught some nice frog fish that were absolutely choking the bait. In addition, I found some cruising fish and a few in the 4-5lbs range on beds. I had 27 lbs for best 5 in a short period of time.

On game day I got paired with Joey Wynman for the 2nd time this year. Joey is a great guy and we had a blast fishing the last event together. Because this event is a shared weight, I decided to tell Joey exactly what I was doing the night before and what to bring. In a shared weight your Am is your team partner for the day and some guys just don’t get that. I like to have my AM start with his own fave baits and it they are not working I give him mine. Sometimes this puts me on a different color or bait.

Of course, as is oftentimes the case at the California Delta, the weather cooled down 5-7 degrees during our event which meant a roaring Delta breeze right at launch. The wind would take my bed fish and frog fish out of play and my punch bite needed some sunlight and heat up under the mats. I decided to gamble and fish an area I haven’t been to all year. I pointed the big Phoenix 921 out West where the wind is always stronger and started to hit some marinas and other protected areas that typically hold fish this time of the year. We started with KVD Sexy Dog walking bait and a wakebait. This put a quick 10lb limit in the boat along with some nice striper action too!

The topwater action died when the sun came up so we switched to vibrating jigs. We used the Dan’s Delta Fat Sack in Delta Bug tipped with a Strike King Rage Menace. I died the tails of the Rage Menace chartreuse to replicate the pesky bluegill which Mr. bigmouth finds quite irritating around beds. This pattern enabled us to cull up to around 13-14lbs.

At 10 o’clock we abandoned this pattern/area and made a big run back East towards Stockton. We were quickly rewarded on the first punch mat with a 7.7lb punch fish that fell victim to the Space Monkey in Falcon Lake Craw. We also caught a 4lbr on the same mat and had 2 good culls. We ran this pattern for the rest of the day, keying in on pennywort and primrose mats with 1.5 oz Strike King Tour grade tungsten and the 4/0 Hack Attack Heavy cover Hook. Eventually we culled up to the point where we were balance beaming 3lbrs. Towards the end of the day Joey stuck a key fish, which was 4.8lbs and that put us up to 22.8lbs which was good enough for first place. I would like to thank all my sponsors for their continued support as I travel along this amazing fishing journey.