Angels Camp California lake new Melones. As I pre-finished for the Bass nation opener at new Melones  I realized that pre-spawn pattern was going to be the ticket, I found three places that had large numbers of largemouth. Two long pockets up river, a spot in the North and also a big school mid-lake towards the south. On day one of the tournament I ran to Brushy Cove and started my day on the main lake point. I quickly picked up a limit on a River2Sea S Waver in the color called party crasher on the new Phenix rods maxim series. M0y plan was to run up river mid day as the water started to warm up. Sun direction is key in these pre-spawn conditions you want to find the coves and pockets protected from the north wind and facing west, so with around 12 pounds Clip N Culled in the box I ran up river throwing a Swim Jig with the Bass Assassin Lures die dapper in albino shad color as my trailer. I only culled one fish and quickly realized that the river  bite was gone and it was all about being south. I ran back to Brushy cove where I started to catch a lot more fish but only helping my limit to just under 15 pounds. In my opinion with the overcast conditions and cool breeze I just felt that the bigger females did not move up but I had a solid bag for the day to put me in six place, still just a few pounds out of the lead. Pondering what I should do for day two I figured I would start at brushy Cove and see with the overcast conditions going away if those bigger females would move up. I started on the long point just as I did the day before. This did not pan out so I moved through into the pocket. I started to get a few bites right away. That’s when I realized the fish had pushed farther back into the pocket. My new plan was to just rotate three small areas no bigger than 30 yards and just wait for the fish to come to me. As I rotated through my spots I quickly picked up a limit and then BOOM a good one just as the day before I started off with the S waiver but quickly moved to the Bass Assassin Lures’s fat job stick bait, I was rotating three Baits almost exclusively and would add the swim jig here or there, the third bait was a Bass Assassin Lures Rail worm. The fat job stick bait was the most successful. I would just fancast going around with a small nail weight 1/4  oz rigged wacky style and leaving it dead stick. This was the key and as I rotated my three areas fish just kept coming to me and although a lot of boats were rotating through that area everyone would move in and make a few casts not get bit and leave. The key was knowing that those fish were coming at you targeting several laydowns and Buckbrush and just waiting. All of my fish for two days were coming off of a 30 yard stretch.  After day one I weighed in a pretty solid bag of three pounders but all the people ahead of me had that one big bite, which I never got on day one , but on day two about mid way through the day I finally got my big bite to go along with my solid limit weighing  in at just under 18 pounds witch was good enough for third place to start the Bass Nation season off in a good position. I would like to thank all my sponsors Cal Coast fishing, River2sea, Bass Assassin Lures, Bass Angler Magazine, Phenix rods RBBassfishing.net and Evolution Baits 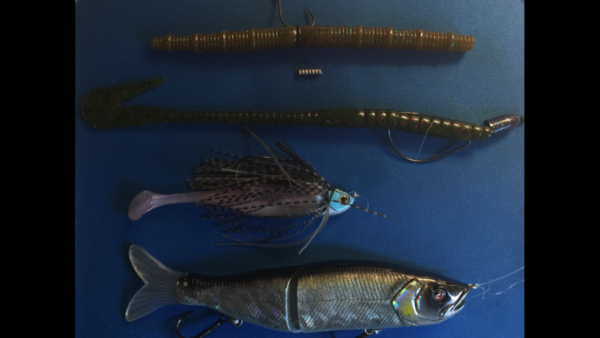