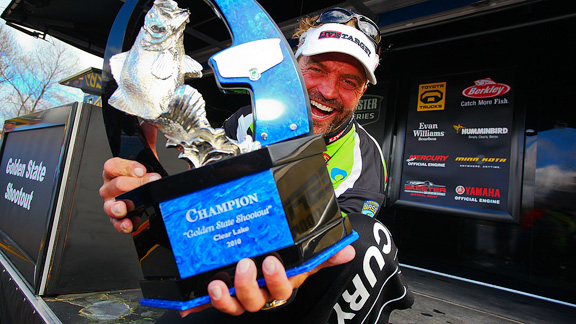 Velvick ruled on Clear Lake by matching the hitch with swimbait

“Look at the size of the swimbaits on that deck,” Alan barked into the microphone. “Jared Lintner, are you kidding me?”

No, he wasn’t kidding.

Neither were Byron Velvick, Skeet Reese, Shaw Grigsby, Ish Monroe and many of the other anglers rolling past Alan that morning.

As you might expect on a fishery where the most California of bass baits was first officially introduced to the rest of the country — courtesy of Velvick’s three-day record of 83 pounds, 5 ounces at a BASS Open in 2000 — the giant swimbait was out in force on Clear Lake last week.

And, with results like Velvick racked up over four days of pounding the western shoreline with a new 7-inch swimbait, you get the feeling they’ll be some swimbait lessons taken if there’s another Elite event here.

Velvick threw a new Rago Baits BV 3D 7-incher with the same eye-popping results that first created this treble-hooked monster: He boosted his Day One 29-0 bag with a 10-pound, 11-ounce swimbait fish (only to be one-upped two 24 hours later by another swimbait monster, Bobby Lane’s tournament-best 11-1), and added at least one 6-plus-pound kicker fish every day to push to his winning weight to 98-6.

Velvick’s closest pursuers — second- and third-place finishers Bill Lowen and Guy Eaker — put on a circus act with the number of 4- and 5-pound largemouth they caught on swim jigs, chatterbaits and lipless cranks in the shallow waters of Rodman Slough, but they simply couldn’t produce the kind of 6- to 10-pound kicker fish they needed to derail Velvick’s swimbait parade.

Or, in tournament lingo: “If you’re not throwing swimbaits on Clear Lake this time of year, you’re fishing for second place,” Velvick said.

Flirting with the beast

Heading into the 2010 Shootout, most of the field of 93 had made a conscious commitment to either learn or re-acquaint themselves with a technique that, frankly, many of them had never even tried before the Elites last visited Clear Lake in 2007.

That tournament provided the ultimate testimonial of the big-bait bite as Alabama’s Steve Kennedy sacked a BASS four-day record 122-14, Reese weighed in 117-6 (a record for about 3 minutes, until Kennedy weighed in behind him) and five other anglers broke the 100-pound mark, almost all on swimbaits.

Kennedy had come to Lakeport in ’07 with a basic knowledge and confidence in swimmer-style baits — he had weighed in 36 pounds on swimbaits the week before at Lake Amistad — but had never committed to the 6- to 9-inch Osprey and 8-plus-inch Huddleston Deluxe Trout that are so popular on Clear Lake.

It didn’t take him long to embrace them.

“It was unbelievable,” Kennedy said of his 2007 jumbo jag, which included a 40-7 bag on Day Two and a 15-minute stretch where he hooked an 8-pounder, a 9, a fish he estimates at 11 or 12 that broke off, and a 10-pounder that he had to release because it was hooked outside the mouth.

“I had 35 pounds in 30 minutes on one spot. Once I figured it out, it seemed like it was pretty easy,” he said. “The danger of that thing, though, was that after that tournament I wanted to throw a big swimbait everywhere I went.”

The other danger was to his pocket book: Kennedy estimates that he rang up nearly $5,000 in purchases at Tackle It and Clear Lake Outdoors that week, buying “some good baits, and a lot of junk,” which might have hurt more had he not won $110,000 in the event.

Many of Kennedy’s Elite competitors this year, however, were a little less enthusiastic about a week of casting an 8-inch, 4- to 5-ounce bait on 30-pound test and an extra-heavy rod.

“I threw my tennis shoe for about and hour and got real tired of that,” Kevin VanDam said matter-of-factly after Day Two of practice, echoing the thoughts of Denny Brauer, Greg Hackney and many of the eastern pros who tied the big baits on almost out of a sense of duty.

The mystique of the bait had become such a poltergeist on Clear Lake that it bullied its way into the minds of some of the most talented anglers in the world. Hackney admitted that he knew “enough about swimbaits to be dangerous to myself” before the Shootout, but come Day Two, the amiable Louisianan had a pool-cue-thick rod and an enormous rodent-imitation swimbait on his front deck.

Arkansan Stephen Browning, who had the momentum of a top-five finish in the Duel in the Delta the week prior, arrived in Lakeport with a box full of big baits and the belief that he needed to throw them in order to be competitive.

After scratching out 12-9 on the first day of the Shootout, Browning ditched the big boys and went back to more familiar techniques.

“They say ‘When in Rome, do as the Romans do,’ but from now on, when in California, I’m going to do as the Arkansans do,” Browning said before Day Two. “I threw those big baits all day, but I’m really not feelin’ them. I’m going back to flippin’ jigs and throwing stuff that I’d throw if I was fishing in Arkansas.”

Both Lowen and Eaker did the same, giving the swimbait a short whirl early in the week and then falling back on the techniques they knew they’d catch fish with.

“I did it for a little while on the first day of practice and decided ‘Nope, this ain’t for me,'” Eaker said.

Acquiring the swimbait attitude
As Velvick, Lintner and the rest of the West Coast swimbait crowd will attest, the technique requires a certain level of physical and mental endurance to succeed over the long haul.

The bigger baits are upwards of 5 ounces — requiring a heavy rod and 20- to 30-pound test — which translates into wear-and-tear after several hundred casts a day, as was Velvick’s case in Clear Lake.

“I’m not going to lie to you, my body is trashed,” Velvick said as he nursed a head-to-toe body ache. “I had more and more problems with my neck and back (as the week went on). I’d cast, and while the bait was flying and sinking to the bottom, I’d be adjusting my back and neck.

Velvick’s swimbait bites came almost exclusively during three brief time periods: from 7 to 9 a.m., again between 10:30 and 11, and once more late in the afternoon, roughly 90 minutes before check-in. In between, he’d endure two- to four-hour castathons for another bite or two to supplement his bag.

“How much fun do you think it is to go for hours without a bite in a tournament like this?” Velvick said. “It’s not fun at all. I’d get to around noon and start to get antsy. I’d get one to three fish in the morning and then I’d hit a real big lull where I’d have to sit there and grind through it. That’s all you can do, just grind through it.”

Working the bait
Because it’s designed to imitate a slowly moving baitfish, a swimbait requires either a glacially slow retrieve, or a deadstick retrieve where you leave the bait suspended in the water for several seconds at a time before slowly starting up the retrieve again.

Velvick introduced yet another wrinkle last week with the BV 3D, which was designed to be fished somewhat weedless, thanks to an innovative weighting system and full pectoral fins that protect the belly hook from being snagged on grassy cover.

The weedlessness of the bait allowed Velvick to crawl it slowly through the grass beds on the flat inside a small bay he fished all four days, keeping it close to the bottom.

“When the water’s cold like it was, you really want to slow-roll the bait, really milk it,” Velvick said. “I’d let it sink all the way to the bottom, which goes against the grain on most baits with a belly hook because they’ll snag. I was really looking to feel it make contact with something.

“The bigger fish were outside of the main grass, on individual little clumps of grass, so I’d do a ‘pulse-and-flutter’, and let the bait tick something. A lot of my bites came when I’d let it fall. It’d come into contact with something and they’d tomahawk it.”

‘I need to go see a psychiatrist’

Lintner appeared to be in a good swimbait groove after Day One when he weighed in 23-4 to settle in behind Velvick in second place. On Day Two, though, the longtime Clear Lake swimbait devotee motored into the dock shaking his head as though he’d blanked for the day.

He hadn’t — Linter weighed in 17-14 — but as he talked to Kent Brown of Ultimate Bass Radio, he expressed one of the frustrations of fishing the big baits.

“This bite is driving me crazy,” Lintner said. “They’re hitting the bait so hard it’s pushing slack in my line. They did that all day today. I try to set the hook and ‘Whoop’, they’re gone.

“And they’re not little tail-slappers, either. I had one where that thing hit and just hammered my rod down, and my marshal went “Whooooooaaaa!” But just like that, boom, it was off. I need to go see a psychiatrist. I’m going to have nightmares about swimbaits.”

As Lintner so colorfully points out, a swimbait bite is usually far from subtle. And, in many cases, the violence of the bite is more akin to a topwater bite then a crankbait bite because largemouth will sometimes slam a bait as it meanders by without really biting it.

Kennedy felt like the bite has changed since 2007, possibly because the lake’s largemouth have become accustomed to seeing these baits, and likely because the conditions last week were slightly different.

“Back then, it didn’t seem like it was as hard to keep them hooked, but maybe they’ve gotten used to the baits,” he said. “They’d come up to it, and if they bit, they’d just swim back with it and it wasn’t as hard to keep them on. And last time, they didn’t really care if they could see you or not. They’d hit a bait if it was right at your feet.”

Why the bait works
ESPN photographer James Overstreet took a photo perfectly illustrating why the swimbait is such an effective bait on Clear Lake. In it, a Western grebe holds a 9-inch hitch in its mouth, one of the primary sources of nourishment for the lake’s jumbo-class largemouth.

The Clear Lake hitch, a sub-species of the minnow family found only in Clear Lake, runs 9 to 14 inches at maturity, has a modestly elongated, slightly oval body, and begins its spawning run in late winter, continuing into early summer.

In other words, the lake’s largemouth were cued into the hitch all week and will be for several months. All the 7-, 9- and 12-inch swimbaits on the Elite pros’ decks were simply matching the hatch, including Velvick’s hitch-colored BZ 3D.

“I got to my spot on Day One and saw them chasing hitch, and I got pretty happy,” Velvick said. “I knew right then it was going to be on.” 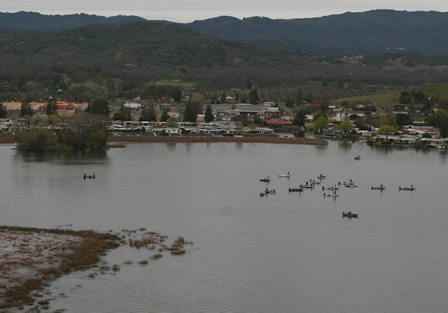