Professional tournament anglers are the envy of the world. They have the job of a lifetime, making their careers in the sport they love dearly. While most of us slave behind a desk or machine, the professional anglers spend their days in bass boats.
These anglers also hold most of us in awe. They seem to pluck bass out of nowhere. And, even on extremely difficult days, the tournament pros come to the weigh-in stand with livewells full of bass.
It is skill or luck? Perhaps it’s both! However, most tournament anglers quickly downplay the idea of luck. To them, luck is merely the time when tournament preparation, angling skill and opportunity collide. Both preparation and skill are controllable factors. And the angler with these factors under total control will have the opportunity to win a tournament. Thus, the professional tournament anglers make their own luck.
So how do the professionals control those intangible factors of preparation, skill and opportunity? Each professional angler has his or her own methods to tip the scales in their favor, but all of them share a similar ten-step process that increases the likelihood of tournament Success.

The same story fits the tournament-fishing scene. If the little train engine didn’t believe it could pull the boxcars up the hill, it probably wouldn’t. Likewise, the tournament angler that questions his ability to win the tournament is doomed to failure.
Confidence is not something that just happens. It requires years of dedication to the sport. For example, the more fishing trips you take, the greater your confidence becomes as you gain insight into different situations. But confidence often goes beyond fishing.
Your outlook on life plays an important role in confidence building. Professional anglers strive to keep upbeat perspectives about their situations. Some pros even visit sports psychologists to help them build confidence. Weekend anglers should also work at their mental attitudes as a way to nurture confidence.

The key to any job is having good equipment. A carpenter can’t build a house with a broken saw. A bank teller can’t cash your tournament check with a crashed computer terminal. And a tournament angler can’t win a bass tournament with faulty equipment.
Boats, motors, rods and reels must work properly in order to bring bass to the weigh-in. Many of the nation’s top professionals, like Peter Thliveros, spend hours rigging rods, spooling new line and preparing boats before competing. He says he spends nearly a full day before each tournament just preparing his gear for the event. Motor break-downs, broken lines or bound reels can jolt your ability to catch bass and dash your confidence. The best way to avoid these problems is with a good maintenance program. When your gear works properly, you get to spend more time thinking about fishing than thinking about gear repairs. 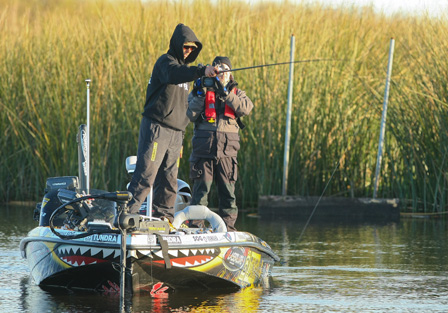 No two lakes are exactly the same. Some are deep, some are shallow, some are clear and some are dirty. Pre-tournament research helps the professional angler know what must be done to win a tournament. And nearly every top ranked professional angler spends several days researching the tournament waters before they even visit the area.
They will browse through the Internet for past tournament results to determine seasonal patterns and average bass sizes. They will spend countless hours on the telephone with local guides and fellow tournament anglers. They might even go to the library to look up the past history of the area. Most flooded reservoirs have secret roadbeds, building foundations and other man-made structures hidden beneath the surface. The old town maps tucked away in the library are often the only way to find these bass magnets. Tournament anglers must also research out the “peripheral” items, such as hotels, marinas, restaurants, launch ramps and gas stations. If you are worrying about finding a hotel room for the evening, you can’t concentrate on fishing. Doing some pre-visitation research allows you to book a hotel without enduring a frantic last minute race for an empty room.

Practice makes perfect. In the professional world, there are two forms of practice – technique and pre-tournament fishing. Technique fishing is simply a time when an angler goes out to practice fishing techniques. It can also be a time to try new baits or tune up old lures. But the object behind this sort of practice is to learn something new about bass or to improve upon a weak skill. After all, few people can pick up a flipping rod and pitch a jig under a boat dock. It takes practice and more practice, the type of practice the professional tournament anglers spend countless hours doing.
Pre-tournament practice is a much different matter. Pro anglers often visit the tournament lakes weeks before each event. They spend time learning to navigate the waterway, finding potential bass structure and trying to experience the bass catching patterns. All these things require time on the tournament water.
Each angler approaches pre-tournament practices differently. While many anglers spend several weeks prior to a tournament dissecting the lake or river, Thliveros says he likes to limit his pre-tournament practice time to three or four days. “I usually take one day and I do a lot of just fishing,” Thliveros says. “I’ll take an area that represents the entire lake and I’ll put my trolling motor in the water until I catch a few fish.”
This technique allows Thliveros to gain insight into the potential patterns within the lake. Once he finds a strong pattern, he says he looks for areas around the lake that have similar characteristics to those he discovered on the first practice day.
Since weekend anglers can’t always spend, time away from their work to pre-fish tournament waters, they should follow Thliveros’s method. Only practice on small chunks of the tournament lakes to discover the best bass patterns and cover.

“The number one goal of a tournament angler is efficiency,” Thliveros says. “So the more time you spend with your bait in the water, the better your chances of winning the tournament.” Before each tournament, most of the top professional anglers carefully prepare their gear. They re-tie knots, pre-rig Carolina rigs and tune crankbaits. Projects like this during the tournament eat up valuable fishing time. Weekend anglers should follow the same pattern of pre-tournament preparation to improve their on-the-water fishing efficiency.

One of the major differences between professional tournament anglers and weekend anglers is the ability to adjust to changing conditions. Most anglers don’t notice subtle changes like fluctuating water levels or suspending fish. Because most professional anglers spend 200 or more days per year on the water, they recognize these not-so-obvious changes.
Weekend anglers need to sharpen their observation skills to be more like the professionals. Watch the water around you. Surface breaking shad may mean the bass are feeding on the surface. Sudden temperature changes may send the fish diving deeper. Water levels, sun position, fishing pressure and current changes can all alter the bass’s habits. The angler who picks up on these changes the quickest often catches the winning tournament stringer.

Have you ever wondered why the angler leading the field at the start of the final competition day often does not win the tournament?

There is a very good reason. Professional anglers are willing to take chances. They will run their boats long distances away from the weigh-in if they think that distant area can produce just one quality fish to help them win the tournament. Sometimes the leader plays it conservative, while the other competitors gamble on the run. That gamble frequently pays big dividends. Gambling is especially important in the cut-style tournaments, such as the Wal-Mart FLW Tour. In order to win the tournament, the anglers need to make the final cut. Being conservative by catching lots of smaller fish to ensure a limit doesn’t do much for the winning creel. The top anglers go for broke, while most weekend anglers don’t take the risk.

Everyone gets frustrated. It can’t be helped. But professional anglers don’t let such things interfere with their jobs. When things go wrong, they simply shrug it off and go right back to work. They stay focused on their fishing.
Another key factor to maintaining focus and overcoming frustration is to have a good mental outlook on life. A positive attitude helps prevent negative situations from distracting you. Learn from the bad experience. The pros do. For example, if a fish jumps off, sharpen your hooks and cast back. If your boat breaks down, don’t give up, just keep fishing.
We can all learn a lesson from professional dog trainers. One of the first things a trainer teaches a puppy is to pay attention. There are several techniques to get the puppy to focus on the trainer and not on external distractions. The most common technique is to get the puppy to focus on good things, such as dog treats. And once the puppy learns to pay attention, training comes easier and quicker. Like the puppies, professional anglers must master the art of focus to make fishing easier and catching quicker.

No one can achieve any goal without the personal commitment to make it happen. Professional anglers spend a lot of money to compete. Thus, they must be committed to the sport. Without this commitment, they are needlessly wasting their money and time. Weekend anglers hoping to jump from Red Man Tournaments to EverStart Tournaments must also make this commitment.

The most productive workers are those that truly enjoy their jobs. Professional tournament anglers make fishing their career. They love the sport, the competition and being outdoors. Without this enjoyment, competing in a tournament would, be an arduous affair. Rising early, withstanding adverse weather conditions and standing all day on the bow of a bass boat takes its toll on the body and mind. But tournament anglers are quick to point out that the pain is worth the rewards.
“I still get butterflies in my stomach before a tournament,” confesses Peter Thliveros. “That means I still have it. If you lose that excitement, it’s time to quit.”