A day on the Delta with RBBASS angler Charlie King and fishing partner Mark Seaters.

Well todays adventure finds us fishing with Charlie King on the Dirty D, we are getting ready for a couple tournaments coming up so we better get our fish in a row and figure out what is going on out there !
I was woke up at 4:30 with a text from Charlie, I can’t sleep…. lets go !! The guys got more enthusiasm than a 16 year old on his first date !  Did I say us old guys rule !!
I dragged my old bones out of bed grab a cup of joe and head west to find Charlie pacing around wiping that beautiful Ranger boat down AGAIN.. I swear he is going to have the gel coat rubbed off in 6 months..LOL..The Man takes care of his gear that’s for sure !!
Everything was in order, he had all the Okuma rods and reels strapped on the deck ready for action all with a “secret bait” carefully tied on, we toss my gear in the boat and off we go to the promised land of monsters!
On to the fishing.. we get launched at Russo’s, what a nice clean and safe place that is centrally located to fish the Delta. I love that place.
The delta is a huge place and right now you can catch fish so many different ways..finding the big ones is the challenge! We are in the pre, spawn and post spawn time of year and weights have been a little on the low side for the delta.
We find the water temp around 68 and air temp was going to be upper 80’s clear sky, and we are going to have to deal with that damn delta wind…. Again !!! It’s going to blow about 20 mph..The wind from a last week or so does have the water muddied up pretty good too, more than I like. But we got to deal with it. That’s fishing, right ?
We point the Ranger east and find a little tulie patch with a bunch of sparse tulies here and there. We picked it apart pretty good with Charlie on the big rod punching holes in things and me tossing a Senko from the back with a LV 500 mixed in. We are going fish for fish, nothing big but fish none the less as we try to put the puzzle together. Seems Green or purple were the colors of choice in 4 or 5 foot of water on a high tide.
Then Charlie announces a man has to do what he has to do and pulls out the dr…dr…dr…dropshot.. there…. I said it !  A delta man with a drop shot just don’t seem right as the delta is big rod with heavy line country…It’s the land of monsters.  At least he had it rigged on a 7 ft Okuma bait casting rod and reel and not a spinning rod !! Anyway Charlie goes to schooling the old school guy and boats a few tournament grade fish, got my attention for sure. Nice job Charlie but I’m sticking with the heavy stick!! LOL 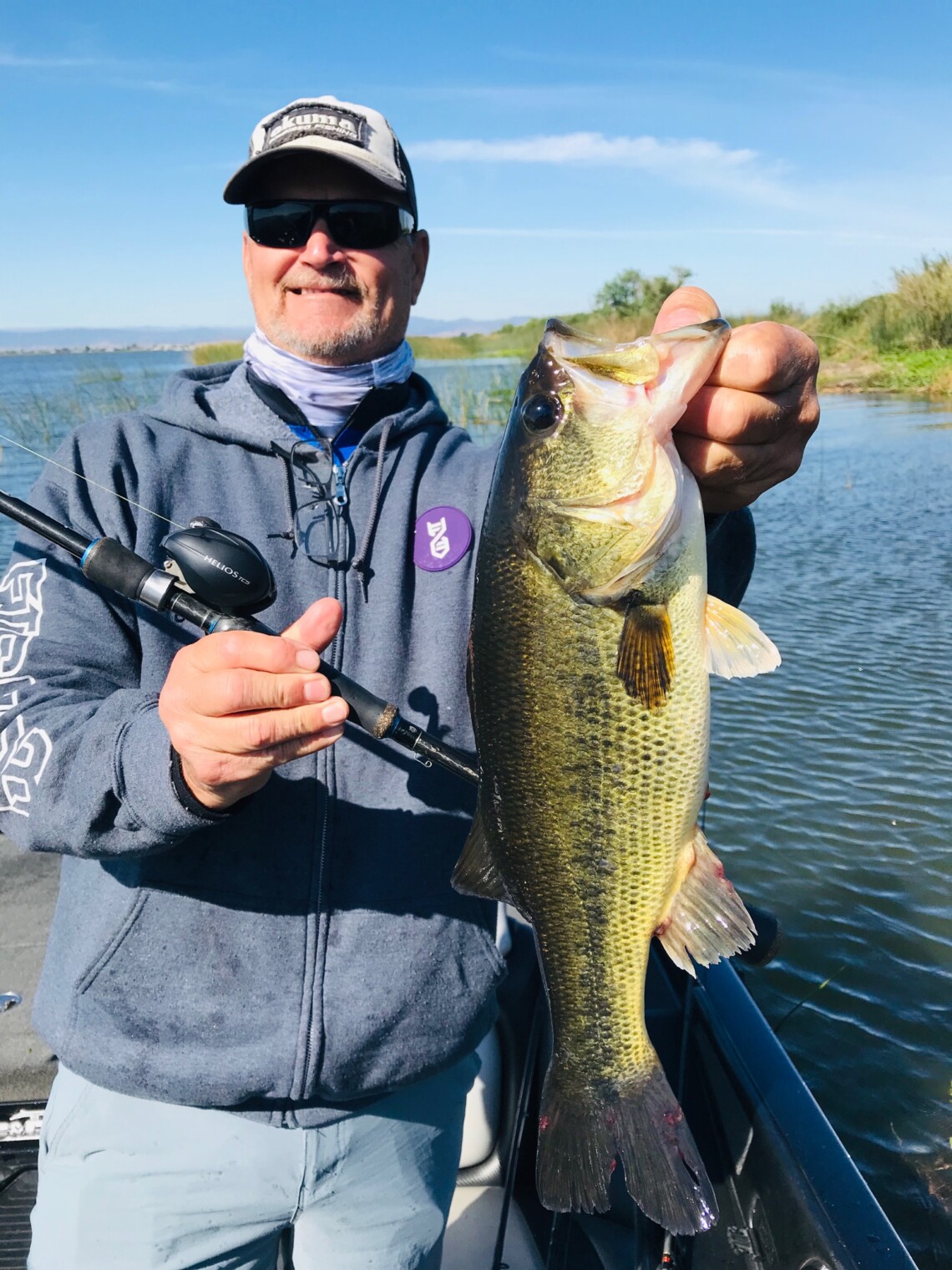 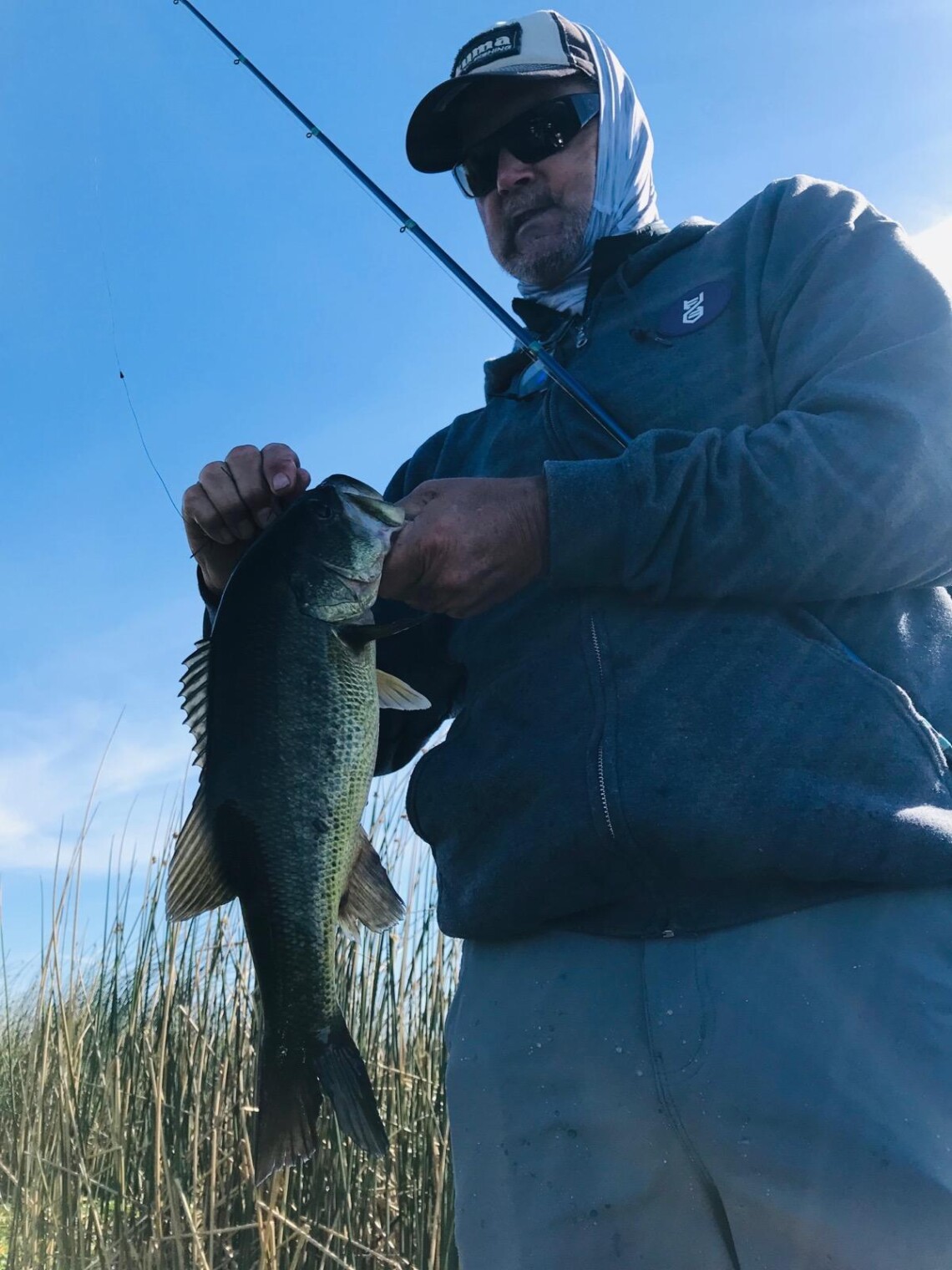 We bounced around looking at “stuff” punching matts and flippin the edge here and there with not much luck, not much on top either.
We pulled up on a little piece of bank with some wind on it and as we are in the middle of a conversation solving all the worlds problems someone dropped a 20 lb bowling ball on Charlies bait right next to the boat !!!! Yep it was a “delta donkey” and she wanted to play tug a war… Charlie and his Okuma won !! 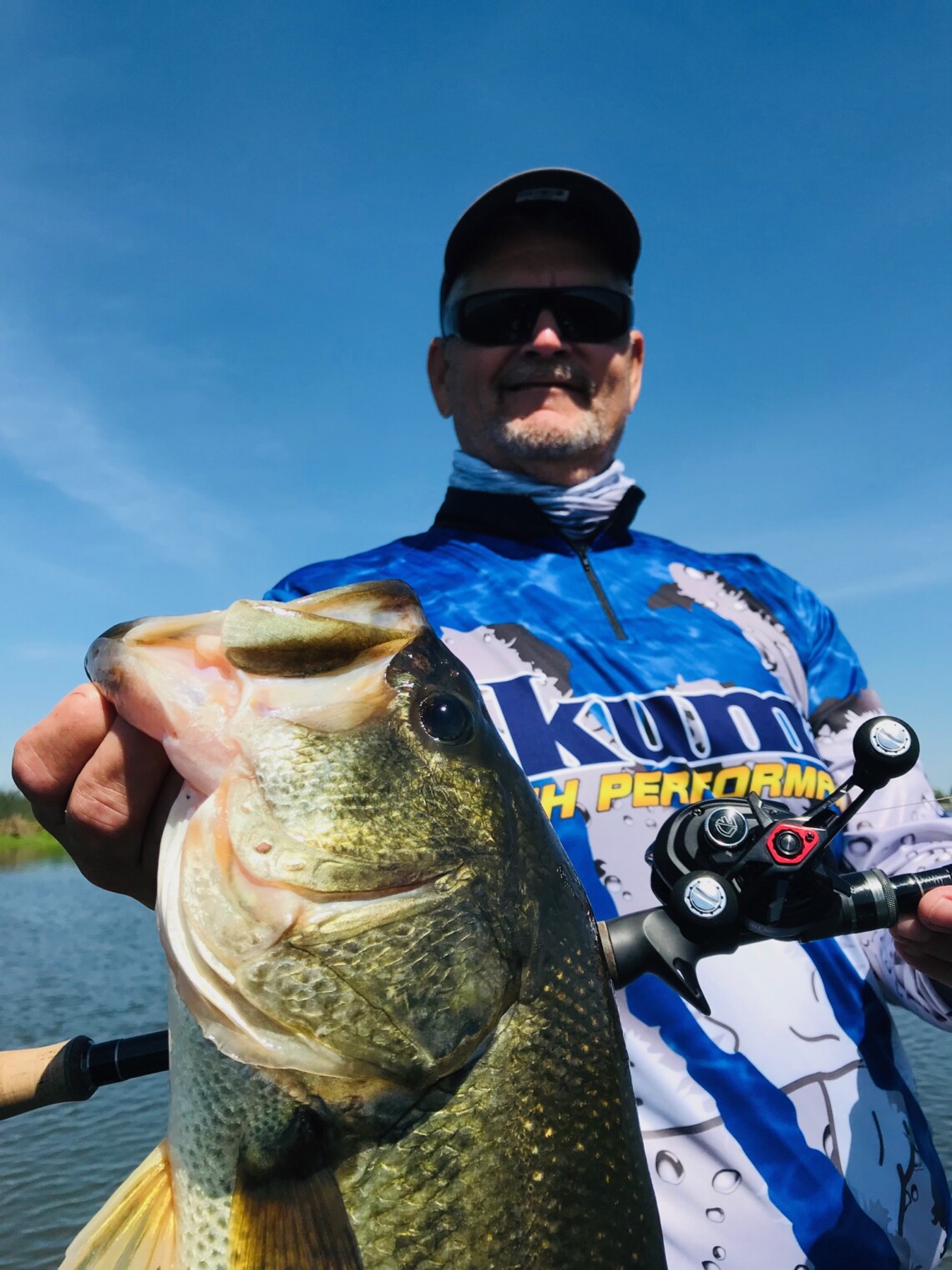 Nice to see the old gal and it looked as she was in the middle of spawn so we snapped a few photos and released her to finish with what mother nature sent her to do…
We moved around some more finding a area with several Donkeys that might come into play at a later date…we’ll have to keep a eye on them…wink wink !
Our day found us with around 15 lbs maybe a little more.  Green, purple, brown around sparse patches seems to be the pattern for us, but that’s nothing secret  on the delta.
Nice to be out there, Thanks Charlie and all the folks that make times like this possible….. nice times for sure !!!