Date: 02/12/18
Location: California Delta
Wind speed/direction: North 5-15 mph
Air temperature: 39-59
Water temperature: 51-53 degrees
Tide: 1 hour incoming, 6 hours outgoing
Moon phase:  waning crescent 10% visibility
This particular fishing report will be slightly different then my routine reports you’ve read in the past. This report is going to be directed towards fishing for Florida strain largemouth bass in a shallow water impoundment influenced by tidal movement or otherwise known as the California Delta.
The recent weather we’ve been experiencing has been abnormal to say the least. We had a fourteen day stretch where the daytime high reached the middle to high seventies. This caused the water temperature to creep up to fifty-eight degrees. The bass became extremely active and lots of small buck bass made a push towards the shallower water.
Anglers located the fish in the shallows and everyone got excited about bass getting ready to spawn in all the flooded ponds. The bass on the California Delta are no where near ready to spawn. The eggs in the big hen bass haven’t completely developed yet and the water temperature hasn’t stabilized. Lots of anglers including myself were capitalizing on the active bass, and a few big hens were being caught on the secondary edge of all the popular ponds. Things were looking up on the California Delta and the fish were transitioning from their winter pattern on into the pre-spawn phase.
Everything was going just as planned until a major cold snap smacked us across the face sending the Florida strain largemouth bass back into a lull. The North winds blew, and blew they did, with gusts up to forty miles per hour. The temperature plummeted into the fifty degree range and the overnight low was recorded into the low forties. Lots of frustrated anglers reported fishing trips with one or two fish being caught. Water temperature fell into the low fifties and those aggressive buck bass pulled off the bank and back into the secondary edges.
I launched my boat with little optimism due to the current weather conditions. I love the challenge of fishing in post frontal conditions and the work that goes into figuring out which pattern will be most productive. After launching I headed directly to the only place I know where bass congregate in post frontal conditions. I headed directly to areas which possess any sort of cover. Tulle lay downs, hyacinth mats,  hydrilla mats, and any other vegetation whether it be emergent or submerged is where I target when attempting to locate quality fish.
In the area I was fishing the tide would be incoming for the first hour, and then it would be outgoing for the rest of the day. I’ve found the incoming tide is more productive this time of year rather then the traditional outgoing which the majority of almost everyone prefers.
My bait of choice when flipping and pitching is a Berkeley havoc pit boss rigged Texas style, with a pegged tungsten sinker, 65 pound braid and a heavy duty flipping hook. I typically have three to four different flipping rigs prepared with different size weights ranging from 1/4 ounce to 1 1/2 ounce.
I’m always looking for the so called spot within a spot which usually provides quality bites. This could be any type of hard cover present within the vegetation, or an area where two types of habitat join one another. I covered a lot of water pitching my bait in the most obvious spots within the vegetation. I caught three quality fish in the three and a half pound range and missed several others. I downsized my hook from a 5/0 to a 3/0 and continued pitching. I caught another three pound bass and a 7 1/2 pound kicker. 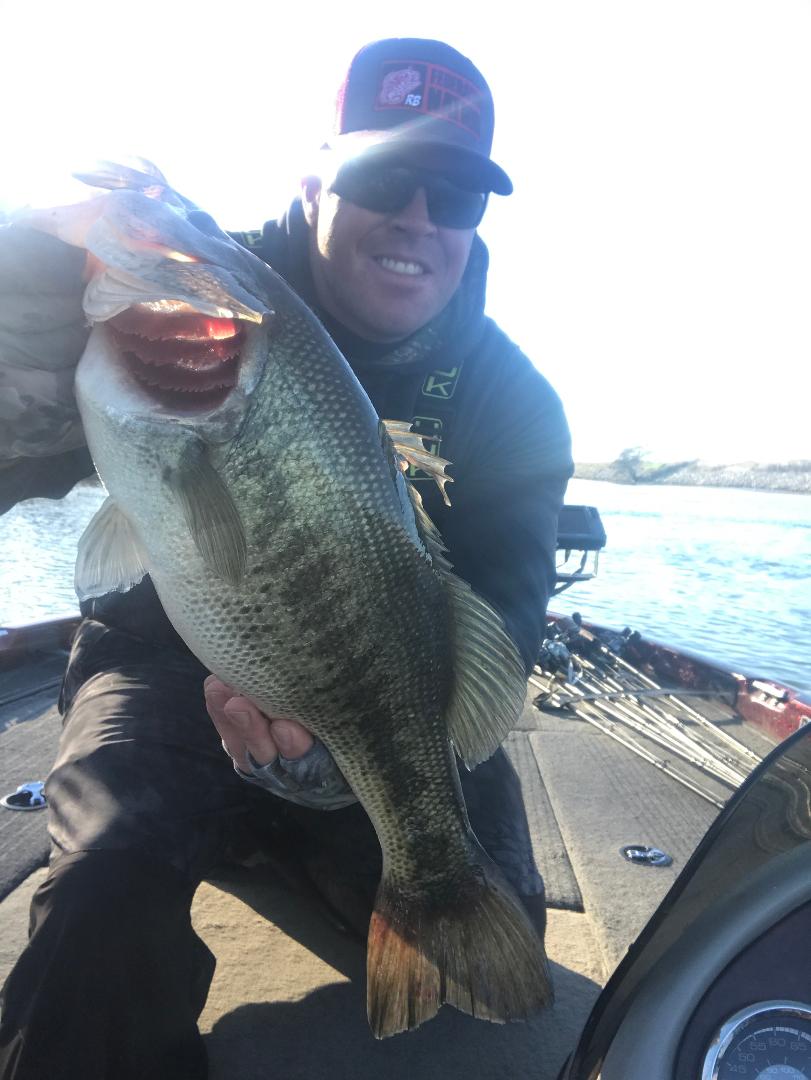 Overall it was a productive day on the California Delta. I put a descent sized bag in the boat considering the conditions and established a solid pattern during post frontal conditions. Its definitely a lot of work flipping cover for several hours covering lots of water but if you decide to commit to the technique you’ll be rewarded.
If you have any questions regarding this report feel free to email me at bigbasssniper85@gmail.com. If you’d like to book a trip with Sick For It Guide Service feel free to call me at 209-345-7721.