Highs in the 70’s, with slight wind on Day 1 and slightly variable Day 2

Water is muddy to Stained, 6” to 2’ visibility depending where you were\

On that Friday the 16th, my partner Chris Perez and I got to spend about 6 hours on the lake, for a pre-fish for the Chamber of Commerce tournament, in the morning. We haven’t been on the lake in a while, so we had our work cut out for us to find and mark fish. We spent the whole day up in the North (which is actually the NW end of the Lake) because tournaments are won up there, as opposed to the South end. The mornings were cold, 38 degrees with frost on the boat, so you are in your winter gear to start the day. Within a few hours you were pealing gear of,f as the day warmed up to the mid 70’s. As you probably know, the lake was over flood stage last week and though the water has receded some, it’s still flooded in a lot places. So there is a lot of debris in the water and floating reeds. Be careful of submerged trees.

We searched and fished a few spots on the McGraw and State Park side of the lake and though we graphed a few we couldn’t get bit. We mixed up our terminal tackle looking for a color to establish a pattern on several baits. We spinner baited the reeds and the submerged trees without success. We threw all the usual Clear Lake baits, A-Rigs, jigs, Rip baits, Underspins, LV’s, the Kitchen Sink, but not a single bite in six hours. Finally got off the lake to register for the tournament, with great hesitation considering those hours.

We went back to RB brother Bob Tyler’s place, where we are staying, to lick our wounds, change some gear, and bulk up our pride, which took a major hit this day. Up early the following morning, new attitude, which was brought on by coffee and encouraging words from my wife. We launched at 5th street, as we didn’t want to be part of the chaos that we were sure was taking place at the Casino, where we needed to go for check in and boat check. A 5 minute boat ride did the trick and we are now sitting out waiting for blast off. 7:30 am and off we go. We swung South and went back to what we knew, and what we knew was it was going to be a Grind. We went another 4 straight hours without a bite. When you’re competitive this plays in your head. We hunkered down and just stuck it out, be persistent. Finally at 11:30 I hook an A-rig fish, on the outside of a tulley point, inside a small bay. He’s small but heck at that point I would have kept a Crappie. Now if we can get 4 more at least my pride would be intact at weigh in. We put the Cal Coast Clip N Cull on him and in the live well he went. Things are looking up and with that the attitude and air on the boat did as well.

Just a short time later, Chris hooks two more, a 2.5 and 3.5 pounder on a flat with his A-rig and they both go in the live well. Things are starting to pop, a little later than we wanted, but we have about 4 hours left, so it’s time to go to work. Everyone we saw was spinner baiting the trees and the reeds but didn’t have a lot of success, so we three the A-rig into the trees as best we could, without hanging up. Some were short casts and some a bit longer and to my surprise I get hammered. It was like someone jerking the rod out of your hand. Chris sees my rod doubled over, the braid on the reel is screaming and he yells it’s a big one, as he rushes for the net. I said it’s a Giant (stealing Mike Iaconelli’s phrase, though I didn’t run all over the boat, lol). I finally got it to about 20 feet out and it had a double flash under the water, which shortly revealed that I had actually caught a double on the rig. One was about 3lbs and the other 4 lbs. So you can see why I thought it was a giant. Booom……fish 4 and 5, we have our limit and we feel much better with about 14-15 pounds in the boat with 3 hours left to cull.

We continued running our pattern at different locations, picking up a fish here and there. Some made the cull and some didn’t. We mixed up our tackle and started throwing other gear. At one point Chris flipped a tree and got smashed. His rod bent like mine and the reel screamed. He had it on for a short distance when it spit the hook. It was frustrating and a downer, as that fish was about an 8 pounder that we really needed. But that’s fishing so back to the grind. About an hour and a half later, Chris gets smacked on the A-rig and boats a nice 4 pounder that definitely culled and we are now up to about the 18 pound mark, with an hour and a half left to fish. We boated a few more fish but most didn’t cull. Booom….day done, streaking back to weigh in.

At the scales, we weighed in 17.67 pounds, so we were pretty close to our estimate. For your information, I had the day before I weighed the Clip n Cull stringers and each one weighed .08 on the scale, so it was easier to keep the Clip n Cull on the fish, rather than taking it off to weigh each cull. When the next fish came in we clipped on the 6th Clip n Cull for the scale or balance beam to make the cull. Thank you Cal Coast Fishing.

Though it was a nice bag, we both knew that it could have been a lot better with the ones we lost, but the day sure turned out better than what I thought after Friday’s attempt. Day 2 Tomorrow, we need food, pain killers and Change gear. Off to Bobs we go.

Day 2, up bright and early, coffee in hand, stopped for fuel and repeated yesterday’s launch and boat check. This time we had a plan to try and duplicate what we did yesterday, but fish clean so we didn’t lose those bigger fish. We repeated our locations and the bait of choice being the A-rig, most of the time. We actually boated the first fish by 8 am, which started the day a lot better that the day before, hopes are rising. We hooked up several more and had our 5 before 11 am. Heck we didn’t boat a fish yesterday until 11:30, so we are pretty pleased knowing we had time to cull, even though our weigh in is about an hour and 20 minutes sooner. We fished the same flats with some success and went to the trees where I got the double, hoping that it was replenished with other fish moving up. After two circles around the tree it was evident that it wasn’t to be. Back to the flats and outside reeds. We each picked up a fish here and there, no evidence of schooling. We had thought today was going to be the day that the bite would have been epic, but it wasn’t to be. We struggled but boated our 5 and started culling. We managed about 13 pounds so far, but the time was running out, and we just can’t seem to find that Kicker.

With minutes left, we made a move and rip baited a windy Reed edge line and Chris got smashed again, but lost another good one that we got to see, maybe a five pounder. It popped the hook, not sure how but he managed. Obviously I had the wrong color on and quickly made the switch. While I was doing that Chris hooked two more on that stretch but lost those too, so we took one more turn to go back through it, as we were pushing our time as it was, but without and success. Our day was done, off to weigh in. We ended up with only 13.76, a bit disappointed as we were in 35th place yesterday, and had a shot at it. We dropped to 53rd out of the 131 boats, with a total of 31.53lbs. Disappointed but we had a great time. Congratulations to RB Bass Angler Rick Novonty and partner Armand Perez on their 11th place finish, with a total of 39.48 lbs, and RB Angler Bob Tyler and partner Brand Little on their 57th place, with a total of 31.03 lbs, and of course congratulations to 1st Place Winners, Randall Doyle and Nick Flanigan with the winning weight of 50.31 lbs. Congratulations to James Lockard and Josh Huggins for big fish of 10.41 lbs. Tough grind for a lot of anglers. For more information on final results go to Lakeport Chamber of Commerce Facebook page. 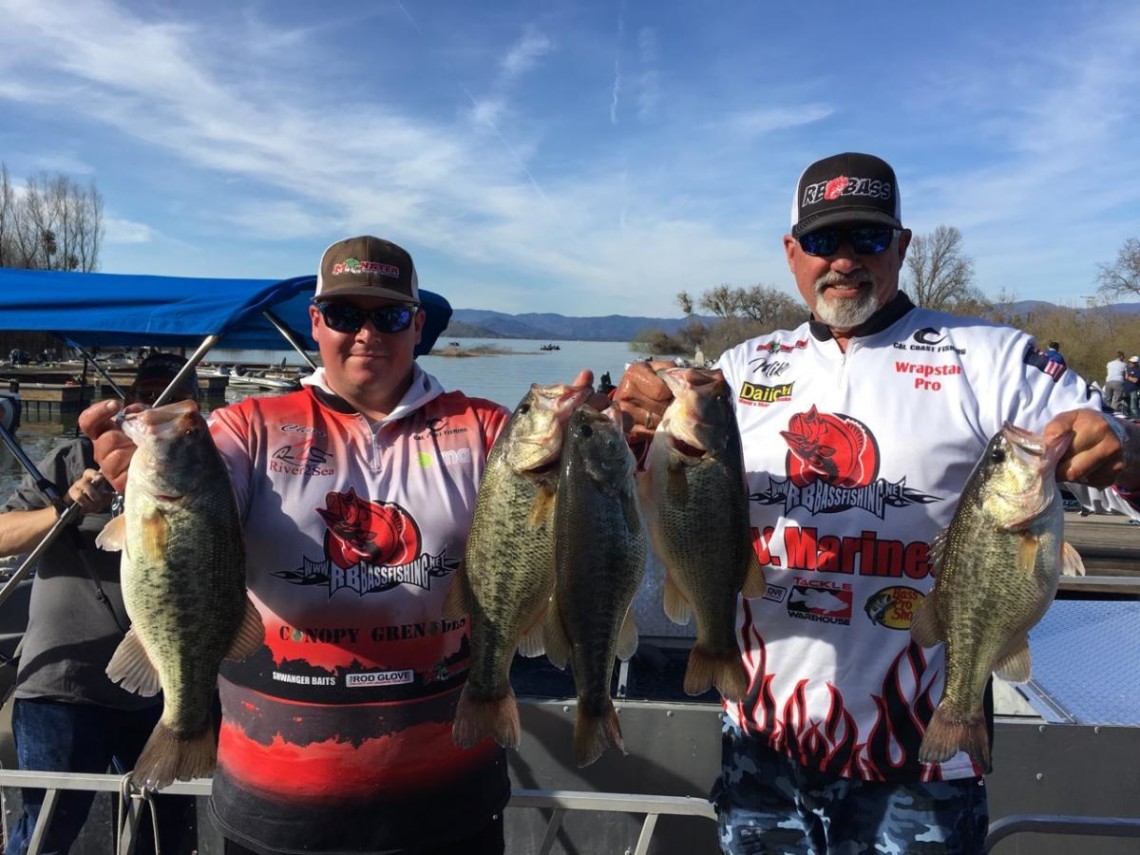 Remember, don’t let the stress of tournament fishing take the fun out of it, and if you get the chance, take a kid fishing!