Finally got to make my first trip of the year out fishing with my buddy Rob deGroot, thanks to Bob Tyler loaning me his boat. We hit Clear Lake fishing out of Konocti Vista Resort. I really like to stay at this resort due to the fact that you have just about everything you need from free launch, free boat slip with power if you rent a room, zebra mussel stamp check, free ice for the cooler, food and drinks from the store and casino restaurant. The lake temps ranged from the 52 in the morning to 57 by late afternoon on the upper lake. Water visibility was about 3 to 4 ft. just about any where we ran. We focused on fishing creek mouths and coves with tules. We also fished some rock points and banks. The crappie spawn is going right now and there are huge numbers of big crappie up shallow in the protected coves. We never really saw any bait fish to speak of but I talked to several other fisherman who said that there is a ton of shad in the neck of the narrows and into Rattle Snake. I also talked to a boat that said the Hitch were up in Rodman. We kept our fishing to the lower south end of upper lake from Rocky Point to the State Park. Rob was tearing them up on both a orange or red/black colored spider grub on a football head jig. Most of the fish were 1-3 lbs. males. He also caught a nice fish on a shad colored spinnerbait. I fished big swimbaits and glidebaits hunting for a big fish. I never got the big fish I was after but the big fish are there. The night we arrived I talked to a guy at the casino ramp who just pulled out and he showed me a picture of a 11.5 he caught on a GIANT glidebait. The next morning I watched him catch a 9.5 on the same bait and then saw him later in the day photo and release a 10.5, 8 and 7. I talked to him again that night at the ramp and he showed me his bait. Big, slow sinking and custom made in Clear Lake. I thought I would eventually get a big fish on my  previously successful baits but it just wasn’t my time. That’s fishing! As you can see by the pictures they do like to eat the crappie. We rescued this fish after we found her floating near Rocky Point with this fish wedged in her mouth. After a little surgery we separated both fish alive and let them go. Thank you for checking in with RBBASS and I hope this report helps dial you in to a livewell full of toads on your next trip to this awesome fishery. 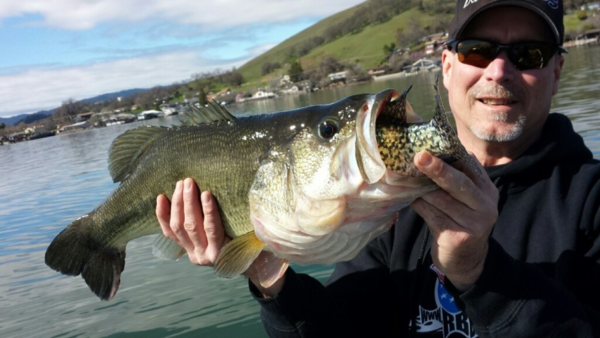