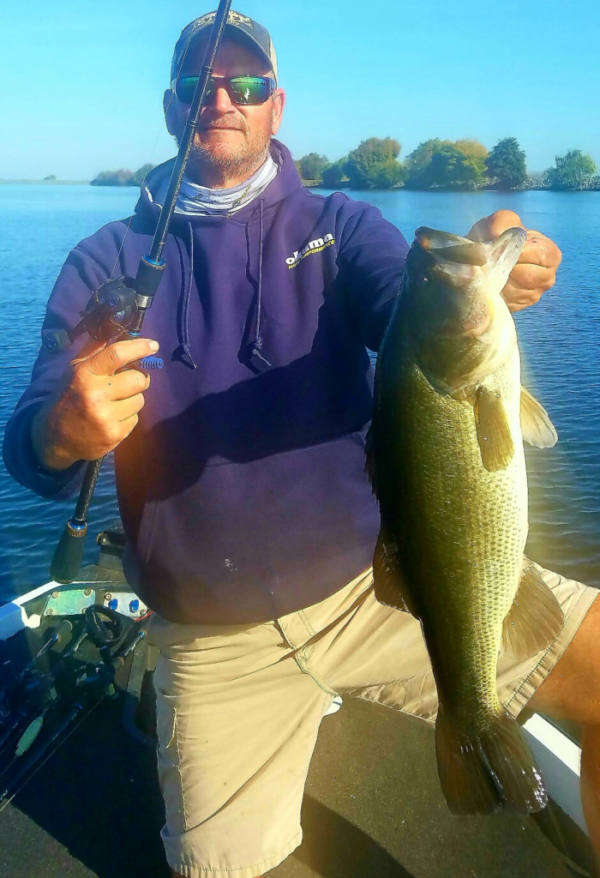 On Saturday, November 12th, I paired up with Johnson Outdoors and Navionics Pro, Travis Huckaby, for the 2016 Coors Light Open Championship out of Stockton at Ladd’s Marina. The days leading up to the tournament I had been on the fish pretty good and was certain that I had dialed in on which two baits were going to ensure the big bites. Our game plan for the day was to focus on using the River2Sea Ripbait and the River2Sea Rover. We decided to run south and snag about 10 to 12 pounds, wait for the tide change, and then start making our way back to Ladd’s while targeting the bigger fish that were going lock us in to the leader board.

When the tide started coming back in, we had hit our goal of five largemouth weighing in at 10.33 pounds, which meant it was time to buckle down and hone in on our catch and rip two or three game changers. As we approached the area that the big fish had been holding up all week, Travis was throwing the River2Sea Ripbait and I was throwing the River2Sea Rover. Travis made a long cast, made a couple of jerks, and then on the pause it happened; the line jumped and we both knew in that moment that it was the big fish we needed. The rod doubled over and it was pulling some major drag, the first words Travis said to me were “it’s got to be a striper!” After a couple of more pulls, we could see it surface and swirl about ten feet away from the boat and could clearly identify that is was in fact a largemouth, and a considerable one at that. But no sooner than we were able to be sure that it was a big largemouth, it was gone…it came off! If only it had been a few feet closer to the boat, we would have for sure gotten a net around it. The same scenario repeated itself one more time that day, although the second didn’t meet the first fish in size, it still would have made our two pounders in the live well seem substantially smaller. I patiently spent the remaining time working the back of the boat with my Okuma TCS frog/swimbait rod in hand hoping that at any moment a giant would blow up on the bait and save the day.

That night, after the tournament, I sat in my garage and was looking at my spooled Helios with Fins 50 pound braid that I spent the entire day cranking, thinking about the things I could have done differently and remembered that this sport wouldn’t be a sport if the fish were a guaranteed catch. That the triumphs of the sport wouldn’t be as rewarding without the lows of missing those one or two big fish that would have nabbed the top spot. It seems silly, but this thrill…the hunt…is what keeps me out on the water looking for the next honey hole. So until next time fellas, get out there and have some fun, because you can guarantee I will be!

If you enjoy my fishing adventures, find me on Facebook for daily updates.