This Delta trip all started with an invite from my friend Anthony Souza, this would be my first major venture away from the house since my injury. Let me tell you I was extremely nervous and almost told him no, I decided to take a chance and see what happened. I made sure to hydrate take all my meds and get some sleep I figured this would give the best chance to fish for the day or 6 hours anyways. Lucky for me I was right and all the preparations led to a very fun and successful day on the Delta.

We launched at B&W Resort came out turned right and headed towards Frank’s Tract. On the way down I had Anthony stop at one of my favorite islands, I picked up the River2Seausa Whopper Plopper in the Blue Blood color. At the south end of this island is a big spawning flat that drops off into deep water, I  know this time of year the islands that have room to spawn on will hold those post spawners. With the fourth or fifth cast a nice size fish blew up on my bait this would happen five more times on this particular island with no successful hook ups. The original plan was to run south but we stopped at a tulie berm in Frank’s tract and while we didn’t catch anything my partner decided he wanted to see a little bit more of the middle delta. Here was a cool part; after that he let me drive his new Nitro Z-20, that was awesome. FYI, that is a badass ride. Ok, from Frank’s we headed to a a couple of my regular destinations, I was still wielding the Whopper Plopper making casts up on the shallow 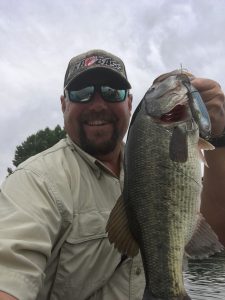 areas of the islands and pulling out towards deeper water. When there was small pockets that the plopper wouldn’t work the river2sea bully-wa frog was used to look for fish. We had both started out with a white frog tied on but after only getting a few swirls it was time to switch to a darker color, I chose black and he picked dark green. I actually landed one 2+ pound bass on the black frog.  The bait that would do the trick for the rest of the day was the Plopper.

Now we just needed to find the pattern and we did that as well. What we found was that islands that had pronounced spawning areas had what I feel are resident fish. They don’t migrate away from the islands because its just to far to swim. One of the nicest parts of the trip was to see how much the high water of the winter cleaned out the hyacinth from a ton of the areas I fish. This was crucial to my bite, for the past couple years some of my best water has been taken away due to the hyacinth finally its open again should make for a good year. One of the other keys was lay down wood when we worked the flats that had wood the bites came in bunches. The first fish that I landed on the Plopper was just about 6 pounds and it came right off a lay down log in about three feet of water at high tide. Up till then which was about 8am I had about six or seven good fish hit and get off, it was becoming frustrating but I knew eventually they would eat it. A few casts later I landed my second fish  then a third, fourth, fifth, etc, to say the least they started to chew. I was still getting fish on and losing them and getting fish that were short striking but it was still fun. I’m going to experiment with my hooks after this, try some Trokar EWG’s I think. Unfortunately for my partner he caught nothing had a couple on that came unbuttoned but no landed fish, he never picked up the plopper just kept fishing the Chatterbait, Frog and Grassburner to no avail. This just goes to say that it was not an easy day out there, the fishing was tough. I can honestly say this was the best day I have ever had with the plopper and now that I have a better grasp on its potential it will be a staple in my Delta arsenal. At twelve it was time to start heading back so we ran all the way back to Perry’s and tried to fish the weed line I had two more blow ups both appeared to be in the two to three pound class. Time for pictures then head 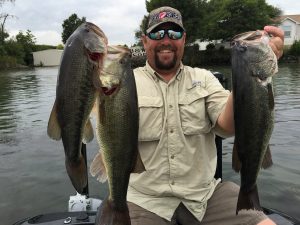