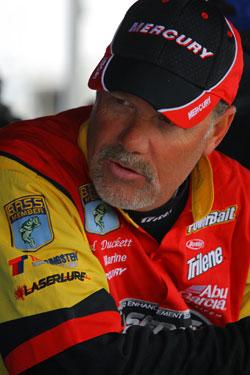 The Elite Series starts this week, and we’re in the land of the giants — California. Giant fish! This should be fun.

Most of the Elite Series guys remember three years ago what it was like to fish the two places we’re going to see during these next two weeks: the Delta around Stockton for the first event and then Clear Lake the next week.

Three years ago I had a bad event and a good event — bad in the Delta and good at Clear Lake. While I’m obviously hoping for two good events this time around, here are a few thoughts about what we’re all going to encounter. (And then I’d like to add one final word about the Classic.)

The thing we all know is that we’re going to find big, big fish the next two weeks. Aaron Martens won the Delta event in 2007 with more than 85 pounds. It could be the same this time around if the weather settles down.

But weather is an issue. It’s been colder than usual in Northern California, the same as it was in Alabama at the Classic. Cold weather, wind and cold water will give us challenges, just like colder than normal weather did at Lay Lake. And you’ve probably read that we’ve been facing cold and serious wind.

If you’re not familiar with it, the Delta is a tidal river system. It’s massive, and in some areas it’s a big, muddy basin. You have places where the tides move 4 to 5 feet. You can go in sometimes and there will be plenty of water, but then you come back at low tide, and it’s a sandbar. We’ll all be paying attention to the tide charts.

I’ll be at a disadvantage because I don’t know the system. The Delta is so big it would take two weeks to learn it. I had never been out here before when we went in 2007, and I haven’t had an opportunity to spend any time here since then. So I’ll do the only thing I can do. I’ll learn what I can in two and a half days and try to stay within my limits.

Mike Iaconelli is a great angler, and he said he tried to fish too much water three years ago. He’s probably going to restrict his movement this time. I’ll probably do the same. One thing about pro anglers is that they’re so good they usually don’t make the same mistakes more than once.

I had two or three good areas in 2007, and it’s possible that I’ll try to capitalize on those areas this time. We’ll see.

Another thing I was thinking as we head into this event is how we all try to avoid having a really bad event. One bad event can kill your chances for a Top 12 finish in Toyota Tundra Bassmaster Angler of the Year points. For example, if I have a bad event at the Delta — and it could certainly happen because I’m not nearly as familiar with this water as other anglers — I’ve got to make sure I finish somewhere around 60th and not 90th. If you finish around 90, you’ve got a whole lot of ground to make up.

One last note, and this time I’d like to go back to the Classic. I’ve been so wrapped up in what I did wrong at the Classic that I neglected last time to say one important thing, and that is: Congratulations to Kevin VanDam.

I’ve talked a lot the past several years on my Web site blog about my admiration for KVD. I admire the way he prepares, the way he executes and the way he carries himself on our tour. And while I was griping about the way I didn’t execute, I failed to mention what a masterful tournament he and the other anglers in contention on Sunday fished.

They found the right area, they stuck with their game plans, and they finished the tournament the way I wished I had — in contention on Sunday.