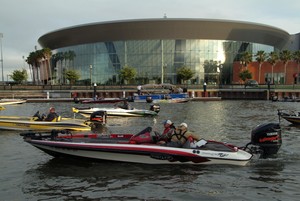 STOCKTON, Calif. — As the full field of FLW Series pros and co-anglers departed Weber Point Event Center marina shortly after 6:30 a.m. amid cool temps and cloudy skies, there was a buzz in the air that the third event of the 2010 season might not produce the behemoth stringers that bass-fishing fans have grown accustomed to seeing at the California Delta – one of the nation’s most prolific fisheries.

Boasting over a thousand miles of waterways as well as numerous channel islands, the West Coast’s largest estuary is revered as the crown jewel of bass fishing in the lower 48 states. However, FLW Series anglers cautioned that this time around bountiful stringers featuring 10-pound-plus trophy largemouths – a staple at previous FLW Outdoors tournaments – might be few and far between.

“The Delta is really not living up to its reputation so far,” said FLW Series pro Mike Folkestad of Orange, Calif. “Most of the fish are in the postspawn mode and are now transitioning to summer. The fish are smaller and leaner, and they’re doing a lot of different things right now. Personally, I just can’t seem to get on any type of solid pattern. It’s a little frustrating.”

National Guard pro Brent Ehrler agrees that the bite is generally tougher than it has been in the past.

“The fish are kind of all over the map right now,” said Ehrler. “The fish are postspawn, and it’s been kind of cold here lately. So maybe that’s the reason. I think I could catch 15 pounds, but then again, I could easily come back with a lot less.”

Folkestad said that because the fish aren’t really congregating on one set pattern, anglers are going to really have to adjust and employ their entire bass-fishing arsenal in order to have success.

“You’re going to see people throwing topwaters, jigs, worms – all kinds of baits this week,” said Folkestad. “I’ve talked to a lot of anglers, and most seem to be having difficulty catching the bigger fish. It might be more difficult, but somebody is going to catch them.”

As usual with the California Delta, the two biggest factors will be grass and the tides.

“Here you always need to fish moving water because it’s really hard to catch them on slack tides,” said Folkestad. “When the tides start changing up, that’s usually the best times to fish. During low tides, the fish will move off the bank and come to the edges of the grass in deeper water. With high tides, they get up over everything and come closer to the shoreline.”

“Tides are huge here,” said Ehrler. “It not only determines when the fish want to bite, but the tides also affect the grass (and quality of the available cover). Sometimes when the current is too strong, the grass will really lay down flat, and that can make it harder to catch fish. But when the current isn’t as strong, the grass stays more upright and creates pockets where the bass will hang out. But on the Delta, tides also affect different places differently. Some places will be better coming off a low tide, and others will produce more coming off of high tide.”

As far as cover goes, the key is aquatic vegetation.

“Grass and tules,” said Ehrler. “That’s pretty much what you fish here.”

The entire field will compete during the first three days of the Cal Delta event. The co-angler champion will be crowned after Friday’s weigh-in based on the heaviest accumulated three-day weight. The top five pros will then continue on to Saturday’s final day of competition. The pro winner will be determined by the heaviest accumulated weight from all four days.

Throughout the week, pros will battle for a top award of up to $56,000 in the Pro Division and a Ranger 177TR with a 90 horsepower Evinrude or Yamaha outboard in the Co-angler Division.

In addition to the Cal Delta purse, all anglers will compete for valuable points in the hope of qualifying for a shot at advancing to the 2011 Forrest Wood Cup, slated for Hot Springs, Ark.

During FLW Series competition this week, anglers will take off and weigh in at the Weber Point Event Center marina, located at 221 N. Center St. in Stockton, Calif. Takeoff will commence 6:30 a.m. each morning. Wednesday, Thursday and Friday’s weigh-ins will begin at 2:30 p.m. with Saturday’s final weigh-in scheduled to start at 4 p.m.

Fans will also be treated to a Family Fun Zone from noon to 4 p.m. at the Weber Point Event Center prior to Saturday’s final weigh-in. There will be drawings for rod and reel combos every 30 minutes during the event and a drawing for a $300 Cabela’s gift card at the conclusion of the weigh-in. Activities in the Family Fun Zone include a Ranger boat simulator and assorted fishing-themed games.

All activities are free and open to the public.

Want to watch the weigh in live but can’t make it in person? Then tune in to FLW Live on FLWOutdoors.com shortly before 2:30 p.m. Pacific time to watch live streaming video and audio of today’s opening-round weigh-in.

Coverage of the California Delta tournament will be broadcast in high-definition (HD) on VERSUS. “FLW Outdoors” will air Oct. 17 from 12:30 to 1:30 ET. “FLW Outdoors,” hosted by Jason Harper, is broadcast to approximately 500 million households worldwide.