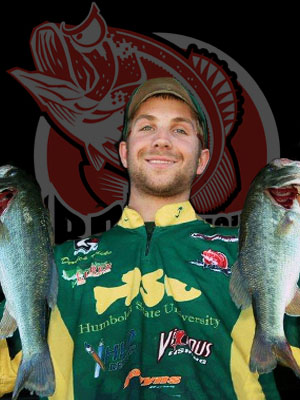 STOCKTON, California – The Fresno State team of Christopher Delgado and Kong Moua dominated the National Guard FLW College Fishing Western Division event on the California Delta Saturday with five bass weighing 20 pounds, 14 ounces. The victory earned the team $10,000 to be split between the university and the university’s bass fishing club – $7,500 for the bass club and $2,500 for their school. The win also helped them advance to the Western Division Regional Championship.

“We started out early in the morning using a dropshot but were only catching smaller bass,” said Moua, a freshman from Fresno, Calif. “We knew those small fish were not going to get us into the top five so we went to some familiar spots I fished in 2009 and 2010.”

“We were hoping to catch some fish that had not spawned yet,” said Delgado, a senior from Fresno, Calif., majoring in history. “We pulled up on our spot this morning and saw some fish on beds and were excited.

“After our dropshot was not working, I switched to a 7-inch Senko and was dead-sticking it similar to winter fishing,” continued Delgado. “I kept it real calm as the larger fish were not moving much and that helped us bring in our five big ones.”

“We put it on the line today,” added Moau. “I did not want this to be Chris’ last tournament and now we are heading to regional’s.”

Rounding out the top five teams and also advancing to the Western Regional Championship are:

College Fishing is free to enter and FLW Outdoors provides boats and drivers for each competing team along with travel allowances. All participants must be registered, full-time undergraduate students at a four-year college or university and members of a fishing club recognized by their college or university.

The next National Guard FLW College Western Division tournament is scheduled for Sept. 24 on Clear Lake in Clearlake, Calif., and is hosted by Twin Pine Casino & Hotel.

ABOUT FLW OUTDOORS
FLW Outdoors is the best in fishing, on and off the water. Anglers worldwide can compete for millions over the course of 191 tournaments in 2011. FLW Outdoors has taken fishing mainstream with the world’s richest fantasy sports game, FLW Fantasy Fishing presented by Straight Talk, where competitors can play for free as well as sign up for Player’s Advantage to gain an edge. For more information about FLW Outdoors and FLW Fantasy Fishing, visit FLWOutdoors.com or FantasyFishing.com.