Jim Graddy won the California B.A.S.S. Nation qualifier with the help of this 8.93-pounder.

The 74-year-old also caught the biggest bass, almost a 9-pounder

ANGELS CAMP, Calif. — Jim Graddy of Shafter, Calif., won the 2017 California B.A.S.S. Nation State Team Qualifier 1 on New Melones Reservoir, March 18-19, and no one was more surprised than he was. “I am shocked that I won,” said the 74-year-old real estate broker. “The first time I had ever been to New Melones was on Thursday.”  At his ripe age, Graddy said he’s not only proud to have won: “I’m proud to still be alive.”  Graddy jokes about his age, adding that after this many years of fishing, he should really be better than he is. But based on his 24.64-pound bag on Day 2, most of his fellow competitors would argue that he’s doing just fine. Graddy finished with 35.35 pounds, eclipsing second place by almost 2 pounds. But he won another honor as well — biggest bass overall. He caught an 8.93-pounder on Sunday, the biggest bass of the tournament by a nearly 2-pound margin. It was mid-morning when the big fish took his Senko and started swimming toward him. “I didn’t even know it was big at first,” Graddy said. His nonboater partner, Louie Marques, asked if he needed help with the net and Graddy declined, saying it didn’t feel like much. “But then I got a little pressure, and it got bigger,” said Graddy, laughing about his rapid change of mind. “I said to Louie, ‘Maybe I do need a little help.’”  The fish was near the dam in 2 to 3 feet of water.

Graddy had used Texas-rigged Zoom Brush Hogs in green pumpkin all day Saturday, when he brought in a limit of 10.71 pounds fishing laydowns. But on Sunday, he wasn’t having much success, and he took a cue from Marques to pick up a Senko instead. He settled on shad and green pumpkin colors and fished the rest of the day with Senkos, targeting shallow grass on the banks. Areas with heavier grass seemed more productive to Graddy than areas with less of it. He would start at a point, work into a cove, then work the other side as he made his way to the next one. “It’s fun to beat these young guys,” said Graddy. “It doesn’t happen often. They usually kick your butt.” Graddy is a member of the Valley Bass Club in Bakersfield. As the top boater at New Melones, he is the first angler to qualify for the 2018 California B.A.S.S. Nation State Team.

Jared Harris of Oakdale is the only other angler to qualify for the State Team alongside Graddy. Harris won the nonboater side on New Melones. Harris, 23, spent his pre-fishing time determining what lures would work best across the lake. As the nonboater, he wouldn’t have the final say in where he could fish each day, but he could at least pick the best tackle that would work anywhere. He settled on a swimbait made by Johnny C’s California Reservoir Lures in casper color, in 3 or 5 inches for the first day, when he weighed in three fish for 7.18 pounds. On the second day, he used Senkos in brown with black and purple flake to bring in 6.97 pounds. “I found that rocky areas with nice grass growing nearby were the most productive spots,” said Harris, who works for Local 1245 Electrical IBEW. “I don’t regret one cast I made,” Harris added. “I felt like I was on my game.” Harris ended with 14.15 pounds, edging second place by ounces.

On the boater side, Graddy was flanked by first-day leader Randy Pierson with 33.39 pounds and Michael Coleman in third place with 31.48 pounds. On the nonboater side, Jay Williams finished behind Harris with 14.01 pounds, followed by Louie Marques with 13.66 pounds.

The next qualifier takes place June 3-4 on Lake Oroville in Oroville, Calif. 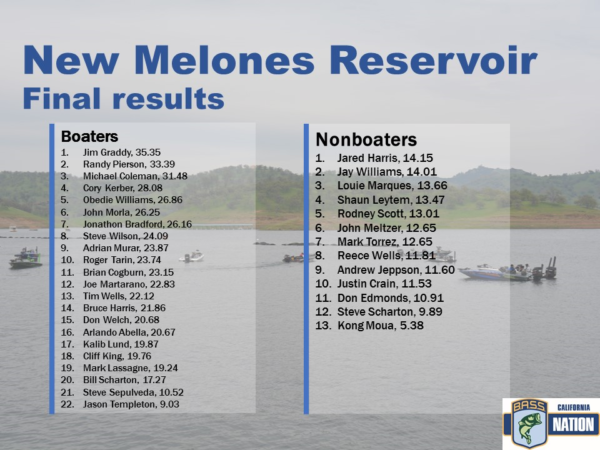