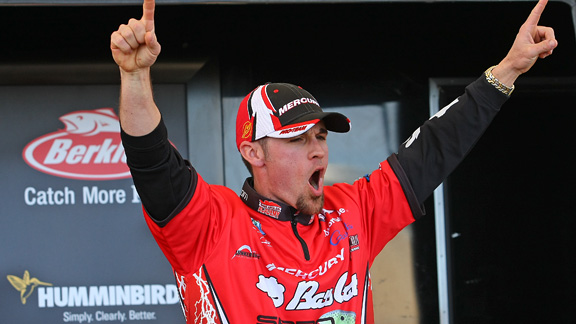 James OverstreetCrews lifts his hardware from the TroKar Duel in the Delta.

Crews certainly seemed to have a horseshoe in his back pocket this weekend. But ultimately, Crews identified an area that many of his Elite brethren overlooked. His success can be directly tied to his spot that was immune to the changing conditions that plagued many on the Delta this week.

Case in point: Crews weighed his heaviest limits on Friday and Sunday. The conditions on those days were on total opposite ends of the spectrum with Sunday producing blue-bird skies while Friday rain, wind and frigid conditions prevailed.

The four-time Bassmaster Classic qualifier concentrated on a dead-end slough that held deep, thick hydrilla in 4 to 8 feet of water. He worked the flipping stick slowly and methodically. As with most of the competitors this week, patience was a virtue for Crews as keeper bites were few and far between.

But when he got one, he made it count. He primarily used a sweet beaver through the first three rounds of competition but switched to a Gambler BB Cricket on the final day. The move paid off as Crews brought the only 20-plus pound limit — actually 20-8 — to the scales on Sunday.

“I found that area the first day of practice and actually only got one bite in there,” said Crews, who took his first BASS victory Sunday. “But there was something that looked right there. The water was deeper and the fish weren’t moving. And they were kept off the bank because of the boat traffic. The bite wasn’t tide-dependent and I knew it could be a winning area if I executed.”

The victory is sweet redemption after an “atrocious” beginning to the 2009 Elite season. Though he missed out on qualifying for the 2010 Classic, Crews finally felt he was starting to put something together late last year. Mentally, he said, he was in a good place and he was able to extend the good vibes into this week. Now, his confidence is soaring.

“Right now, I’m in such a good place with my fishing,” Crews said. “I don’t know how I will do at Clear Lake (the next Elite event) but I know I have a chance of winning. And that feels good.”

Reese is no stranger to just missing out on victory — he lost the 2007 Classic by mere ounces — but even with his unfavorable luck, the sting of losing by one ounce was evident. Like Crews, Reese was able to piece together solid days throughout the event while other anglers were all over the map.

Reese fished two areas Sunday and switched up his bait choice, a chigger craw, creature bait and chatterbait. He explored new water in the morning that led to little success. But then he moved to his primary area — a long run from the launch location — and was able to put together 18 pounds, 12 ounces, a weight he thought was good enough to claim his fourth BASS victory. 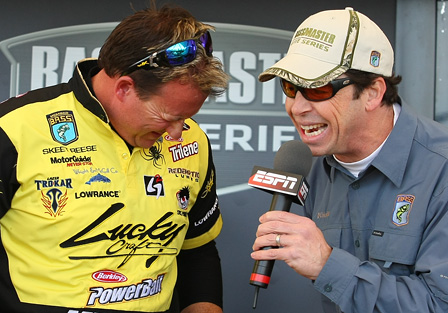 James OverstreetSkeet Reese winces when he sees his weight was one ounce less than Crews.

Reese wanted nothing more than to claim victory in front of the vibrant home-state, final-day crowd of 5,900, but it wasn’t in the cards.

“I’m speechless right now,” said Reese, the 2007 Toyota Tundra Bassmaster Angler of the Year. “I had a great week overall but I hate finishing second. I really hate it. All you can hope for is to keep positioning yourself to get the victory and they will come.”

Still, Reese, who is at the top of his game, has his eyes on a larger prize. Reese earned valuable Toyota Tundra Bassmaster Angler of the Year points and his top nemesis, Kevin VanDam, who has scored the last two AOYs, stumbled a bit here. But the season still promises to be a back-and-forth battle between the two titans.

It was Saturday leader Greg Hackney of Gonzales, La., who opened the door for Crews and Reese. After a tremendous 25-plus pound limit Saturday, Hackney stumbled Sunday, failing to catch a limit.

“I had two on that could have made the difference,” said Hackney, the 2004 Rookie of the Year. “But that’s on me.”

In fourth was Mike Iaconelli of Pittsgrove, N.J., with 70-4. Rounding out the top five was Shaw Grigsby of Gainesville, Fla., with 63-11.

The next event for Elite Series anglers is the Golden State Shootout on fish-factory Clear Lake on March 18-21. The Lakeport, Calif.-based event set then-BASS records in 2007 and with warming conditions promises to be another shootout. The Elite Series is comprised of eight regular-season events and the Bassmaster Elite Series Postseason.

Fans can catch extended analysis on Bassmaster.com and ESPN2 will recap the entire competition on the Sunday, March 28, edition of The Bassmasters at 10:30 a.m. ET. The episode will air again Saturday, April 17, at 10 a.m. ET.