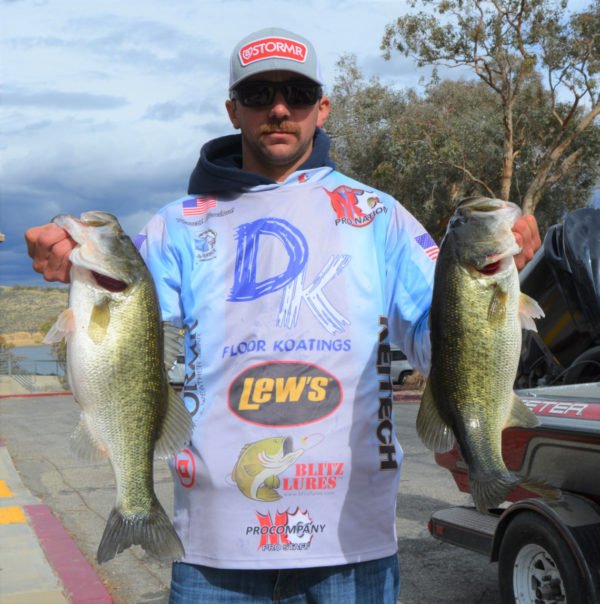 CASTAIC, Calif. — Kenneth Cleveland of Bakersfield won the 2018 California B.A.S.S. Nation Qualifier 1 on Castaic Lake, March 17-18, by a pound and a half.

Cleveland, who is a member of the Valley Bass Club, has only fished Castaic a handful of times, but his pre-fish made the difference. Before Saturday’s launch, he had determined that what he was going to do was drop shot, and where he was going to do it was at Kong Island and a big stretch in the back near the dam.

“I drop shotted two different worms,” said Cleveland after his victory. He used two colors — a cinnamon blue and a custom color that he describes as smoky — in a 6-inch Stroker Worm and a 4-inch Butler. “I fished it anywhere between 15 and 25 feet of water.”

His friend and fellow competitor, Ray Huff, makes Stroker Worms, and the pair had handpoured a “couple hundred” before the tournament started. By the end, Cleveland only had nine left.

Cleveland said he thinks the winning tactic for him was using 24 to 30 inches on his drop shot, rather than a shorter length, and he also said his area paid off well for him. After catching his 19.05-pound limit on Saturday, he left the area alone until he could get back there and catch his Sunday bag of 14 1/2 pounds.

Cleveland used an iRod Air Drop Shot Rod with a Lew’s Gold reel and a Gamakatsu hook. He ended the tournament with 33.58 pounds over two days. Brian Kennemer, also of Valley Bass Club, came in second with 29.65 pounds.

Jim McLaughlin of Central Valley Bass, won the nonboater division with 13.20 pounds. It was a two-day tournament, but McLaughlin caught all of his weight in one day. After coming in empty-handed on Saturday, he returned to the weigh-in on Sunday with three big bass, one of which weighed 5.06 pounds.

Nonboater Frankie Rios, also of Valley Bass Club, caught the biggest bass of the tournament, a 5.56-pounder, on Sunday.

Cleveland and McLaughlin are the first pair of winners on the State Team for 2019. The winning boater and nonboater of each qualifier in 2018 will join the team, and the remaining 12 spots will be filled by the top points finishers. The next tournament is April 28-29 on New Melones Reservoir. 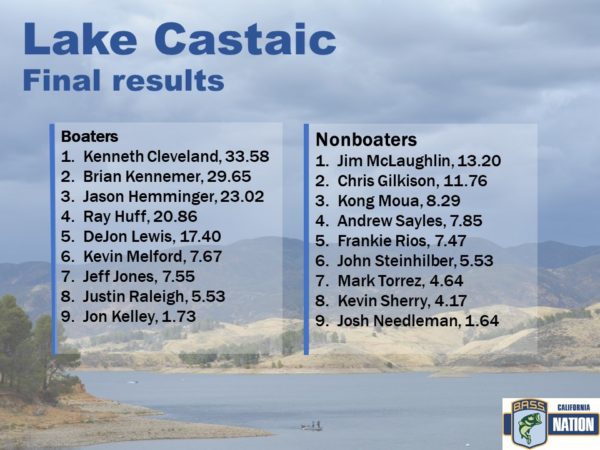