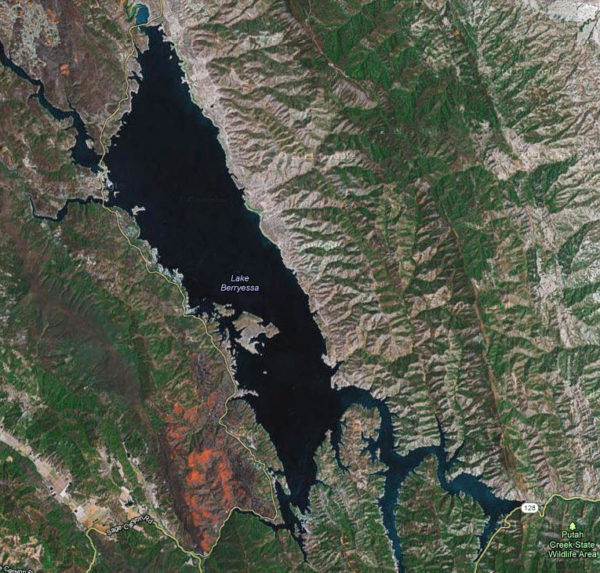 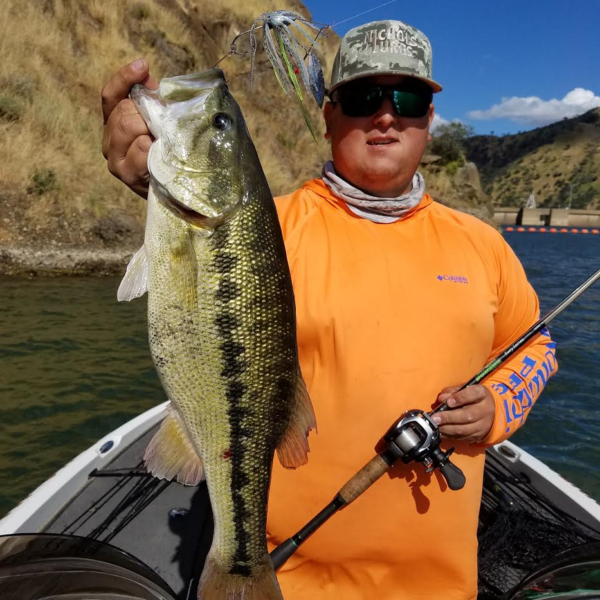 I spent the last 2 weekends fishing Lake Berryessa in preparation for the 3rd BBT Northern Region event of 2017. Last Friday morning, May 5th, I put my boat in the water at Markley Cove and to my surprise my Humminbird was showing 72.2 degree water temps. I ran through the narrows up to the North end of the lake and started fishing near spawning areas. I pulled up to a point leading to a major cove and started throwing a Reaction Innovations Vixen. No more than 3 cast later I had already gotten my first bite. I kept throwing my spook as I fished further in to the cove and was rewarded with a handful of bites. I was also able to pick up a few more on a 3.8″ Keitech swimbait. I left this cove with about 8 fish but none larger than 2.5lbs. I continued to fish points and coves with success on every stop. My top water pattern continued throughout the entire day. Towards the end of the day I could find a point that had a few better fish on it. I landed a 3.25lb smallie that had another clone with it and I was also able to get a 2lb spot that had a herd with it and a 6lb largie following them. I later checked some deeper water with a jig and a Shwanger baits 6″ whiptail on a drop shot. This lead to a few more bites but nothing over 2lbs. I got of the water around 2 o’clock with a small limit for about 12lbs.

The following Friday, May 12th, I was able to get out again. I launched out of Pleasure Cove at around 10 o’clock. This day would fish a little different being that earlier in the week some wintry weather had come through and dropped the water temps to the low/mid 60’s. This day there was 15-20mph winds from the northwest and the entire lake had white caps on it. With that being said I chose to focus in the narrows and near the dam. I started fishing coves that were protected from the wind in an effort to maybe find some bed fish but that was a bust. It wa s an issue the previous weekend where I also did not see a single bed fish. While looking for bed fish I blind casted a spook and tubes. I only had one small bite on the spook but caught a handful of 1.5-2.5lb spots on the tube and a 3lb post spawn smallie. After a few hours of looking for beds without success and catching a ton of rats I decided to fish some wind-blown banks and get on a reaction bite. I threw a small Keitech swimbait without success, then switched to a spinnerbait and started getting a few bites. Later in the evening I pulled up to a windy bank near the dam and was rewarded with a 4.8lb spot and 2.3lb spot both on the same Nichols Lures Pulsator Spinnerbait (1/2oz double willow in bombshell shad).

The next day was tournament day. That morning I hopped aboard my partner Bob Tyler’s RB Bass/B3 Solutions wrapped Ranger 520 and got ready for our day ahead. We started the day near Big Island throwing top water and nail weighted Senkos. We got on the fish very quickly and had our limit within about 30 minutes. We had a small limit of smallies for about 10lbs. We continued to fish around the island and we picked up 3.5lb Largemouth on a weightless senko then another 2.5lb largie shortly after. We then left and headed up to Putah Creek where we were unable to upgrade. After leaving Putah we stopped near the mouth of Pope Creek and found a bunch a smallies on beds. We looked through this whole flat full of beds but only saw 2 that would have helped our limit but were unable to get them to go in a timely manner. We then headed back down near Big Island and made 1 or 2 very small culls then had to head back in to weigh in.

Ultimately, we caught a ton of fish. Catching them was not the issue but finding the big bites was. Our best Baits for the weekend were a Reaction Innovations Vixen, Nichols Lures Pulsator Spinnerbait, Yamamoto Senko, & a Shwanger Baits Whiptail. The links to each of these baits are listed below.