February 24, 2019 Jackson Kayak KBF Tail, had it’s first tournament of the season at Lake Berryessa, California. Drawing 147 kayak anglers from Utah, Idaho, Arizona and all over California. First place receives $2,000 and the top 10 percent of the field earn qualifying spots in the 2019 Regional Finals. The finals are at Clear Lake, California and the 2020 National Championship is at Lake Guntersville, Alabama.

This was my first kayak tournament I have fished. I arrived at Lake Berryessa late Friday morning for pre-fishing. I launched my 2018 Hobie Outback Kayak at Oak Shores planning to fish around Big Island, then heading over to the East side of the lake. After covering over 8.5 miles and throwing a little bit of everything, I managed to catch only one 13.5 inch largemouth bass. It hit on a 6 inch Roboworm in Pro-Staff Peoples Worm, on a 1/4 oz. dart head. By late afternoon I headed to the Putah Canyon Campground where most of the anglers were camping. This was also the check-in location for the tournament.

On my second day of pre-fishing, my two friends and I launch out of Putah Creek. We planed on fishing our way north, fishing the west bank then heading down the east. Right away we noticed the water was a little cooler. Around 50 degrees and the water clarity minimal. After covering over 5 miles I was beginning to feel discouraged. It was after 12pm and I decided to make the 3 mile trek back to the launch ramp and go somewhere else. After I got the kayak and gear loaded up I headed to Capell Cove Launch Ramp. I arrived there about 2:30 and right away I noticed the water color was much better. I started to fish points throwing a little bit of everything. I caught one 14.5 inch largemouth bass on a dart head. I was off the water just after 5pm and headed back to the campground. After two days of pre-fishing, I only caught 2 fish and eliminated a lot of water. However, talking to other anglers, I wasn’t the only one that was struggling to catch fish.

After thinking about my two days of pre-fishing I decided to try an area and technique. Something that I used over 15 years ago when I fished Future Pro Tour tournaments. My plan was to launch out of Spanish Flat and head to the narrows. The area never gave me big fish, just keeper size fish. In the past I used a 4 1/2 inch Roboworm in Aaron’s Magic with a 4 inch leader to my drop shot weight. The only problem was I didn’t have any Roboworms in that color. Luckily my friend Cy had a pack of 6 worms left and he gave it to me. I owe him big time.

Tournament day I launched out of Spanish Flat at 6 a.m. Official tournament time started was 6:15 a.m. As soon as I made it to the spot in the narrows, I caught a 18 inch smallmouth. I caught it on a drop shot rig off a point. Then like it was 15 years ago my spot produced again, this time the fish were bigger. My biggest was a 18.75 inch spotted bass. My total for the tournament was 84.25 inches, my best five fish. I placed 3rd overall and took home $750. All my fish we caught drop shoting a 4.5inch Roboworm in Arron’s Magic with a short 4 inch leader to my 3/16oz. dropshot weight. All my fish were on points in 10 feet or less. 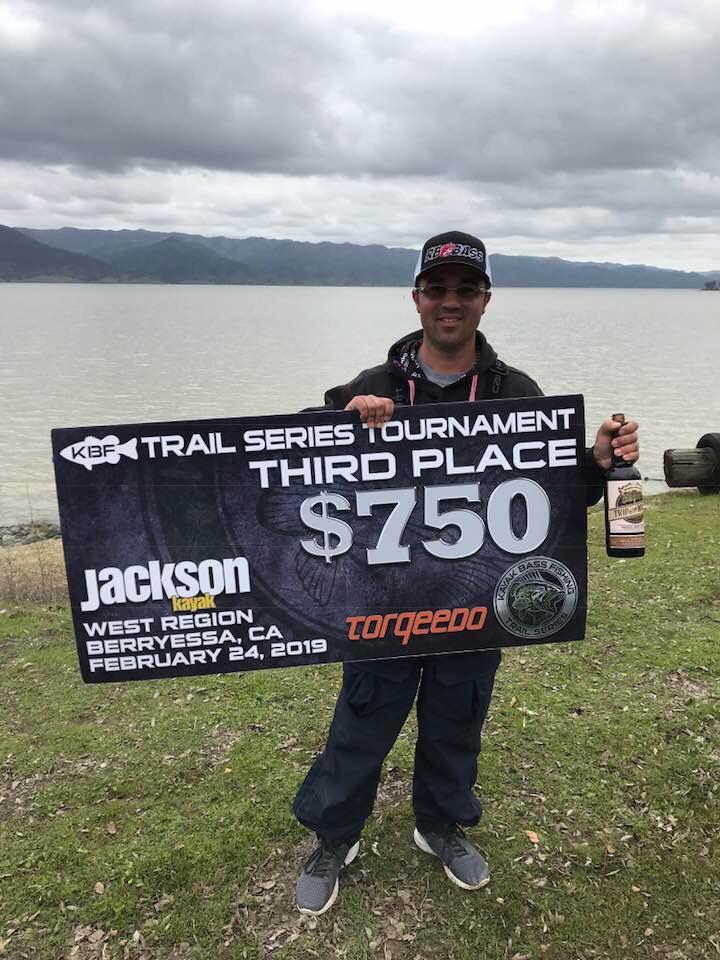 In second place was Kevin Schroeder from Pacifica. He’s a member of Yak-a-Bass Nor Cal and has been fishing Lake Berryessa for over 25 years. Kevin launched his Hobie Revolution 13 out of Spanish Flat, this was his first kayak tournament. On his first cast he caught a 17.5 inch smallmouth bass. He told me that he had a largemouth bass that measured 20 inches, but during the process of try to take a picture of it flopped back in the water. He caught all his fish finesse fishing. His total was 84.75 inches and earned him $1000 for his efforts.

First place went to Kongo Thao from Fresno. He’s a regular to kayak fishing. He fishes Central Valley Kayak Fishing, Motherlode Kayak Anglers, and Yak-a-Bass tournaments. This was his first time fishing Lake Berryessa. Kongo Launched his Wilderness Systems Radar 115 out of the Capell Cove Ramp. He found a long tapering point during practice that was holding good fish. On his way to the point, he threw an A-Rig that produced one fish. The rest of his fish were caught on a C-Rig. His best five fish totaled 86.25 inches anchored by a 20 inch spotted bass, earning him $2,000. 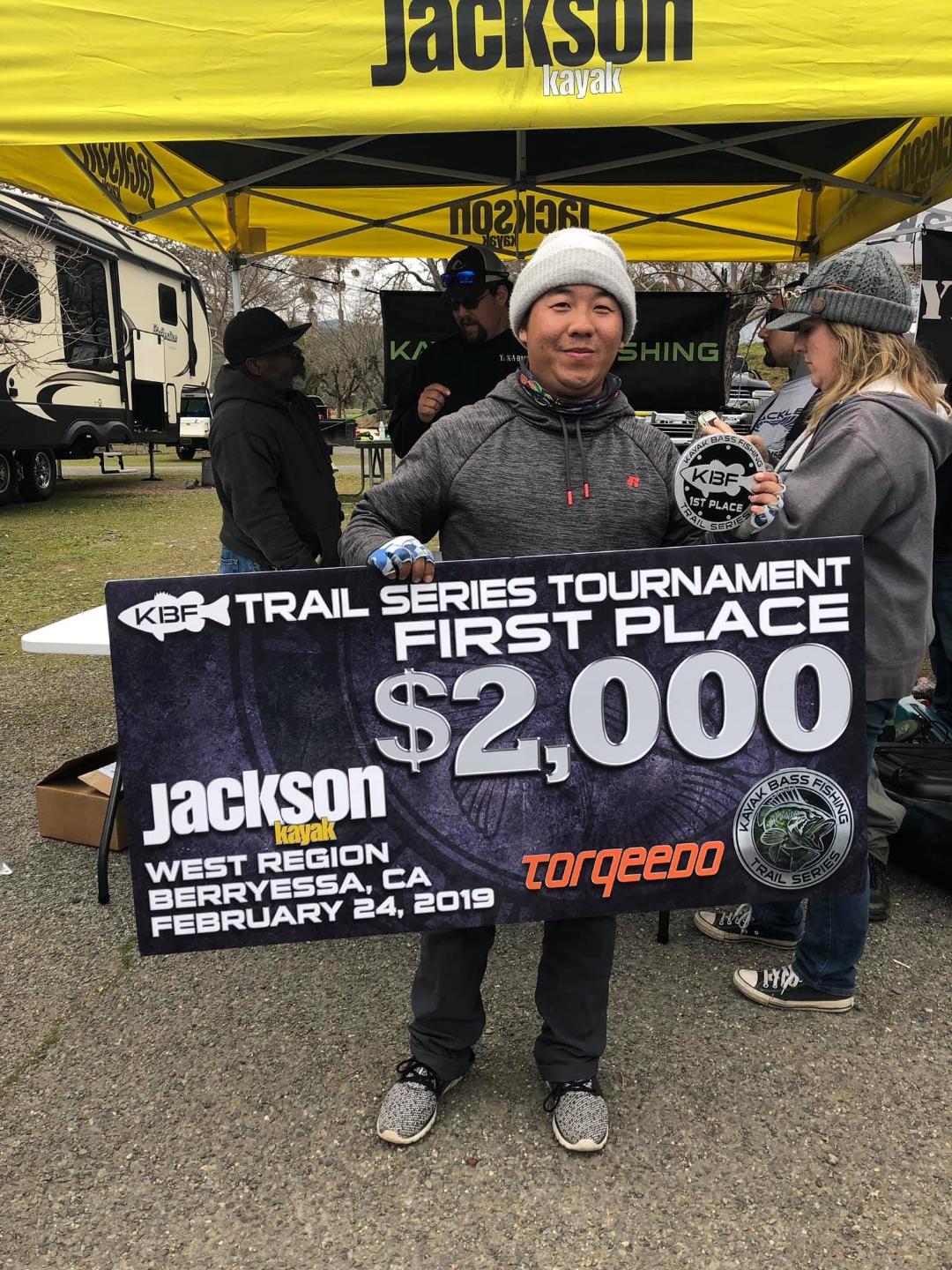 I have been fishing tournaments since I was 16 years old, I have never experienced a tournament like this. Kayak fisherman are a group of anglers like no other. Down to earth people, help each other out, know how to have a good time and they love to camp. The campground was loaded up with kayaks. Everyone was hanging out around camp fires and having a good time. I met so many people that weekend and had so much fun. I can’t wait until the next tournament to do it all again!