Lake Don Pedro Fishing Report
Water temp 56-58
With the rain and colder weather the past two weeks Don Pedro has been fishing excellent for numbers and quality fish. On 12/5/19 a buddy of mine Scott Taylor and I launched out of Fleming Meadows and started on some main lake points that we have had success in the past. After throwing large swimbaits for the first hour with no success I downsized to a underspin with a 4.3 keitech in the electric shad color and picked up two fish in the 2.5 range. We then made a move into a major creek close by to check a ledge that I’ve been catching some quality fish off of the past two weeks. I started off with a yumbrella rig as Scott picked up a big 3/4 jig. We graphed lots of fish but couldn’t get them to go. I then backed off and bombed my underspin in about 45 ft of water. Using a slow retrieve up the ledge my rod loaded up. A nice 6+ pounder came straight up from the deep. I boated this fish as Scott downsized to a ½ jig with a small beaver style trailer. We spot locked for over an hour catching at least 15 fish in the 2.5 to 4 pound class range along with some small fish. 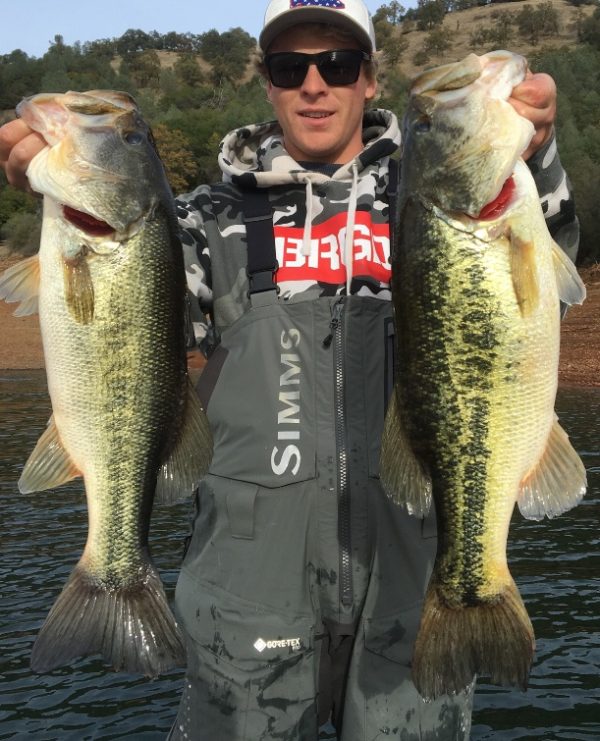 We then bounced around graphing a few areas and fishing them only if we saw fish in the bait or around structure. We caught a few more solid 2+ pound fish in 40ft then headed up into the middle bay area. We continued to graph around then came across a saddle with lots of bait and a couple fish mixed in. I dropped the trolling motor and we both threw where we knew the fish were. Scott then leaned into one in the 40 ft range on his ½ oz jig. We both gasped as the fish surfaced looking like a giant from way out. As it got closer to the boat it ended up being a healthy 5 pounder. We fished the spot for a little longer with no luck after Scott’s big fish. We then ran around trying to learn some new areas and pattern what we found with no success. We finished the day on a spot I haven’t checked in a week and found the fish in 60ft of water and spooned some nice fish up to 3 lbs on a strike king 5.5 flutter spoon.
I’ve been on Don Pedro a lot lately and am staying in contact with the fish. Nail weighted senkos, dart heads, and tubes have also been producing numbers and an occasional 5+ pounder. I have some days open this week if anybody is interested in a guide trip! We can fish light to dark and up to two people in the boat. Yes I am willing to do a big bait trip as well!
Christian Ostrander Guide Service- (209)648-3778