4-2-16
Last weekend Nick Lynch and I fished FPT on New Melones for the central region. I was able to get out the week and day before the tournament for pre fish. I noticed the water was clear and on the rise from the previous week. With water temps 65 and rising I knew the fish wanted to start bedding but were reluctant due to the water rising over the last week. I put the trolling motor on high and started scouting the south end of the lake while also flipping around a texas rigged senko and River2sea S-wavers. I was able to put together a limit for 17-18lbs, but was not seeing any beds. By the end of the day I had only found three beds but two of them had 8-10 lb fish on them. Tournament morning our first stop was on a bed fish. We sat out deep and threw shallow to the bed. Third cast on a senko I got one just under 5. It was still to dark to see so we moved to another spot and finished out a small limit on senkos and drop shotting. We returned to that bed as soon as we thought we could see it. When we got there the big female was reluctant but eventually started nosing down on our baits. She was making a large circles swimming in and out of the bed. Nick was working her with a drop shot, she would seem to get aggravated but then swim out deep. My last flip to her was with a senko, she nosed straight down on it flared her gills and swam off. Nick flipped his drop shot behind the boat, as if in slow mo I watched his rod tick twice before he set the hook, it was her! She immediately began thrashing at the surface and running towards timber. We chased her down and finally got her in the net. After a quick celebration we went back to work. Whether due to conditions or pressure it got tuff. The pattern I had the day before dried up. We made a few small culls throughout the day flipping timber with senkos and drop shots, but nothing we that we thought was going to give us the win. We ended the day with 21.26 and Nick’s big fish went 9.24! It was enough for the win and big fish honors. 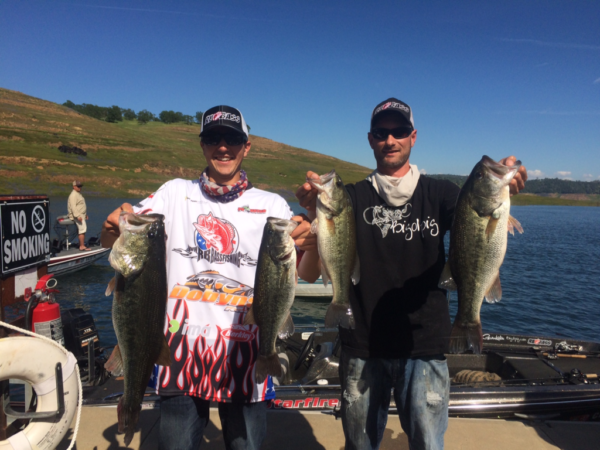