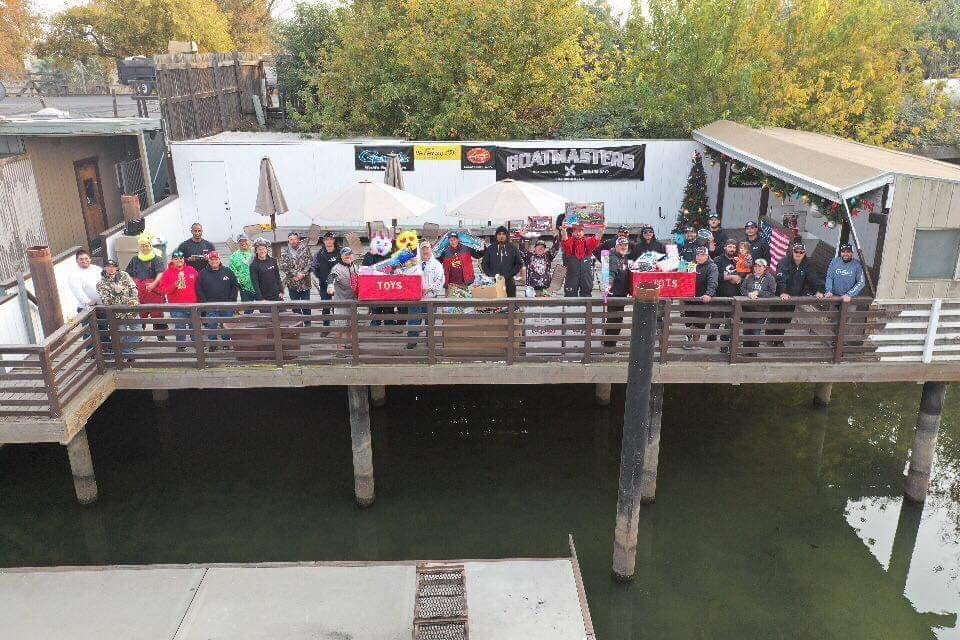 So last Saturday, November 10th was the Marine Corps 243rd birthday and it being 0230 hours, Chris Perez and I headed are our way South, we call it the deep South, to Tracy Oasis, where the Marine Corps Toys for Tots Bass Tournament is being held.

We arrived early, because I miss judged the driving time, but that’s ok with me, because Marines are used to it. With a quick nap in the truck, we checked in, paid the fee and dropped off our toys for pick up, and chatted with old friends fishing the tournament.

With time to spare, we launched the boat, parked the truck and trailer, and wait for the National Anthem to be played, as we here at RB Bass STAND for it! Blast off is cold…. I mean Cold! Chris and I don’t fish this far South, as a matter of fact the only other time I’ve been down here was last year for this event. So the game plan was to run to Victoria Slough, stay there and just fish. Of course to do this I had to wait for my fingers to start thawing out. Yes I wore gloves!!

The water was in the low 60’s, stained in spots but visibility was 3-4 feet. Now we just had to find them. Frog bite was colder than the air, but I had to try it, there were just too many good looking spots! There was too much grass along the rock walls to throw my spook and I gave up the frog quickly and switched to flipping and punching the matt’s and reeds. Meantime Chris pulled the boat offshore a bit, because he graphed the edge of the weed line. He continuously hooked up on a rip bait and also a single Keitch. I did the same so we stuck to that pattern. I switched off using other baits at times, because of the arthritis in my thumbs, and then went back to it when I could.

I picked up a nice one on a thin Tulle open flat, in the middle of the Slough, on a white gold War Eagle Spinnerbait. Anytime we came to a similar flat I covered water with it, while Chris was hammering them on that weed line. Chris also picked up a few on the single Keitch next to the reed pockets near the rock walls. We boated our five early on and went to work culling the rest of our time.

The Time came too soon to scoot back for weigh-in and the run was still cold. We weighed in only 13.46 lbs, but it was enough for 4th place. It was a great time, Travis D.  Adverill and Brittyn Wiggns, along with Tracy Oasis out did themselves on the BBQ and raffle! The only disappointment I felt was that it was only a 17 boat field. I was hoping for a lot more.

Next year, please come out and help support the Marine Corp Toys for Tots Bass Tournament. It’s my understanding that this San Joaquin Chapter collected over 43,000 toys that were distributed to over 1700 families with kids, and they were on track to beat it this year

Thank you all, it was a great time.