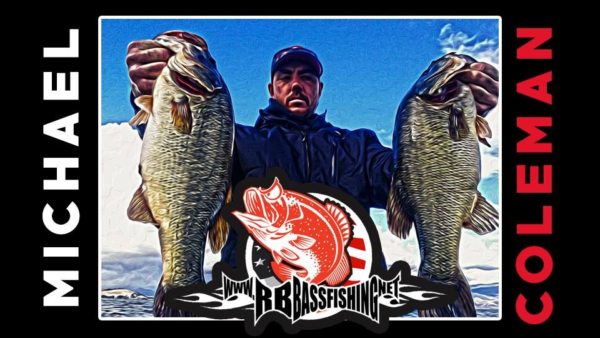 Another weekend at Clearlake with blue bird sky’s. Coleman went in blind, not having time to pre-fish because of the previous lake Mead tournament. The morning was between 62 and 64 degrees, the water clarity was 3 to 4 ft. Michael Coleman drew pro angler Mike Wright for Day 1. They ran south and used both guys water putting together 25.14 pounds. Mike’s past spots that he found have worked this time of year helped out both anglers very well. Throwing a drop shot and a LV yo-yoing up off the bottom, they targeted deep water throwing shallow to deep. The drop shot technique worked the best, letting sit for long periods of time, “dead sticking”.Coleman said it was easy to hold their spots with calm wind all day. Day 2, Coleman drew Johnathan Daughtry and they started at the south end of the lake,  scratching out a small limit. Both anglers decided the conditions had changed and ran north looking for bed fish. Johnathon caught two solid keepers on his water, culling out their two smaller fish in the last hour of the day. Coleman also found and caught two bed fish, which helped out their bag, bringing to the scale 12.13 pounds. That weight helped Coleman boosting him into 2nd place AOY, and gave him 2nd place big fish, AKA BIGOLPIG, with 9th over all for both days. The key thing that helped him most this weekend were locating pre spawning fish in creeks, coves etc. Micheal Coleman’s Sponsors are RBBASS.com, Bigolpig Appearl #teambigolpig, Bass Angler Magazine, Catching  Concepts, Pro Angler Hub, THCG,River2Sea,Pro Cure,Tackleboxlabels.com and EVO LLC