You are here: Home / Bass Fishing News / Michael Coleman wins at the Delta with 27.89 pounds 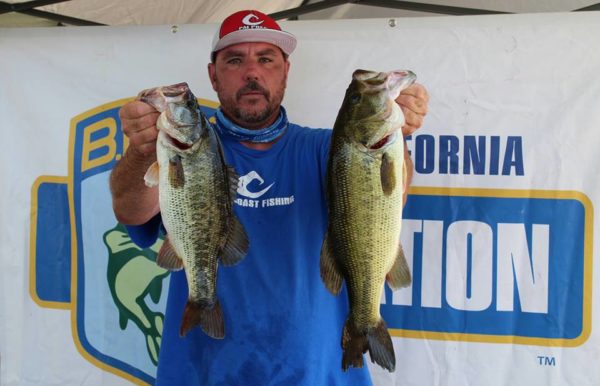 “I wanted to make the State Team with a win,” said Coleman, who’s a member of the Oro Madre Bass Anglers. “Points would have been great, too, but it was fun to win one.” Coleman caught 12.56 pounds on Saturday, including a 3.39-pounder. He followed it up with the biggest bag of the tournament, 15.33 pounds, on Sunday for the win. Coleman practiced on the Delta the weekend before, when he found that the bass were relating to mats adjacent to deep water.

” The tide had to be all the way out to bring these fish to the front,” said Coleman. “I punched heavy cover the whole time.” Other competitors were punching mats, too, but Coleman was targeting deeper mats than the others. “I would target the ledge, right where it dropped off to 22 feet,” Coleman explained. “I was all over the place, too. I would fish a mat for 25 minutes or so and leave.” He stayed between Frank’s Track and Cruiser Haven Marina.

On the second day, he caught tons of fish but couldn’t improve. But in the last hour and a half, that changed. “I went back to a mat where I had caught giant fish before, and I landed two big fish, a 5-pounder and a 4-pounder, and that made the difference,” he said. Coleman punched the mats with a River2Sea Trash Bomb punch weight with a River2Sea Flip Jack Hook on a Phoenix 805 Recon Punch Rod. He used a Bass Assassin Pure Craw and a Yamamoto Flapping Hawg, both in green pumpkin/red flake, on Phoenix 65-pound-test braid. He caught the rest of his fish on a River2Sea Bully Wa frog in black and yellow using a Phoenix Maximum 711. Nick Wood took second place with 25.42 pounds.

Jay Williams of Modesto will join Coleman on the State Team, thanks to his win on the non-boater side. Williams also caught the biggest bass of the tournament, a 6.92-pounder. Williams, who caught 19.33 pounds for the win, is also a member of the Oro Madre Bass Anglers. Luke Johns took second place with 15.22 pounds.

Coleman and Williams are the third pair of winners on the State Team for 2018. Randy Pierson, Jim Graddy, Mateo Gomez and Jared Harris earned the previous berths by winning the boater and non-boater spots in the first two qualifiers. The final winning pair will be determined Oct. 14-15 on Lake Nacimiento, and the remaining 12 spots will be filled by the top points finishers. 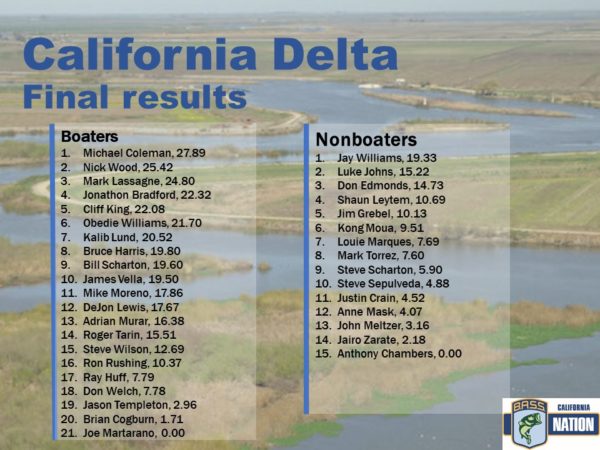