You are here: Home / Bass Fishing Reports / Mid-West Fishing Report by Jeff Jewell
Mid-West Fishing Report
Jeff Jewell
RBBASS
Most of our Mid-Western lakes are still a few weeks away from going into a pre-spawn pattern, with night time temperatures often dropping below freezing. Fishing can be tough this time of year but some success can be found. Here’s a quick report from a few Mid-West Lakes.
Lake Wappapello:
With changing weather patterns and changing water levels Lake Wappapello has been a little tougher than normal. Bass can be caught up river on Canopy Grenade Jigs fished along the river channel stump rows, at times a rip bait or an A-Rig is the best bait. Some Crappie are being caught along deeper channel ledges, minnows seem to be the preferred bait. 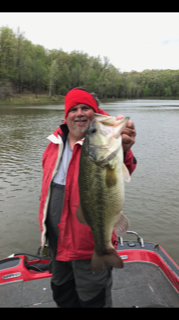 Mark Twain Lake:
Pro Crappie Angler and Guide Kenny Wilkinson reports, Twain is been battling ice off and on this winter but with warmer temperatures on the forecast the pre spawning crappie should produce great sized limits this season. Best bet is to spider rig the creek channel’s and work your way in as it gets closer to the spawn. Using your electronics is key to finding schools of bait and crappie and on sunny warm days they are liable to be in shallow water and high in the water column. Wilkee’s Crappie Guide Service wishes everyone the best of luck and if you just want a fun hassle free day fishing you can reach me on Facebook Wilkee’s Crappie Guide Service or call 573-822-8680. 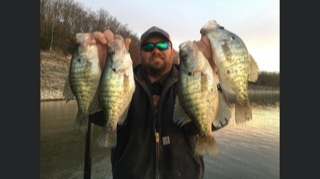 Norfork Lake:
Lou of Hummingbird Hideaway Resort has been on the fish and reports.. It was an exciting day of fishing this morning. I just about did not go with the thunderstorms on the way, but they pushed back the timing so I headed out about 8AM. I first started to troll with a Walleye Deep Diver in a main lake area with lots of bait. Landed my biggest striper so far this year being a little over 17 pounds, then landed a 7 pound hybrid. I decided to try a little crappie fishing and headed into a cove that the wind was blowing in. Landed a few small ones, then started to move and found that the cove was stacked with bait from 10ft down to the bottom. I threw out a couple #7 Flicker Minnows and started slow trolling. They dive about 14 feet. The shad looking one got hammered and I thought it was a big bass. It did not take long to realize it was not a largemouth. 😃 After a 20 minute battle I landed a 18# 7oz striped bass, which beat my early morning personal best for 2020! I marked more big arcs during the fight, but they were heading out of the cove.  I really can’t believe the hooks on the Flicker Minnow held up to the striper. Out of the 2 treble hooks, 4 of the barbed hooks were straighten out and the last 2 held up. I continued to slow troll the cove and landed 4 really nice largemouth each around 20 inches long. The purple color landed 3 of the largemouth bass. All fish were released to be caught another day. 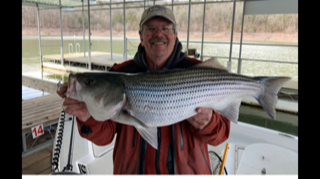 Hummingbird Hideaway Resort is located along the shore on Norfork Lake, has a private boat dock and easy Lake access.
Hummingbird Hideaway Resort
1034 County Road 989
Mountain Home, Arkansas 72653
(870) 492-5113
Table Rock Lake:
Table Rock has been receiving a ton of fishing pressure as anglers we’re getting ready for the weekends BFL event. Most anglers had a difficult time as almost half the field failed to weigh in. One Angler who is on them is BASS Pro and 8 time Bassmasters Classic Qualifier Randy Blaukat. Randy guides between tournaments and has been doing an instructional Jerkbait trip almost daily to Table Rock. He reports that some quality fish can be found on A-Rigs but to catch a lot of fish try throwing a mega bass Jerkbait around points. The key is to find the color and cadence the fish want. There also large school of bass still suspended off shore. Randy can be reached on Facebook if you’d like to take a guide trip with an 8 time classic qualifier. He shares tips and report on his you tube page as well. Randy did an depth Jerkbait article for RBBass that can be found here Randy Blaukat – Jerkbaits 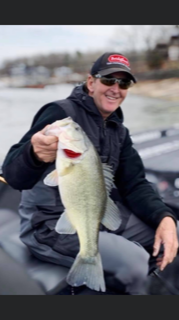