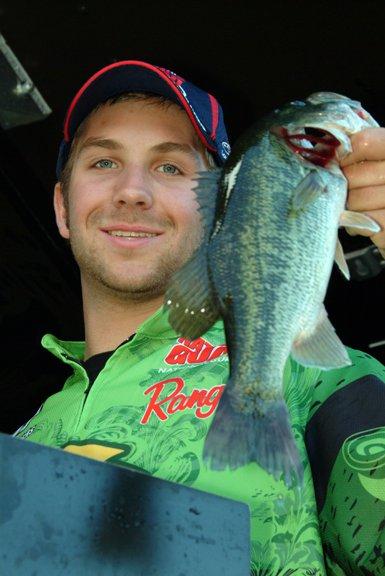 GILBERTSVILLE, KY – The Purdue University team of Charles (Ryan) Spicer and Chris Kaiser won the National Guard FLW College Fishing Central Division event on Kentucky/Barkley lakes Saturday with five bass weighing 15 pounds, 6 ounces. The victory earned the team $10,000 to be split between the university and the university’s bass fishing club – $7,500 for the bass club and $2,500 for their school. The win also helped them advance to the Central Division Regional Championship.

“This is a little unbelievable, we won here last year and to have back to back victories is really amazing,” said Kaiser, a sophomore forestry and natural resources major. “We were fishing along main lake banks with a lipless crankbait. This is an area we found last year and it is just a magical area loaded with fish.

“We fell in love with the lake last year when we were here and have tried to come back as often as we could. We were here last week on spring break and the fishing was completely different. The water was high and warm. We monitored lake conditions everyday on the internet and were able to make some major adjustments that made the difference for us today,” Kaiser added.

“We caught two four-pound fish right away and thought we were just going to smoke ’em all day long, said Spicer, a sophomore in forestry. “But then the bite died and we struggled for about three hours. We caught our last three with about an hour left in the tournament. We knew it was going to be tough today, this is just awesome!

Rounding out the top five teams and also advancing to the Central Regional Championship are:

College Fishing is free to enter and FLW Outdoors provides boats and drivers for each competing team along with travel allowances. All participants must be registered, full-time undergraduate students at a four-year college or university and members of a fishing club recognized by their college or university.

The next National Guard FLW College Central Division tournament is scheduled for June 19 on the Wolf River Chain of Lakes in Winneconne, Wis.

ABOUT FLW OUTDOORS
FLW Outdoors is the largest fishing tournament organization in the world offering anglers worldwide the opportunity to compete for millions over the course of 191 tournaments in 2011. FLW Outdoors has taken fishing mainstream with the world’s richest fantasy sports game, FLW Fantasy Fishing presented by Straight Talk, where competitors can play for free as well as sign up for Player’s Advantage to gain an edge. For more information about FLW Outdoors and FLW Fantasy Fishing, visit FLWOutdoors.com or FantasyFishing.com.