Another great day on one of my favorite lakes. My son Cole and I decided Sunday to fish Scotts so we headed out Monday morning at 8am to hit the Smallmouth honey hole we love so much.

Standing on the dock getting ready to pick up my son he looks down and says there is a two pounder right at the dock, it turned out to be a good omen. We started fishing right in the marina 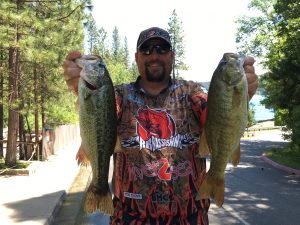 area on the highway 20 side of the lake, about twenty minutes in I looked down and saw a three pound fish sitting on a bed in about eight feet of water. Picking up a couple bed baits and playing with her for about ten minutes showed me that she was right in the middle of spawning and nothing was effecting her. I had been fishing an IMA topwater bait just to see if I could get a reaction bite that late in the day, didn’t happen. After seeing the fish spawning a subsurface bait seemed the right choice, tying on an LBS Tackle swim-bait head and Bass Pro Shops Speed Shad in the Site Fish color was my first choice and it was a good one. Five casts in and a four plus pound smallmouth inhales my bait, confidence started to build. We kept fishing on the north side of the lake for another few minutes then we had to make a quick run back to the dock. While I was handling some business Cole picked up a River2SeaUSA Bling made three casts next to a bush and picked up a nice two pound smallmouth. Jumped back in the boat and off we went to the south side of the lake working every bush in the water. Armed with a Blade and swim-bait we covered water picking up a fish here and there mostly in random areas but the bushes were the main producers. After an hour we made a move towards the quarry, working the same pattern again picking up a few fish here 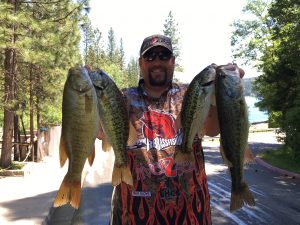 and there. Cole switched to a Drop-shot and immediately picked up two bass and a trout on a RoboWorm Morning Dawn, those were the only three fish caught on this bait.

At this point I was feeling poor so I sat down and let Cole take the front. He was able to pick up a couple more fish on the blade but the bite was slowing down and more people were showing up to take advantage of the beautiful holiday weather. We headed in got our photo’s and headed for home. Hope this helps on your next trip.

See you on the water,