What kind of rivers, lakes and reservoirs are best for smallmouths? Research has repeatedly shown that bass are sight feeders, and they need certain depths, water temperatures, forage and bottom content to thrive. These fish will survive in a fairly wide range of conditions, but there are optimal habitats in which smallmouth are found. An ideal smallmouth lake should be cool. In one experiment, bass from Lake Erie were observed in a laboratory and given a number of temperature choices. Their preferred temperatures for the spring, summer and fall ranged from the mid 60s to the mid 80s. In the winter, they chose cooler water, as low as the mid 50s. In another report, the preferred midsummer temperature proved to be about 83 degrees. Observations made in the field, however, revealed that more bass seemed to reside in the 68 to 70 degree temperature zone. Good smallmouth lakes should be fairly large, clear and deeper than 30 feet. They should also be thermally stratified (where warmer water lies above successively cooler layers of water) so that the bass can segregate themselves from potentially competitive species such as walleyes and northern pike. Some vegetation should be present, but it should be “scanty” as one researcher puts it. A final characteristic of a good smallmouth lake is bottom content. Biologists working with fish in aquariums have discovered that they prefer bottoms with lots of broken up rocks, as opposed to solid, smooth rocks or sand. The same goes for stream bass, which also adapt readily to artificial shelters. A river should have sufficient width (more than 30 feet) and depth (10 feet or better) combined with a good flow of water.

Where and when should we look for big bass? To find big smallmouths, growth rate figures are invaluable. Research accumulated over the years can help narrow down our search tremendously. There are four important clues:

When are bass most active? Smallmouths, unlike their largemouth relatives, tend to be inactive at night, according to one study completed on several Ontario lakes. Shortly after sunset, smallmouths were found to move to deeper water and “rest on the bottom,” where they were approached by divers. During the day, however, smallmouths were difficult to get close to underwater. Scientists say that bass feed opportunistically, as the opportunity resents itself during the daylight hours. Peak activity periods, however, are similar to those of walleyes: at dawn and dusk. Temperature definitely affects bass activity. Water temperatures below 50 degrees put smallmouth into neutral gear. And in years with cool summers, slower growth rates as evidenced in the annuli, or growth rings of the fish’s scales have been discovered.

Which depths do smallmouth bass prefer? According to many studies, bass seem to adapt well to great variations in water depth. The fish were repeatedly observed sunning themselves in quiet, shallow water, but were also radio-tracked as deep as 80 feet in the same or similar water bodies. The reason for such diversity is usually related to forage-base availability. For instance, bass taken out of 55 to 80 foot depths from Cayuga lake in New York had alewives in their stomachs, while most shallow water fish had a higher proportion of crayfish present. Smallmouths are not classified as true schooling fish, but they do aggregate (form loose associations at certain depths for specific periods of time). Schools have been observed in deep water along limestone ridges and other rock bluffs in early September, when surface temperature began to drop. Tag returns from lakes Michigan, Erie, Ontario and Huron indicate very little smallmouth migration, especially when compared with similar studies done on other species. The same hold true for bass on inland waters and for neutral populations in most streams. But hatchery-reared fish definitely moved considerable distances, up to 205 miles, according to an Ohio report. Also, native populations in rivers have been known to abandon their home range when dredging operations were undertaken upstream. On the whole, tagging studies, like radio-tracking studies (which are usually compiled to determine specific fish locations), revealed a wide range of smallmouth movements. But native fish in a relatively stable environment do not move great distances; researchers consider the smallmouth to be a homebody rather than a busybody.

What do smallmouths like to eat? Smallies eat a lot of things, and yeas, research has shown that the fish really key on crayfish when given the opportunity. In six separate studies on a variety of waters nationwide, crayfish comprised more than two-thirds of the fish’s diet. But the studies discovered another smallmouth delicacy: tadpoles. One report revealed that smallmouths prefer tadpoles over more common foods such as bluegills and golden shiners. Another study found tadpoles in the bellies of the fish “out of proportion to their availability”; this indicates that smallies may hunt for tadpole treats. Seasonal changes in smallmouth diet were found to be minimal compared with those of other fish species. The progression of preferred food sources, learned from one experiment conducted on Bull Shoals Lake in Arkansas, was typical: mayflies in the spring, young shad in the summer, and crayfish in the late fall and winter. In the winter, under-ice bass may not feed at all, according to one biologist in an Ontario report. He examined the stomach contents of many fish in mid April and found the belly cavities shrunken and full of mucus, with no digested food particles present.

So, what does science have to do with bass fishing? Plenty. To be sure, there’s lots of food for thought here. But once you digest all the information, you’ll be able to conduct a few field tests close to home with some positive results. 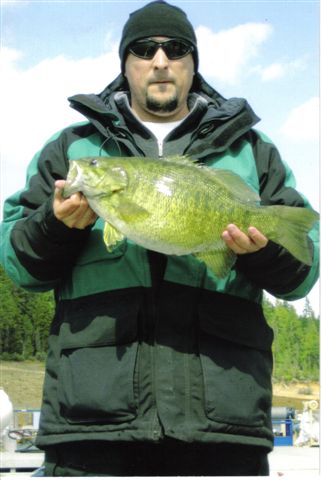