You are here: Home / Bass Fishing Tips / Something Different

Growing up, I can remember my Mom’s typical response to anyone that asked her opinion of how something looked.  If she didn’t like it she would politely respond with “well that’s different.”  This was her way of addressing the individual without revealing her true feelings.

As a non boater we can sometimes find ourselves very uncomfortable throwing something “different” than the Pro or Angler. I was fishing the BASS Western Divisional.  My third day partner told me that we should be able to get a limit first thing in the morning.  He also told me that he and his previous day non-boater had caught their limits in the one area on the same bait. I had been saving the drop shot technique for the third day of competition since the fish were getting hit pretty hard.  The boater even gave me one of his baits and I actually did tie it on.  Then I got to thinking, “they have seen this bait for probably two days now. I need to be throwing something different”.

My thought was that the fish were getting accustomed to bottom bouncing baits, so I was pretty set on throwing a drop shot. I knew that a brush hog was working in other areas of the lake, so I started out with a baby brush hog on a drop shot later switching to a Yamamoto 5” single tail grub on the same rig.  The fish we targeted were only in a about a foot of water so I adjusted my leader to about 5 inches.

Later as the sun came up we started flipping.  My boater was flipping the edges and the little holes in the cane.  My tactic was less stealthy and more direct.  I was using a Paycheck punch rig with a Tru-Tungsten 1 oz flipping weight and crashing through the cane.  Sometimes it would get temporarily hung up, but with a little shaking, the bait would slide right down through the thickest stuff.  Bam!! I don’t know if the reason I was catching fish was so much the color or look of the bait as it was something different.  Those fish were used to seeing a jig fall on the edge of the cover, but this thing crashing down on their head, well that was something “different”. 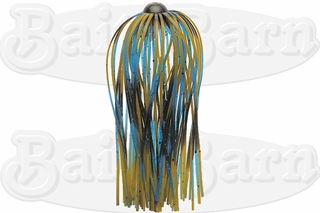 Between the baby brush hog, Yamamoto grub and punching I was able to put a decent 3 day limit in the boat.  It sounds easy, but I can tell you that until I had three fish in the boat I was not confident that throwing something different was the right decision. I ended up being less than a pound short from going to the Nationals and probably would have made it had I switched to the drop shot on the second day of competition.

Sometimes the conditions are such that using the same bait and technique is required or necessary, but I also believe that too many times the non-boater ends up throwing the same bait as the Pro or Angler rather than having the confidence to do something different.  Give the fish something they haven’t seen that day or week and step out of your comfort zone.