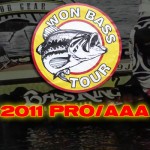 The WON BASS 2011 Pro-Am Schedule has been announced for the 2011 season. We are returning to fishing Saturday and Sunday based on the input we have received from our membership and other western fishermen. We worked with FLW and three of our six tournaments are immediately preceeding their four western tournaments, and one other is two weeks prior.