You are here: Home / Bass Fishing Tips / All about Large Mouth Bass 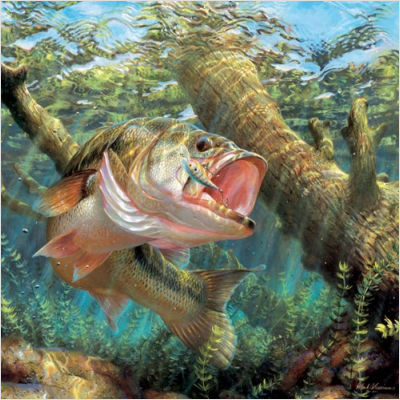 SENSES: Largemouth bass have the five major senses common to most animals: hearing, sight, smell, taste and touch. They have another sense, the lateral line, which is a series of sensitive nerve endings that extends from just behind the gill to the tail on each side of the fish. The lateral line can pick up underwater vibrations as subtle as a swimming baitfish. Largemouth bass hear with external ears located within the skull. They may be attracted by the ticking or popping sound of some artifical lures. But when they hear loud unfamiliar sounds, they usually swim to deeper water or cover. Bass can see in all directions, except directly below or behind. In clear water, they can see 30 feet or more. But in most bass waters, visibility is limited to 5 to 10 feet. Largemouths can also see objects that are above water. Largemouths smell through nostrils, or nares, on the snout. The nares are small passageways through which water is drawn and expelled without entering the throat. Like most fish, bass can detect minute amounts of scent in the water. Bass use their sense of touch to determine whether to reject or swallow an object. Sense of taste is not important to largemouth bass as it is to some fish species, because bass have few taste cells in their mouths.

FEEDING: Newly-hatched largemouths feed heavily on tiny crustaceans and other zooplankton until the bass reach 2 inches in length. Young largemouths eat insects and small fish, including smaller bass. Adult largemouths prey mostly on fish, but crayfish, frogs and insects are important foods in some waters. Wherever they live, bass rank high in the aquatic food chain. A bass 10 inches or longer has few enemies and will eat almost anything it can swallow. Because of its large mouth and flexible stomach, a bass can eat prey nearly half its own length. Bass inhale small foods. The bass opens its mouth quickly to suck in water and the food. It then forces the water out the gills while it either swallows or rejects the object. Bass usually grab large prey, then turn the food to swallow it headfirst. As the water warms, the metabolism of bass increases and they feed more often. Largemouths seldom eat at water temperatures below 50 degrees. From 50 to 60 degrees, feeding increases and from 68 to 80 degrees, they feed heavily. However, at temperatures above 80 degrees, feeding declines.

GROWTH: The amount bass grow in a year depends on the length of their growing season, or the number of days suitable for growth. The growing season in the south may last twice as long as it does in the north. Largemouths gain weight most quickly in water from 75 to 80 degrees. They do not grow in water colder than 50 degrees. Although bass in the south grow and mature faster, they rarely live as long as largemouths in colder, northern lakes. In southern waters, bass occasionally reach 10 years of age; in northern waters, bass may live as long as 15 years. Female bass live longer than males, so they are more apt to reach a trophy size. In one study, 30 percent of the females were 5 years or older, while only 9 percent of the males were 5 years or more.

SPAWNING: In spring, when inshore waters reach about 60 degrees, largemouth bass swim onto spawning grounds in shallow bays, backwaters, channels and other areas protected from prevailing winds. Spawning grounds usually have firm bottoms of sand, gravel, mud or rock. Bass seldom nest on thick layer of silt. Some spawning areas are in open water; others have sparse weeds, boulders or logs. Male bass may spend several days selecting their nest sites. The beds are usually in 1 to 4 feet of water, but may be deeper in clear water. The males seldom nest where they can see other nesting males. For this reason, beds are generally at least 30 feet apart, but may be closer if weeds, boulders, sunken logs or stumps prevent the males from seeing each other. Largemouths spawn when the water reaches 63 to 68 degrees and temperatures remain within this range for several days. Cold fronts may cause water temperatures to drop, which interrupts and delays spawning. A female bass lays from 2000 to 7000 eggs per pound of body weight. She may deposit all of her eggs in one nest or drop them at several different sites before leaving the spawning grounds. After spawning, the female recuperates in deep water, where she does not eat for 2 to 3 weeks. Alone on the nest the male hovers above the eggs, slowly fanning them to keep off the silt and other debris. He does not eat while guarding the eggs, but will attack other fish that swim near the nest. Sunfish often prey on bass eggs or newly hatched fry. In waters with large sunfish populations, the panfish can seriously hamper bass reproduction. Bass eggs hatch in only 2 days at 72 degrees, but take 5 days at 67 degrees. Cold weather following spawning will delay hatching. If the shallows drop to 50 degrees, the fry will not emerge for 13 days. At lower temperatures, the eggs will fail to develop. A severe cold front sometimes causes males to abandon the nest, resulting in a complete loss of eggs or fry. From 2000 to 12,000 eggs hatch from the typical nest. Of these, only 5 to 10 are likely to survive to reach 10 inches in length.