The second installment of the Anglers’ Choice Wappapello Division was held Saturday May, 8th out of Chaonia Landing. Cloudy skies to start the day turned to steady showers later in the morning and lasted most of the day. The lake level was already six feet over summer pool from heavy rains earlier in the week. The consensus of the field was that the bass spawn was coming to an end and the bigger fish had already moved out to deeper water. That fact combined with much more water made fishing a little tougher, and the big bite a lot tougher to come by.

Tom and Colton Jennings won the day by virtue of their five fish limit that weighed an impressive 18.61 pounds and earned them $1805 plus trophies. “We stayed up-river all day and fished creeks off the river,” said Colton Jennings. “We fished flooded bushes with slow moving baits all day and the bite really slowed down after 9:00 this morning. I don’t know if the cold front moving through had them messed up or what it was, but we only had one keeper after 9:00.” 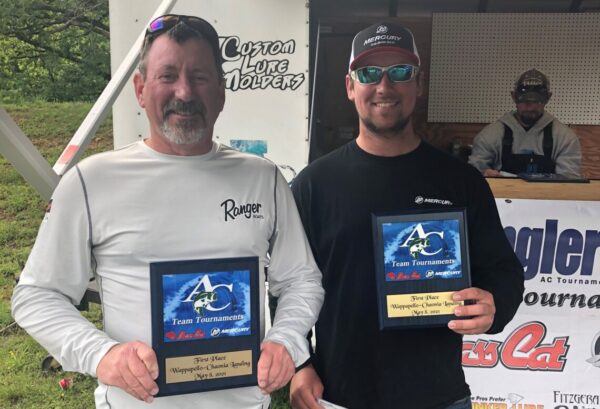 Randy Jackson and Scott Miller took second place with a 15.74-pound limit of fish. It was good for $1175 plus trophies. “We stayed on the dam end of the lake and just fished main lake flooded bushes,” said Jackson. “We were throwing soft plastic creature baits all day.” 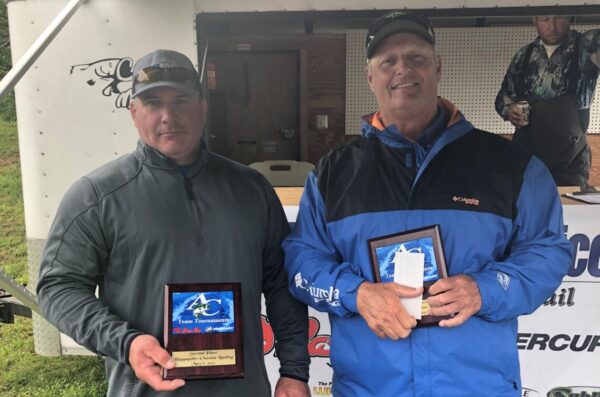 Taking third place honors was jerry Carpenter and Jeff Slinkard. They had 15.13 pounds worth $880 plus trophies. “We stayed around Chaonia Landing area all day,” said Carpenter. “We were pitching soft plastic baits in flooded bushes in the creeks.”

Jake Harris and TC Jennings weighed in a 14.69-pound Fourth Place limit of bass that earned them $600.

Fifth place went to Kevin Brotherton and Clay Henson. They had 14.51 pounds and took home $420.

Randy Pierce and Keith Carroll weighed in 14.24 pounds that was good for $320, and Sixth Place.

Seventh Place went to Wayne Lee and Jimmy Toon. They had 14.12 pounds and took home a total of $235 and an additional $430 plus trophies for the big bass of the event. It weighed 7.05 pounds and was fooled by a football jig pitched into a flooded bush. Their total cash winnings came to $665.