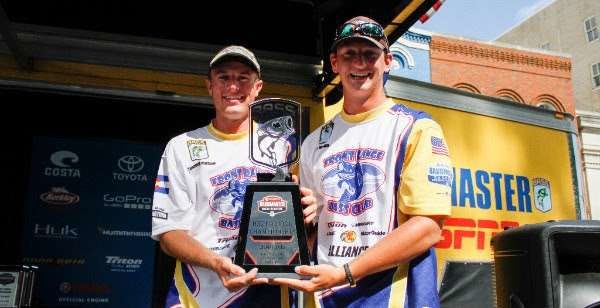 BIRMINGHAM, Ala. — High school anglers on the Western side of the country now have another way to qualify for the 2017 Costa Bassmaster High School National Championship presented by Dick’s Sporting Goods.

On April 29 on Lake Oroville in Oroville, Calif., high school anglers from all the Western States can compete in a one-day tournament, the 2017 Costa Bassmaster High School Western Open presented by Dick’s Sporting Goods, for a chance to compete for the national title.

“We are pleased to offer a Western Open for our high school series,” said Hank Weldon, B.A.S.S. High School manager. “Partnering with the California and Arizona B.A.S.S. Nations has been a very smooth and professional experience. I have no doubt this will be a fantastic event.”

High school anglers from Arizona, California, Colorado, Idaho, Montana, New Mexico, Nevada, Oregon, Utah, Washington and Wyoming are eligible to compete. One two-person team for every 10 teams that participate will be offered a berth in the national championship.

The tournament was previously scheduled to host California clubs, but B.A.S.S. sanctioned it as a High School Western Open as an opportunity to get more high school anglers involved.

“We are proud to get to host this event,” said Mike Landy, California B.A.S.S. Nation youth director and tournament director for this Open. “We are also excited to see what the young anglers catch out on Oroville. It’s a great fishery.”

Lake Oroville made national headlines earlier this year when heavy rains in California threatened to destroy the dam.

Previously scheduled High School Opens are the Central Open in Louisiana that took place in March, the Midwest Open in April in Missouri, and the Southern Open in Tennessee. The Southern Open and the Western Open will take place on the same day, filling the last Open spots in the championship. Other berths are filled by state championships across the country.

“We want to get more of our Western high school anglers involved,” said Weldon, “and I definitely don’t think this will be our last Open out there.”

Takeoffs and weigh-ins will be held at Bidwell Marina in Oroville. The registration deadline is April 15. A tournament briefing will be held April 28 at 6 p.m. at North Valley Tackle in Oroville.

To register, contact Mike Landy, tournament director, at 916-233-7797 or lincolnlandy@yahoo.com.