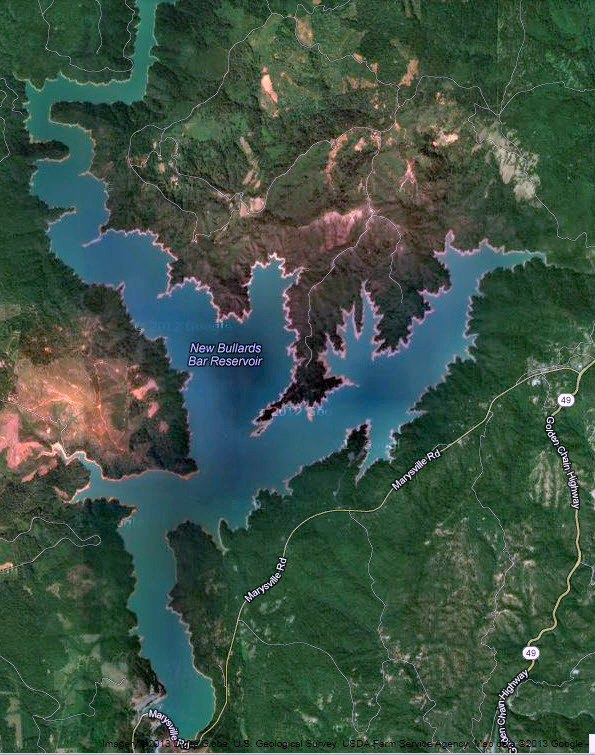 Went up to Bullards Bar to check things out for the upcoming RB Bassfishing media day. Hadn’t been there for 3 years and had never used the Dark Day Campground boat ramp. I was impressed with the ramp, all concrete 2 lanes and the dock is in great shape. Water level shows to be 68% of capacity.

The water temp was in the low 60’s, not a hint of a breeze and a clear blue sky. Great for pictures!

Started motoring around main lake points looking for bait and some arches. They were few and far between. The big Spots on this lake are usually found deep, but I always start out throwing reaction baits hoping for a good bite. I will throw them out over deep water as those Spots will suspend and there’s always a chance of hitting one on the head. Was not going to happen on this morning, so after an hour it was time to pull out the drop shot.

The majority of the fish I saw were in the 45 foot range. They were leary to say the least. The bites were quick snaps at the bait with no connection. I started throwing an old ugly tube on a 1/4 oz jig head and landed the first fish of the day. A very small keeper, but it was a start.

I decided to make a move up river and start working my way back. There were a few small water falls still flowing from the rain we had a few weeks back. Finding concentrations of bait was a real challenge for me. I have only been on the lake a handful of times with some success, but today was a grind.

I started to throw small Yamamoto craw on a 1/4 oz dart head. Finally something they liked. All of the fish I started catching were suspended, there was no sign of a bite, the line just stopped. I caught a number of fish in a short period of time, all were small, skinny rats! Not what Bullards Bar is know for.

Time was running out on me. I switched up to a Senko on a weighted wacky rig. First fish to hit was about a 2, the neat thing is this fish had a belly. As I released it back into the water, it spit up a good sized claw from a crawdad. The next cast was the bite of the day for me. Not a giant, but a 5.55 lb Spot on 6 lb test line is always exciting! I couldn’t have asked for a better end of the day.

Landed the fish with care, then right into the livewell. These fish are tough, but coming from deep water and fighting for what they think is their lives will stress them out. I had her weighed and got a few pics and she was swimming away in less than a minute. I really work hard a protecting the resource and I hope you will too.

Monster Tackle carries all of the tackle I mentioned, they even have an exclusive color of the Yamamoto Senko, and it really is a great bait!

Thanks for reading, be safe and handle your catch carefully as catching sure is the fun part! 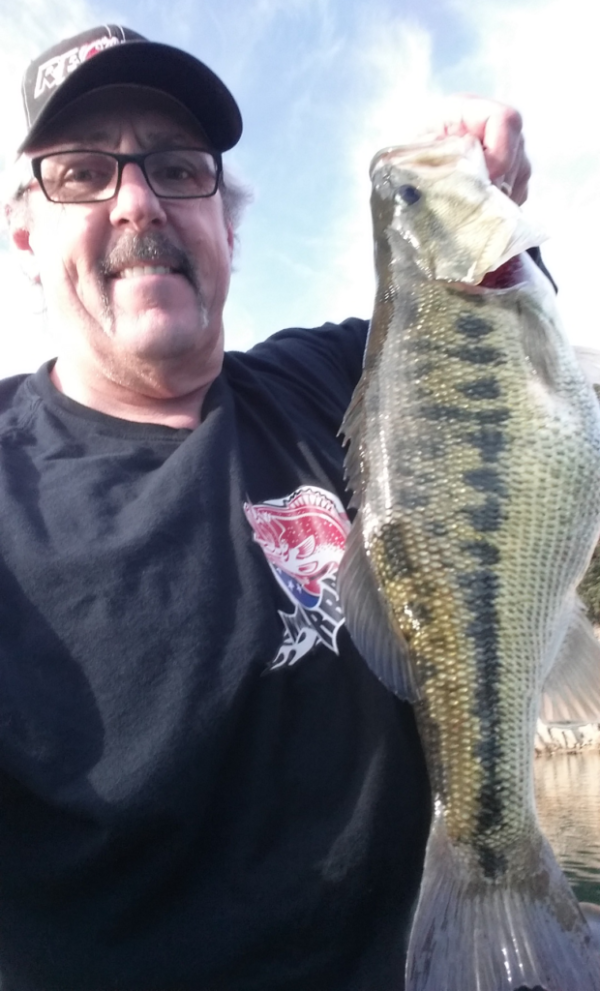