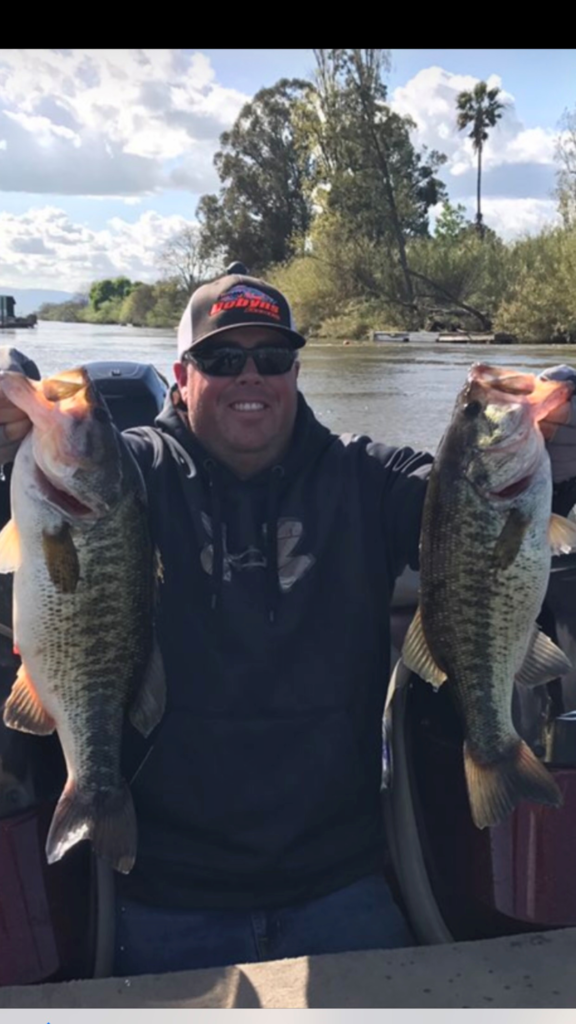 The month of March was starting out to be exceptional for bass fishing on the California delta. Large stringers in the thirty-pound range were rewarding local tournament anglers. Several local tournaments required a minimum of twenty-five pounds to even have an opportunity at a paycheck. Water temperatures were warming nicely into upper fifties and in some areas into the upper sixties. The first wave of pre-spawn buck bass along with a few big females transitioned from their secondary breaks outside their wintering holes on up into the shallows to begin looking for a bedroom.

Florida strain largemouth bass being the predator fish they are become extremely easy to catch when in this state. They don’t share their spawning areas with any other fish and the buck bass will do anything and everything to protect their spawning areas. The big female bass will hang back and wait for the bucks to do their thing, and if I forage such as a crawfish, tule perch, or bluegill presents itself, the big female will take the opportunity and feed. Once the buck bass has made a bed he will wait in that area to be chosen by a female bass. The female bass will choose a bed with a buck bass present and courtship will begin between the two.

Everything was setting up nicely and anglers were reportedly seeing large females on beds in all the flooded ponds. I too partook in some of the pre-spawn activities, catching nice size hens on the Optimum baits Furbit popping frog, and the River2sea Whopper Plopper. Just when everything seemed as if it was going as planned here comes the spring rain storms. A double header set of storms hit the California delta dropping three quarters of an inch of rain in some areas. The overnight low dropped down to the low forties and an artic wind began to blow from the north. Water temperatures plummeted down into the low fifties, and water clarity due to the recent storms was nearly nonexistent. Anglers began to struggle and several tournaments were won with weights ranging from seventeen to twenty-one pounds which is way below average for this time of year.

With the bite being as tuff as it was due to the post frontal conditions, I knew it was going to be a long tedious grind to catch a good bag.  Most anglers I know see this as a hindrance, but I see this an opportunity to go out and learn.

I launched my boat in the central delta and blasted south. My plan was to target dead end slough where there was thick healthy submerged grass such as egeria densa otherwise known as Brazilian pond weed present. More specific to these areas I was also looking for banks that were east facing and adjacent to spawning flats. The reason why I chose to target these areas is simple. With the bass setting up the way they were prior to the recent storms, I knew the bass would be positive feeding fish. The bass that were still transitioning from their wintering patterns would become neutral feeding or in a negative feeding state, which would make the bass extremely difficult to catch. The reason I chose east facing banks, which many of you already know, is because the water warms up faster on those banks due to more sun exposure. I’ve found this is extremely important when you’ve had a recent dramatic drop in water temperature. I’ve found that even a half degree increase in water temperature during post frontal conditions can be the key to getting more bites.

The first bank I pulled up to had scattered grass, rip rap rock, and with the high tide it had a five-foot-wide trough. My bait of choice was a River2sea biggie series crankbait in delta craw color. I made the longest casts I could trying to cover the maximum amount of water targeting the center of the trough. I caught several buck bass within the first thirty minutes of fishing but the largest was maybe two pounds. I knew I was on a good bank because in the past I’ve seen and caught several fish in the six to eight-pound range in that area. I had zero visibility in that area so I was unable to see if there were any spawners present. I hopscotched up the slough to banks which were nearly identical in habitat. I caught a couple smaller bass on my crankbait. The tide continued to fall and my trough dwindled down to nearly nonexistence. I knew in the back of my mind the big ones weren’t on those spawning flats, but I needed to prove it to myself so I could focus on my primary technique which would be flipping.

My jig set up consisted of, 25-pound test Berkley Trilene 100% fluorocarbon. My jig of choice was a TNT Baits Wada Jig, which is a custom hand tied jig designed and manufactured by master guide and delta legend Andy Cuccia. Due to nonexistent water clarity, I chose the larger profile Wada Bomb Jig which was all black in color.

With two rods on the deck negating from any further distractions, I went back to the section of bank where I first started fishing first thing in the morning. The tide was about half way out exposing a more defined grass line. There were also large holes in the grass which were present along with some scattered hyacinth which was in its decomposing state.

I started off by pitching my jig on the edge of the grass line and in the holes in the grass. Both areas were productive and I boated two fish over four pounds in the first fifty yard stretch of bank. The bass struck the bait on the fall which gave me the intuition to speed up my presentation allowing me to cover even more water.

I came to a section of bank where no holes were present in the grass and the grass appeared to be more congregated. I set down my jig rod and picked up my big stick. I began flipping my bait into the grass mats in various distances from the edge. I knew the bass were buried in the grass but it wasn’t clear exactly where. Approximately thirty minutes went by without a bite.

With the tide, almost completely out I started up the big motor and ran down the slough to an area adjacent to a big spawning flat. The area I pulled up on was a classic forty-five-degree angle delta bank which was substantially deeper, however the same well defined grass line was present. I began flipping my one ounce River2sea trash bomb weight into the heart of the matted grass. My rod immediately doubled over. I set the hook and landed a beautiful six-pound bass. I continue down the bank which was set up the same. I preceded to catch several more bass in the four and five-pound class. Bites were steady but lots of water needed to be covered.

All in all, it was a productive day but I never got the big kicker I was after. Catching bass in heavy cover using big heavy duty equipment is one of my favorite ways to catch them. Hopefully this fishing reports helps you catch more fish next time you’re out on the water.