Date: August 15,2017
Location: California Delta
Water temperature: 75-78
Water Clarity: 0-5′
Air temperature: 74-87
Wind: North West 4-12 mph
Tide: incoming
Conditions: Post frontal
On 08/15/17 at 0700 hours, I launched my bass boat at the Tracy Oasis Resort, located at 12450 Grimes Road, Tracy, California, 95304.
After launching I ran North approximately ten minutes to some flooded ponds that typically hold quality fish this time of year. I pulled up to my first spot and failed to raise a fish on a top water frog. I knew the day was going to be a grind because a cold front had just passed through the area the day prior.
The area I was fishing had a rip rap rock walls which had submerged vegetation and scattered tulle berms. In between the vegetation and the rip rap a one foot to three foot trough was present. This trough area was the area I was targeting because it had everything a fish needed to sustain itself.
With only one bass being raised on my frog, I transitioned into flipping. I flipped a 7″ Gary Yamamoto senko, in a green pumpkin red flake color. I picked up my first fish of the morning which was a two pounder. I continued down the bank and missed my second bite of the morning.
I ran out of good water and the tide went slack so I ran North another ten minutes. The wind picked up to ten miles per hour and I started throwing a D&M 1/2 ounce chatter bait. The bait was just what the doctor ordered to get bites, however none of the fish I caught were over two pounds.
I decided to run North even further to try and find an area where there was deeper water. I ran North twenty minutes and fished a section of bank near Mildred Island. What a waist of time that was because the same small fish were eating down there as well.
After fishing Mildred for over an hour catching only rat bass I decided to try something different. The tide was nearly a quarter in and there was lots of water underneath the grass mats. I began punching grass with a 1 1/2 ounce River2sea trash bomb, paycheck baits punch skirt, tipped with a big bite baits yo mama. I found this technique to be unlimited on bites but I was only landing 25% of the fish. The fished seemed to be biting a little weird compared to how they usually do. I believe the cold front had something to do with it.
In search of better quality fish I decided to throw the  infamous drop shot. I ran back South to the same stretch of bank I started, and began fishing the deep water grass flats which ran out towards the middle of the slough. This was the key to catching the better quality fish today. I caught numerous 3 to 3 1/2 pound fish in the deep grass. My target area was 5-12 feet of water.
In the delta I have a very specific set up on my drop shot rig. Stay tuned for my product review video which will be posted to www.RBbassfishing.net. I will get into specific detail about my very unique drop shot rig used specifically for fishing grass.
Any questions regarding this report please feel free to email me at bigbasssniper85@gmail.com. 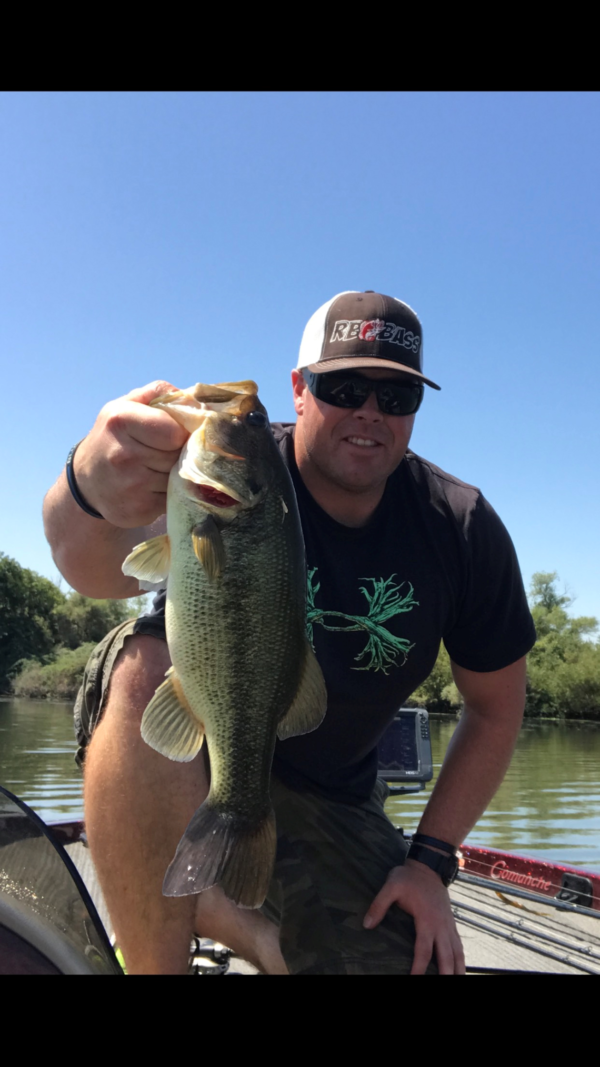