I was able to make a couple trips to Clear Lake in April prior to the Wild West Bass Trail Team Tour. I shined up the Skeeter with some Babes Boat Care to protect the boat from the Clear Lake water and off to the Lake we go.

After a 2-1/2 hour drive I arrived at the Nice-Lucerne ramp. I was greeted by a Quagga Muscle inspector. He was a super friendly guy we chatted about 20 minutes about how good my Skeeter Looked , he was shocked the boat was a 2001,. I simply told him to try Babes!!  and

It was a cool morning and very calm at the ramp, I was excited to get back on the water, I had 3 days to fish and see alot of Clear Lake. 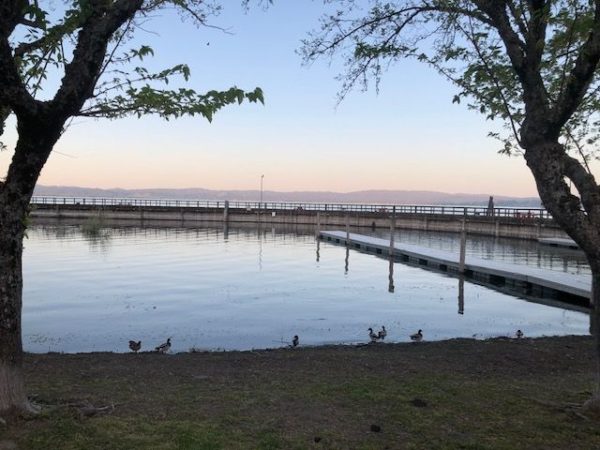 Day 1 I launched in the North and stayed there all day. I started near State Park and made my way north as the day went on. My first spot was the mouth of a creek, and it was for 2 other boats as well. I stayed back and watched the Bass blowing up shad and hitch. A 7 ” Hitch floated up to the boat. I had began throwing a IMA Vibe, but the bottom was full of moss, I quickly changed to a TTI Blakemore Fish Head Spin, and again still getting alot of moss on my bait. I picked up the IMA Glide Fluke as it matched the Hitch size perfectly! My first cast boom i get bit! Well I threw it 150 times with no other takers. At this point the sun had come up and I went right to the bank to see what things looked like. And right away I see Post Spawn cruisers and empty beds. The quick warm up pushed these fish right to the bank to spawn. Knowing  fish spawn in stages I picked up and went looking in the State Park Tules. I covered a few hundred yards with no bites and seen no Spawning activity. Thought this was odd, but remembering my past fish move up in packs then spread out during the Spawn. I kept moving down the bank and Boom a see a 5 lber and a 3Lber but they were very freaky and skittish. They’ve been pressured for sure. I  took a good look at exactly what the Tules and terrain looked like. These tules were clean no moss and lead to a quick break to a spawning flat.

I again picked up and moved further North just past Kelsey Creek. I pulled into a bay and looked for clean Sparse Tules. First cast with a Berkley Maxscent General Boom 4lber. I was like “Cool” im on the board! its been a slow start! 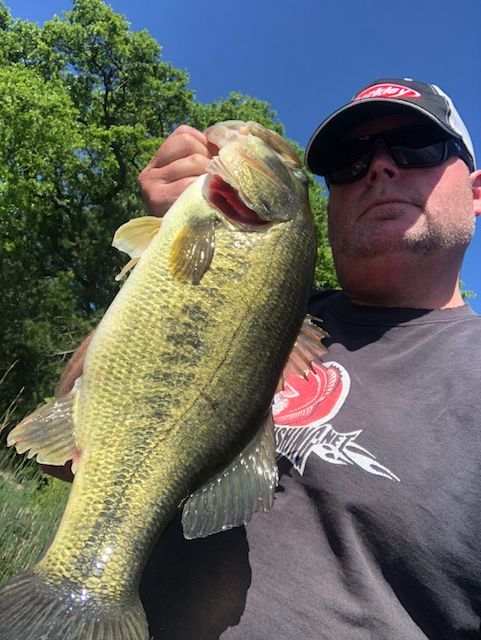 I looked at the exact point I got the bite, pitched into a new area and again Boom! A 2lb Buck. Now Im putting it together. I began picking apart the Tules and Pockets and I was tearing it up! But nothing over 4lbs and most fish in the 3lb range. I was ok with this Im on vacation and its alot better than last Fall on the lake! I found plenty of healthy weeds and Milfoil. They didnt kill it all!

I again picked up and continued north to the next bay, Starting near the points and working my way back. Now I started to see the bed fish again and fish roaming everywhere, I put my boat in 5 ft of water pitching out to the outer edges. While i did this I looked for beds in 3-6ft of water. The fish were bedding deeper in very small holes. I was catching them pretty good while looking, but like earlier these bedding fish were very skittish and not in the mood to be messed with. I continued to cover water and key in on the clean tules, you had to pay close attension as every 40yars or so would be the right stuff! I found a spot loaded up and milked it for some time, it had pre spawners, spawners and post spawners. No big ones but boy I had a blast! I did find 1 big one and got her to snap 3 times, but never stuck her. 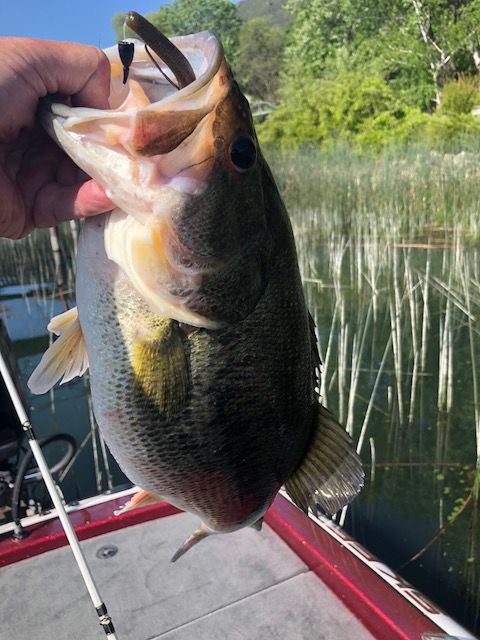 I kept this pattern up all day until I got to lake port, it was amazing to see how many fish had moved shallow! Giant Crappie, Blue Gill, Shell Crackers, Shad, Silver Sides, Bass, Carp even catfish and Hitch were everywhere! It was like a Aquarium!  Still stuck a few solid ones to finish off the day! 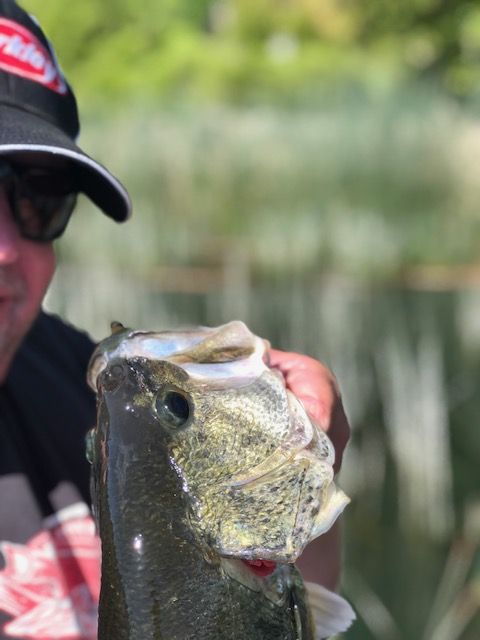 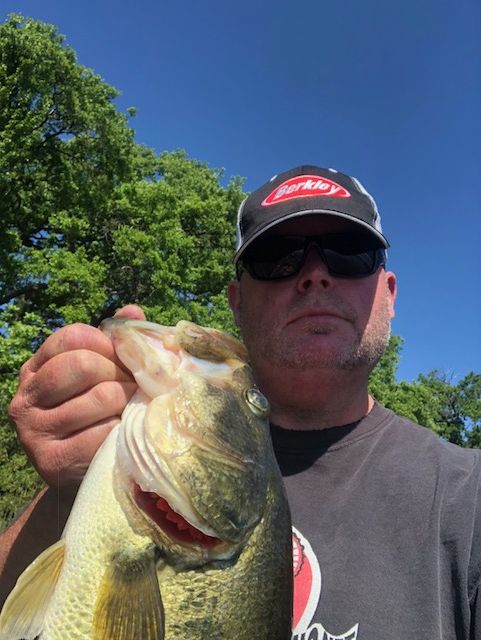 Well day one was amazing, the weather was near 80 and burned me up, it was time to go to my Lil buddie Boby Tylers House for some chow!

Day 2 I went to Red Bud Launch ramp, spent a few bucks with the local Tackle shop with Jimmy and off to find new water, My West event was 1-1/2 weeks away so I was trying to get familiar with the tules and the terrain I might be fishing.  Now in the south I saw alot less fish , but I was seeing some good ones! I found a 5lber on bed and she was staying, I sat on her for 15-20min blind pitching in the bed Texas rigged with the General, and Tick!! BOOM stuck her! A stud chunk Clear Lake Bass weighed 5.3 no giant but already Bigger than day 1. 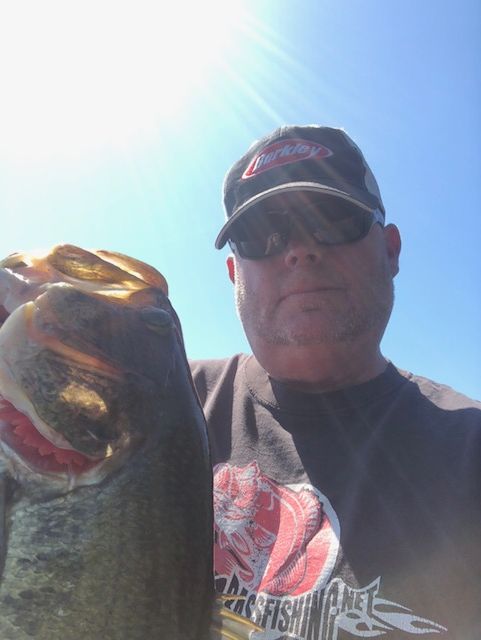 I had the tules dialed in, and started finding bed fish in 5-6ft of water, My Next fish went 5.3lbs then I caught alot of 2 lbers, seems the South had Big Ones or little ones, the North had better overall

Quality in the 3-4lb range.

I started bouncing around and checking areas with the right Tules and Docks, in the past the Bass use the Docks as highways to the Spawning Flats. I saw fish busting Shad and the Male Bass were swimming out to the boat to say Hello!

Finally I see a 10 plus swim away to a Dock, I hadnt seen much over 5 lbs in 2 days, Then I looked into the Tules and a Big one was in there deep. 6-8 ft bed. I spent a Hour on her, she made a few pecks at my bait so I knew she would go. Finally Tick! and of Course I laid the BOOM on her! She’s a Big-un! After a quick fight, I got her in the boat, turns out to be a 9.7lber. And she had laid most of her eggs. Would have been a 10 plus for sure. I nice Big Clear Lake Bass! 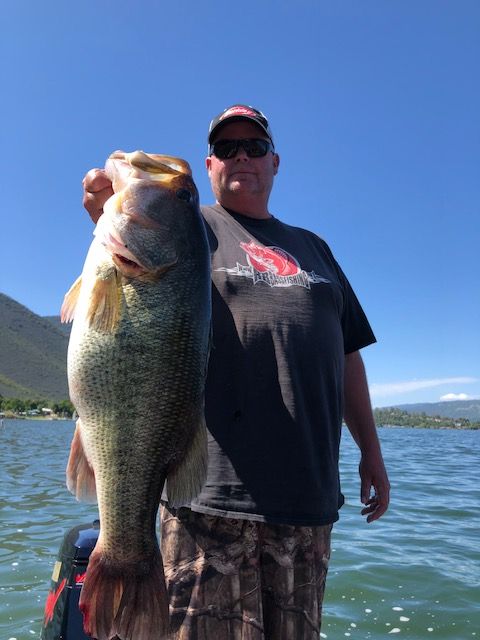 That about wrapped up my practice as I took the next day off the water to get y boat ready for Wild West Bass Trail.

Me and my Partner Steve Wilson ended up 26th of 165 teams, not what we had hoped for we weighed 7 fish for 21.83 a sack of clones. We never saw a Big Bass nor do we loose any Big Bites. I bounced around to 15-20 areas, but just didnt make the right choices. None the less we moved up in the points to the top 5 for AOY. Now time to prepair for the Delta! 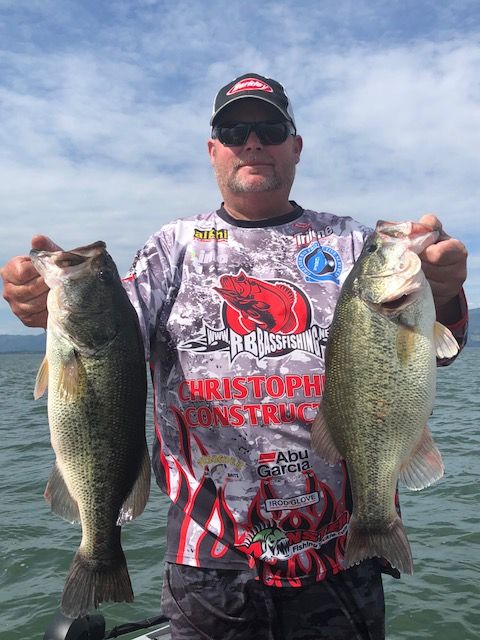 Clear Lake is Alive and well!

See ya on the Water Ron Howe!