Date: May 27th 2017
Location: California Delta
Water temperature: 67-75
Water clarity: 2-5 foot visibility
Tide: outgoing
Air temperature: 68-84
Weather conditions: overcast skys, sunshine
Wind: 0-5 mph north/west
Moon phase: 🌒Waxing crescent
On May 27th 2017 my buddy Justin Misenhimer and I launched out of Sugar Barge RV Resort & Marina located at; 1440 Sugar Barge road, Bethel Island, California 94511.
We launched the boat and started fishing Franks Tract to try and get an indication of fish activity. We both were throwing moving baits to cover as much water as possible. Justin was throwing a River2sea Rover and I was chucking and winding the brand new River2sea Whopper Plopper 110 in the bluegill pattern. If you haven’t yet purchased a Whopper Plopper 110 you’ve made a mistake. This Whopper Plopper produces a unique sound different from the traditional Whopper Ploppers.
We fished approximately twenty to thirty minutes without a bite so we bounced to the other end of Franks Tract to try our luck there. Second cast Justin hooked up on a healthy three pound large mouth. I too caught a nice three pounder near the outer edge of a sparse tule flat we were fishing. We fished down the bank another fifty yards and we had several fish attack our baits but they didn’t eat it. We were about two hours into the outgoing tide so we decided to run south to stay with the higher water.
We pulled up into Mildred Island and I picked up my frog rod. My rod of choice is a Dobyns Champion Series 736 frog rod. I have this rod paired with an Abu Garcia Revo Rocket spooled with 65 pound Sufix 832 braided line. My frog of choice in early spring is the River2sea bully wa 2 in the Little Allen pattern or the Bluegill pattern. The reason I choose these two frogs this time of year is fairly simple. You have to “MATCH THE HATCH.” Bluegill are spawning all over the place, and the California Delta bull frogs are more active and plentiful in and around all the flooded ponds.
We started out working the east of the island. Immediately we had a double hook up on two bass in the three pound class. With the high water we noticed there was a lot of areas behind the tules that looked promising. When I first pull up to a new area I have never fished, or have not fished in a substantial amount of time, I always start in the deepest pockets and work my way out. I do this to figure out exactly how the bass are positioning themselves in that specific area I am fishing. What this allows me to do is eliminate water allowing me to cover more water and save time. This is paramount when pre-fishing for a tournament.
As we continued to fish down the bank we realized every fish we caught was in the three pound class. We continued to catch several more fish all right around three pounds. We exited Mildred Island and started fishing some mats that were on the main river. Right away we found the better quality fish. It seemed like if you could find a pocket in the mat on the front side of a tule berm, or the back side of a tule berm, there was a quality fish willing to eat your frog. I casted my frog in a large pocket at the base of a large tule berm. I twitched my frog twice and the water exploded around my frog. I saw a flash of a nice largemouth bass digging towards the base of the mat. I set the hook and winched in a beautiful six pound largemouth bass. I continued this productivity with several more bass in the 4-5 pound range. 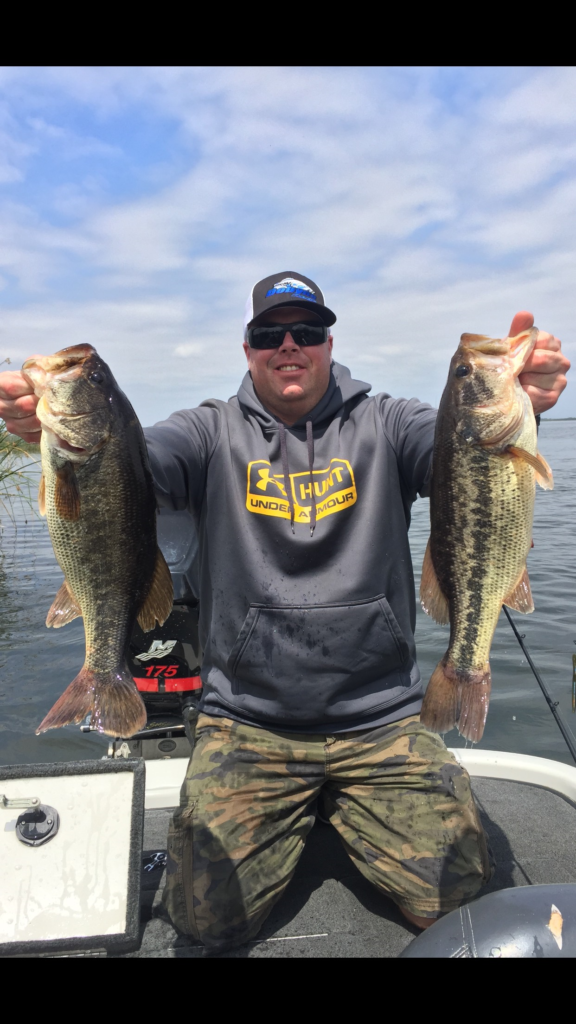 Over all this was an excellent day fishing, even though we never caught the kicker fish we were after. Anytime you can throw frogs all day long it’s a good day in my book. Hopefully this fishing report provides some information that will help you next time your out on the water.