Delta 5-13-2017
Launched at B&W. It felt like an early March morning rather than! I started fishing on a weedy flat not far from the ramp. The tide was just starting to go out. I started in the same spot the week prior on the low. What a difference a week and a cold snap can make. Water temp was 57° and the water had really gotten dirty. The crank bite I had the previous week was gone. I did flip one about 3lbs. off a weed patch under a bush. I worked a mile or so of bank with no luck. The 7 degree drop in water temperature and lack of clarity told me it was time to move.
I started flipping some weeds on a 90° turn on the Old River. I was using 1/2 oz gambler screw in rattling weight, a red Gamakatsu #5 EWG offset hook, with green pumpkin/red Zoom Brush Hog. I was fishing some slack water just inside the current. I had a number of bites, but nothing to show for it! I threw in my drop shot with a 6″ Rob Worm in the MMIII color. To my surprise, not a bite. I downsized to the same color worm in 4″ model with the same results! Time to move…
Ran over to the outside of Mildred Island. It was about 11am at this point, I was still it my sweatshirt, the wind was blowing about 10mph, nothing extreme, it was just cold! I started flipping the weeds with a 1oz weight and sprayed grass beaver. The water was in the 65° range over there with 2′ visibility. On my first drop with the beaver in about 5′ of water in the milfoil, I got my first good bite. How do I know, well I never felt a thing, I wasn’t 100% focused on my bait that had moved a few feet from where it started, my brain finally reacted with a swing an a miss! This is why practice and I’m glad that is what I was doing. I continued throwing a number of baits, in different forms of cover for the next couple hours. I managed another one about 3 on the Brush Hog. The tide was about bottomed out. This cold weather really had the fish in a funk. I wasn’t feeling to confident at this point, then I hear it. The sound we are hearing way too much on the Delta nowadays, a seal in the middle of the slough. I had a weed flat between myself and it. It was swimming parallel to the bank out in the middle. Going underwater a few seconds and then coming up for air. I thought it would just keep moving in that direction. It went under again, it made a 90° turn right toward me, came through the weeds and surfaced about 30′ in front of me. This guy was at least 8′ long! I yelled as loud as I could to GET! Very surprised, it worked. I scared it, as much as it scared me! It dove under going away from me and I never saw it surface, nor did I see again!
Ate a little snack and thought about where to go, what to try next? I have learned to sometimes do what you don’t think will work. So out came the frog. I threw it for about a half hour until I got a little swipe at it. Had to be a small fish? Went a little bit further and my first frog fish of the year. The bite was subtle as far a frog bites go, but it ate it! Good old Bobby’s perfect frog. The Swallows are flying all around right now, and I think the fish know it. For the next half hour I managed 4 fish out of 6 subtle blow ups to save my day. Nothing huge, but it sure is fun!
All gear mentioned is available at Monsterfishingtackle.com 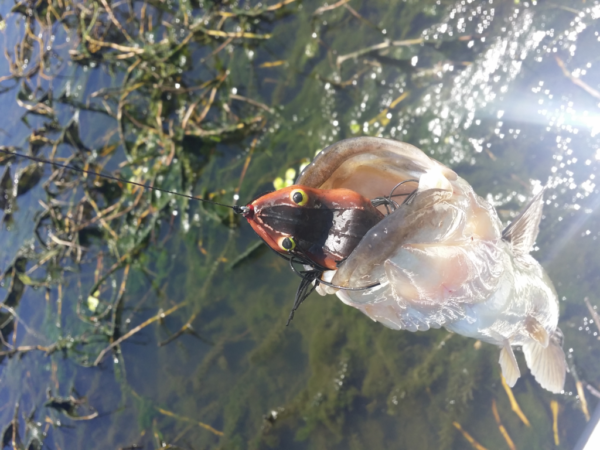