Well after two consecutive days of fishing on the Delta I still have no clue. Friday the 21st was a bit chilly and breezy  with predicted highs around 78 degrees. It took a while but about 1pm it really warmed up. The bite was on, fish were moving shallow and eating. I caught them punching, frogs, flipping beaver style baits and chatter baits. The chatter fish were on rock walls with wind blowing into them. When they hit it there was no doubt. The frog fish were very aggressive and quick. Throwing the frog in the troughs produced quick bites for fish from 2 to 4 lbs. The punch fish were a little more fickle but the quality was much better with fish to 8 lbs for me on Friday. Flipping beaver baits into tule pockets in protected areas is an old standby and also produced fish to 8 lbs for me on Friday. I fished south to middle Delta and just bounced around trying to find some areas with numbers of fish. Water temps started out at 60 deg and got up to 67 in some protected areas by afternoon .

I headed home to prepare for our tournament the next morning. I arrived at Russo’s and launched the boat. Much to my surprise the water was almost 64 deg at launch time. Wow it really warmed up. I thought the bite was gonna be on. But way, mother nature had other ideas. Another front was coming through and it seemed to really push the fish back. We fished 4 hours trying what I had found on Friday to the tune of one keeper fish. We decided to run back to Franks and fish the tules on the incoming tide. We caught about 12 fish in the closing hours of the tournament and culled a few time by pitching a beaver bait in watermelon red to tule pockets. We had to keep the bait sitting in place to get bit. We ended up with 13.4 lbs or there about. Good enough for mid pack, and not what we were hoping for but a salvage none the less. Some of the guys caught them really well and it just goes to show that some one or somewhere there is a bite to be had. Congrats to Mike Birch and Lori on a great adjustment and getting the win. 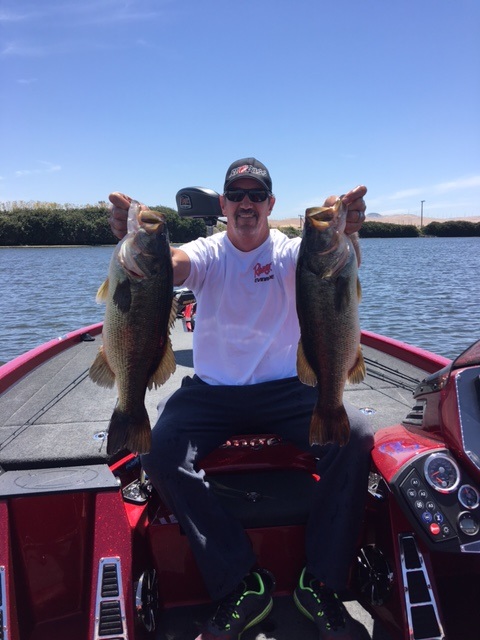 Remember its spring and the fish change quickly. Sure they want to spawn but sometimes the weather, specially this year, has other plans. Keep looking and trying different approaches until you figure something out.
Clear Lake is next and I really look forward to those hard fighting monsters.
Fish On and Tight Lines.
Sean Wayman