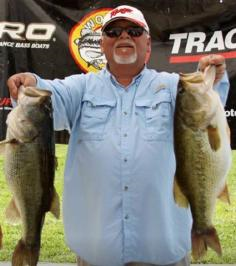 I recently had the opportunity to talk to one of Northern California’s Bass Fishing Legends, Dink Mendez. Dink is from the San Jose Area and started fishing with his father when he was 5 years old. He was introduced to Bass fishing when he was about 13 years old.  Dink was heavily involved in Motocross racing and had a passion for racing. At the age of 30 life started to change for Dink and Motocross racing was beginning to slow down. Around this time a buddy got him involved in a local Bass Club. Dink said it didn’t take long to be “Hooked”.

Dink found himself buying everything he could think of as this new passion seemed to be taking him over.  Dink was getting all the gear, rods, tackle and even a boat. Dink told me he remembers his very first boat, a 1977 Monark Aluminum boat.

Dink said he started fishing a lot, taking every advantage he could to get better.  Dink told me he has a competitive side in him that has always given him the ambition to be the best he can be in whatever he sets out to do.  He told me that’s why he thinks he has been able to keep that drive, want, and excitement of the catch after all these years.

Dink has several wins over his long Bass Fishing career. Dink has won on the BFL, West Coast series, Won Bass. I asked Dink what was one of his best memories. During the pause, I could hear the wheels spinning and could tell Dink was thinking through a barrel filled of great bass fishing memories. Dink said one of his best and memorable memories would have to be his BFL win on Lake Shasta in 1982.

Dink is still very active fishing and fishing tournaments. Dink said he fished 25 years on the front of the boat and is now enjoying his time as a Co-angler. Dink said he’s having the time of his life on the back of the boat, “All I have to do is show up and fish, what’s better than that”. I asked Dink what’s one of the biggest benefits of being a Co-Angler. Dink said fishing with all the different Pro’s. He said it’s great when the Pro’s ask him questions and feels he can still offer great information. He also said it’s great because he’s still learning from others as well. Dink told me it’s different in these tournaments from what it used to be. Dink said “back in the day”, anglers all competed one on one and no one shared information. He said the way these tournaments are set up you are partnered up with someone different every day and it benefits each angler to talk and share. Dink said for example, I recently fished a Wild West Bass Trails Pro Am, and one of my Pro’s was Michael Coleman. He said he and Michael hit it off and he enjoyed a great day of fishing with a new partner. Dink said after all these years he’s still learning and enjoying fishing and said it’s because of guys like Michael.

I asked Dink what advice he would give for a young angler starting off like myself. Dink asked, well how old are you? I replied 15. Dink said oh! I think one of the main things for young anglers getting into team fishing is to make sure they have the right partner. He said it’s extremely important to be on the same page. “You need to learn to feed off each other and have a lot of support for each other”. Dink said often you will find yourself or your partner having “one of those days”. One is catching and the other is off. Dink said as a team you need to understand that it’s going to happen and just be happy one of you are on them, and it’s ok to be the “net man once in a while”.

As we were wrapping up our conversation I asked Dink what his current fishing plans are. Dink chuckled and said, “Well I’m currently sitting on the back deck of my house on Clear Lake looking out at spots I have caught on fish for years”. Dink said he’s preparing for the Wild West Bass Trials Pro-Am TOC tournament held in a few days on Clear Lake.

At 72, Dink Mendez gets as excited for bass fishing as he did when he was 5 years old. He still has that passion and drive for this sport and has no plans on slowing down. Dink told me he will fish until he physically can’t. It was an honor to talk to Dink and I all appreciate him taking the time to share some of his story. Good Luck this upcoming weekend Dink Mendez.