April 2018 on Lake Berryessa
If catching 30, 40, even 50 fish a day is your idea of fun, then Berryessa (aka Berry)
is right for you … right now.
Conveniently located, Berry is a little over an hour from either the Bay Area or
Sacramento.
LAUNCH CLOSE
You can launch near the dam at Markley Cove, in the narrows at Pleasure Cove, in the
main lake at Spanish Flats, up north near the incoming creek at Putah Creek, or down south
at Cappell Cove near the lower west end of the lake. Ramp fees are about $16, unless you go
to Cappell Cove which is free.
THE SPAWN
Currently the fish are in all three phases of spawning and can be caught with a
plethora of techniques.
Spawning bass can be found in the coves, on flats, and around shallow areas behind
the islands – pretty much all over the lake. All three species are up right now. However, I
prefer catching smallmouth simply because it’s fun and easy.
Often, if there’s not much wind, you can see dark circles in about five feet of water
where the smallies make their beds. Cast a drop shot rig ahead of the circle and drag it back
onto the bed – once there shake it a bit – hopefully catching the fish. If not, move on to the
next one. It can be relatively simple to locate a lot of beds this time of year; you’re not
looking for fish, only the beds. If you pull up on a bed and can see a fish, most likely that fish
has already seen you, making it much more difficult to catch.
Additionally, search shallow flat areas or the extreme ends of coves and pockets for
largemouth. You might just run across a giant 8- to 12-pound bass.
Remember to let these fish go as soon as possible so they can go about their
business of making babies. If immediately released in the vicinity, most bedding bass will
return right away to their beds, seemingly unfazed by the entire ordeal.
PRE- AND POST-SPAWN
Pre- and post-spawn bass can be found in the same areas, which are often just
beyond the spawning areas. Visualize where the fish are going and picture a route from the
main lake to the shallows and all the stopping points along the way.
You almost can’t go wrong fishing points, but all points are not equal. Points leading
into a spawning area are better than just a point. Moreover, points in spawning areas such
as a creek channel can be good. You will need to try different points to see what’s best for
that day. Islands, submerged islands, points on islands, flats with a drop off, laydowns or off
shore rock piles can all be good this time of year.
FISHING
Berryessa is one of those lakes on which you can fish almost any way you like. If
there’s a little wind or weather, reaction baits work well. Choose a 1/2-ounce Revenge Deep
Runner spinnerbait in white and chartreuse or Silverside (gold and silver double willow),
DUO M65 11A crankbait in Morning Dawn or Indigo Halo, or River2Sea S-Waver in Light
Trout. There’s also a group of guys who toss big swimbaits and do well, but that’s not my
gig.
On an average day when I’m guiding anglers who are not well-versed in bass fishing
– or even those who are – we throw finesse baits.
FINESSE TECHNIQUES
Wacky-rigged Senko’s have been really good. The 5-inch versions in Baby Bass,
Green Pumpkin, or Cinnamon, rigged with a #1 Gamakatsu drop shot hook, produce well.
You also can’t go wrong fishing a drop shot. Use a 3/16-ounce barrel weight, the
same #1 Gamakatsu drop-shot hook, and a Yamamoto Shad Shape worm in Baby Bass,
Cinnamon or Green/Purple Flake. MM3, Aaron’s Magic, and Morning Dawn Robo Worms
work well, too. If you want to target laydowns, I’d recommend a #1 Gamakatsu extra wide
gap hook, making sure to rig the drop shot Texas-style, otherwise you’ll be retying all day.
When casting either medium-sized or small swimbaits, I’ll use a 1/8- or 1/16-ounce
ball head jig with a 2.8” Keitech in Pro Blue Pearl, Rainbow Trout or a Shad colors. You’ll
want to use Super Glue to hold the Keitech on to the head, otherwise you will go through a
bunch of baits.
Somedays the fish only want a Wacky Senko, whereas other days it’s only the drop
shot or swimbait they’ll eat. Either way, experiment with all three and see what’s working
best that day.
Indeed, there are many other techniques that work: Darter Heads, Neko and Ned
Rigs, and Spider Grubs all produce. But currently a wacky-rigged Senko, drop shot, and
swimbait are producing consistently.
HERO OR ZERO
We smashed ‘em yesterday, so I called my friend and said let’s go. It’s on fire. We
show up at the lake, start fishing with the same S-Waver and Revenge spinnerbait for three
hours, and get zero bites. What the *@#! is going on?!
Well, yesterday there was a little weather. Six mph winds and cloud cover whereas
today is clear, sunny, and calm. Yesterday the fish had moved up and were biting
everywhere. Everyone on the lake was ready to go on tour. Today, not so much.
What now? The fish are still there, but they’re obviously not biting. This happens all
the time. Instead of staying with what’s not working, I go to my finesse tactics and start
hitting points leading into coves, points in coves, channel swings with deep water, and
​
laydowns. Hit these high percentage places and it will save your day. You might not catch
giants, but you’ll catch fish.
About Mark
Mark Lassagne, born and raised in California, is the creator of the popular quarterly
publication BASS ANGLER Magazine. Mark is also a professional tournament angler and
guide. To book a trip or find out more about Mark, go to www.marklassagne.com.
Mark with a nice spot caught on a Revenge spinnerbait 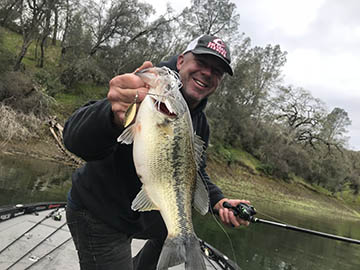 Poem from 8yr old Graham after a guide trip in April 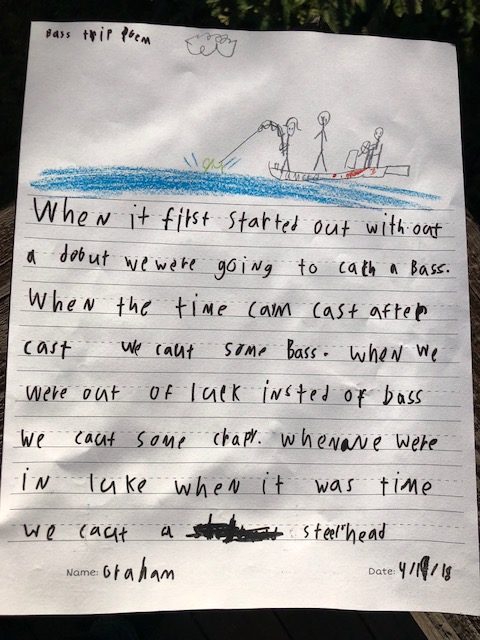 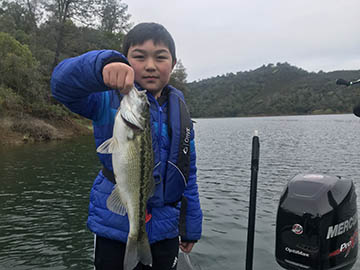 Graham caught a nice steelhead and a crappie for dinner 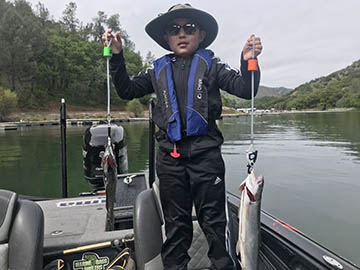