Took a trip out to Lake Berryessa on Monday with my friend Matt Tozer. We Launched out of Markley Cove at about 6:30 a.m. Our first stop was to the Big Island on the main Lake. We started to fish the back side of the island. I was throwing a Evolution Baits Grassburner and a IMA skimmer, hoping to get some topwater action before the sun came up all the way. Matt was finesse fishing with a Ned rig in deeper water behind the boat. We Spent about 30 minutes fishing the back side of the island without any luck. I decided to run across to the East Bank of the main body and fished one of my favorite coves that was still holding some shade on the South Bank . Still throwing the Grassburner,  I approached a area that had about 100 ft of rip-rap along the bank and on my fourth cast Boom! I ended up Landing a 5 lb + Largemouth. She exploded on the bait and fully breached the water during the strike. It was so awesome to watch!. She gave me a good fight for about a minute or two and I swung her in the boat.. 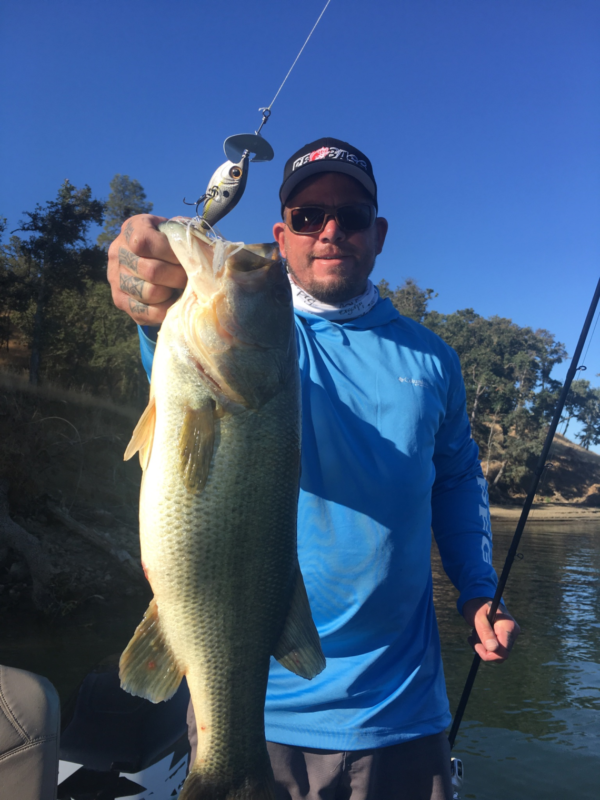 once the sun came up we ended up fishing some random Banks right outside the opening of the Narrows and around skiers cove,  We were targeting and marking fish in about 20 feet of water. Matt ended up catching a nice spotted bass 3LB+ on a Ned rig.. 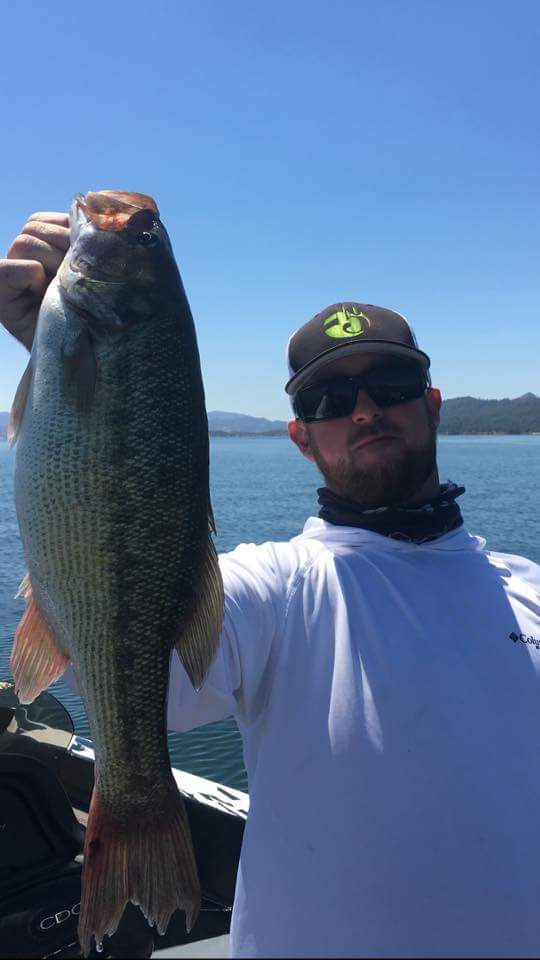 I switched over to a drop shot and had a few small bites. But no real action. at this point the pleasure boaters and Jet skiers started to come out. So we took a run to the big bridge. Approaching the bridge we noticed that there was already 4 boats fishing, one one each piling. So we fished a few points that were close. Matt ended up catching a small fish on the ned rig. Once the boats left the bridge we tried giving it a shot. I pulled out my drop shot and was suspending it in about 20 to 30 ft. The bridge pilings were in about 90 ft of water. I lost a good one and ended up catching a fat sunfish. Matt was throwing a big swim bait but no takers.  There was fry and bait everywhere but we just couldn’t get the bass to bite. The wind started to pick up so we thought we might have a better chance running to the Narrows searching for some coves with some shade on them and try to get some protection from the wind. Unfortunately the wind was about 10 times worse in the Narrows than it was on the main Lake. It was weird,  the pleasure Boats were out of control at this point. The water was so dirty and turned up due to all of all the boat traffic. So we called it a day and went back to the ramp. All in all in was a ok day considering the amount of boaters and Jet skiers for the holiday. Next time I will make sure to get there a few hours earlier and hope to get more of a topwater bite.