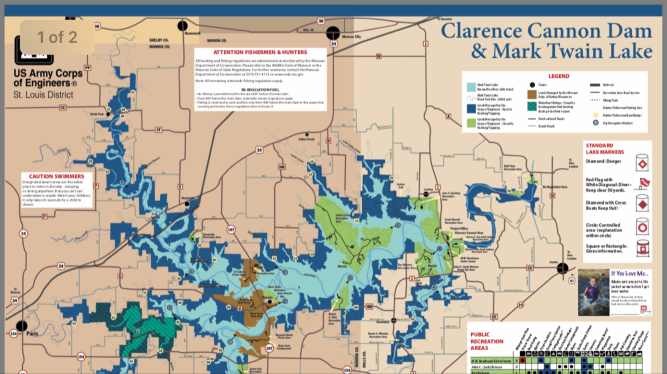 Date: April 11 – 14th
Location: Mark Twain Lake, Perry, Missouri
Air Temp: 28° – 65°
Water Temp 44° – 48°
Seasonal Fish Pattern – Pre spawn
One of the first things I noticed after moving from California to Missouri is the popularity of Crappie Fishing. When my Bass Tournament partner David Ladyman invited me to join him on a crappie fishing trip I jumped at the chance to see why this little fish is so popular. We met with Ben Henson and Brandon Sullivan and started our drive north to Mark Twain Lake.
Mark Twain Lake is a 18,600 acre impoundment located a few hours north of St Louis, Missouri. As the lake filled many areas were left with trees still standing, this standing timber is where were going to be looking for Crappie.
Discussing a game plan on the drive up there, David said sometimes it might take awhile to find the right depth and color jig that the fish were looking for. However he had a plan to shorten our learning curve, he placed a call to a buddy of his who lives in the area. Kenny Wilkinson not only lives in the area but is the owner/operator of Wilkee’s Guide Service, he’s one of the top crappie guides in Missouri and competes all over the Midwest in Crappie Tournaments. Kenny suggested we start our day past the dam in an area known as dry creek and the fish were between 10 and 12 feet deep next to the timber.
With a game plan in place David and I followed Kenny’s advise and ran to Dry Creek while Brandon and Ben scouted out an area known as Pigeons Roost Creek. With no wind and temperatures in the 60’s it was perfect for fishing the light crappie Jigs. We found the fish right where we we were told they would be, in 11’ of water next to standing timber. The technique we used was to simply drop the Jigs over the side of the boat and slowly maneuver between the trees. The crappie fisherman call it trolling, but your Baits are out the side and not behind the boat, we moved around real slow as to keep the lines straight down, trying to keep at about .3 MPH according to the GPS.
In a little over 2 hours we both had a limit (15 fish over 9”).
After the long drive up to the lake we hadn’t got on the water till 11:00am, so with limits in the boat and already early afternoon we decided to go check into our motel. The Junction Inn, just outside of Perry, Missouri is setup with the fisherman in mind, the motel has ample parking with outside outlets for charging batteries, a fish cleaning station with running water, there’s a restaurant/bar, a gas station with a mini mart and a tackle/bait shop all in the same parking lot.
It wasn’t very long until Ben and Brandon showed up with their boat also having a limit of crappie, we compared notes on the days fishing, and got down to cleaning the days catch of 4 limits of Mark Twain Crappie, followed by dinner at the adjacent restaurant. After dinner while standing around the boats rigging up rods and having a cold beverage Kenny (Wilkee’s Guide Service) pulled up to see how we had done, and talk about what we might expect for the following day… a major cold front and high winds…… 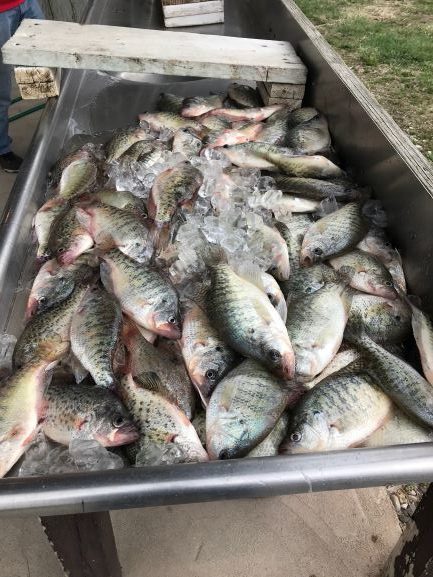 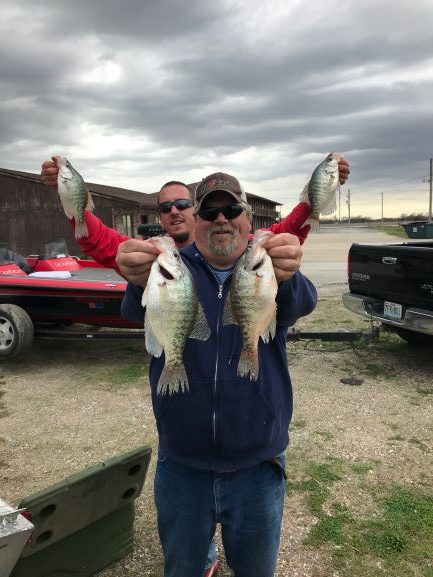 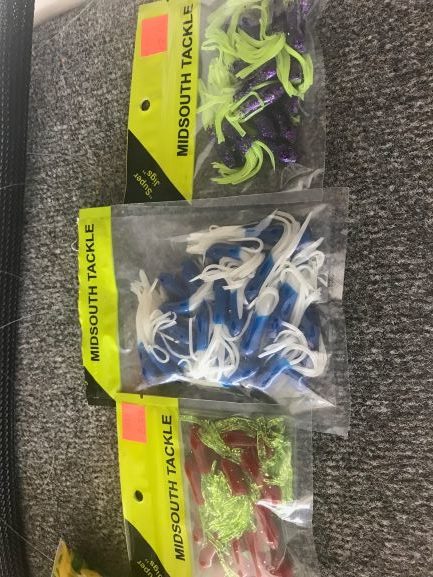 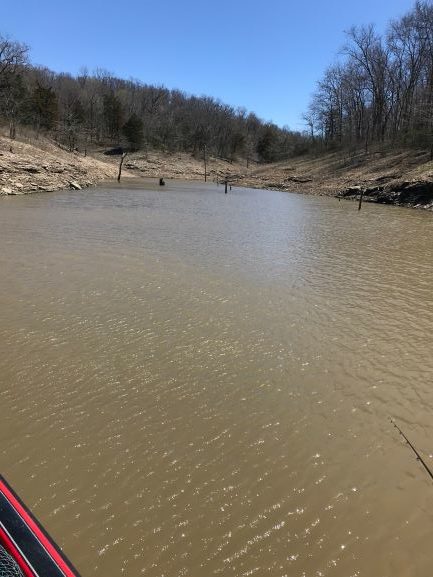 Day 2 we wake up to 25 mph winds and a wind chill of 28°. With gust getting up to 35 mph the area we had fished the day before would be sitting right in the face of the wind, so we followed Ben and Brandon over to the Pigeons Roost area hoping to escape the wind, the wind was swirling it seemed like in every direction, making fishing difficult. We spent the whole day within a mile of Pigeons Roost launch ramp ducking in and out of various coves and hiding behind Bluff walls trying to escape the wind. Our tenacity paid off with limits again, however we had to work for them and it was an all day affair. Getting back to motel around 5:00pm we cleaned fish and went to the Restraunt where they had nice Prime Rib Dinner waiting for us. 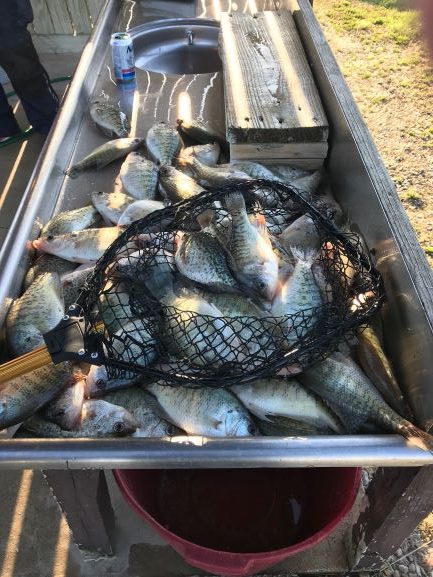 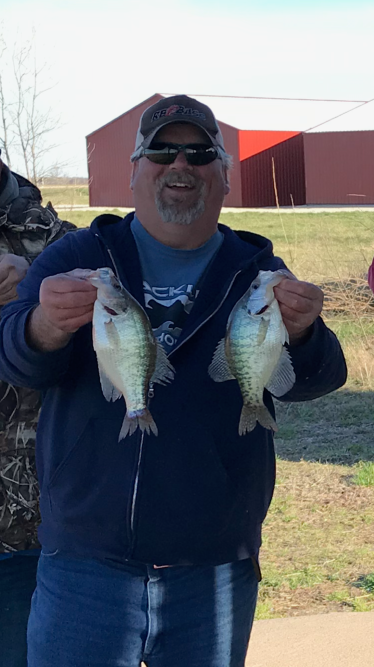 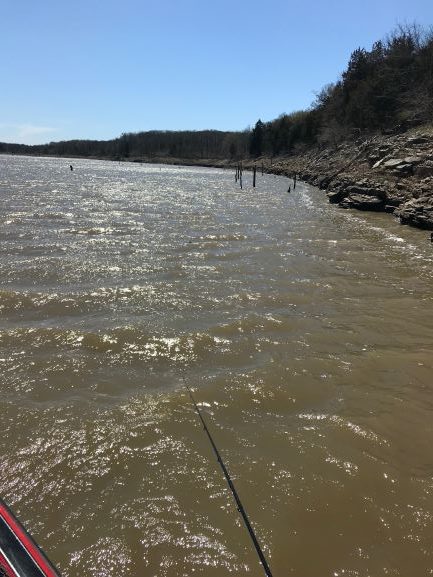 Day 3. We wake up and the wind has finally died down. It’s cold in the lower 40’s but at least we won’t be fighting the wind. It’s Saturday now, and the lake is crowded, the water temperature had made a big drop from the day before and the fish are scattered, we find them from 8’to 20’ and suspending over open water as well as along the standing timber, by constantly switching colors and depths we once again were able to get Limits for both boats, it was grind catching a fish here and there. Once again back to the motel to clean fish.
When we got back to the motel the adjacent Tackle Shop was the host for The Eastern Missouri Crappie Club’s Mark Twain Lake Tournament, ran like a bass tournament, all fish (7 fish limit) had to be weighed alive. The weigh in was ran smoothly and efficiently. Impressive was the camaraderie the Anglers had for each other, and the young Anglers in attendance. These guys have modified there bass boats to make them crappie fishing machines. With a system called spider rigging they have up to eight rods sticking out of the front of their boats . These light rods might be up to 14’ long. They will start the day varying the depth and color on each rod and dial in their techniques as they find the fish. Both Anglers will often sit side by side on the bow of the boat to watch the rods, looking for the little bump of the crappie bite. The Anglers of The Eastern Missouri Crappie Club we’re very welcoming to this bass Angler as I asked many questions about crappie, how to fish them and the modifications made to the bass boats. Congratulations to young Will Jackson on his Tournament win with a little help from his father Jason Jackson and Todd Rhodes. 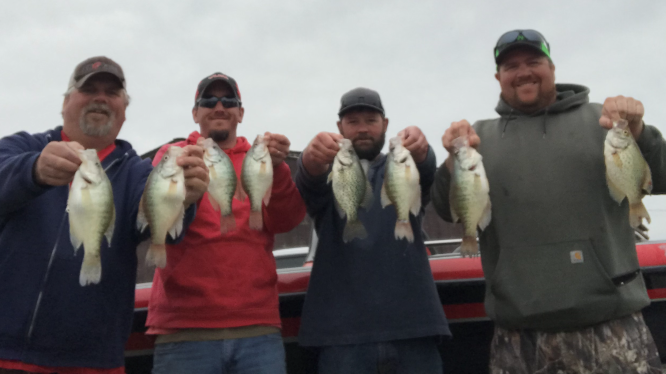 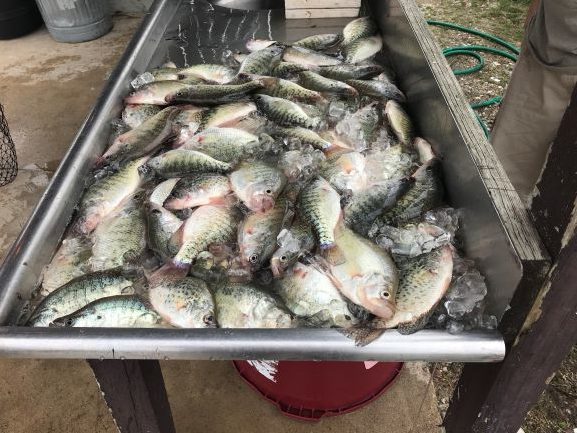 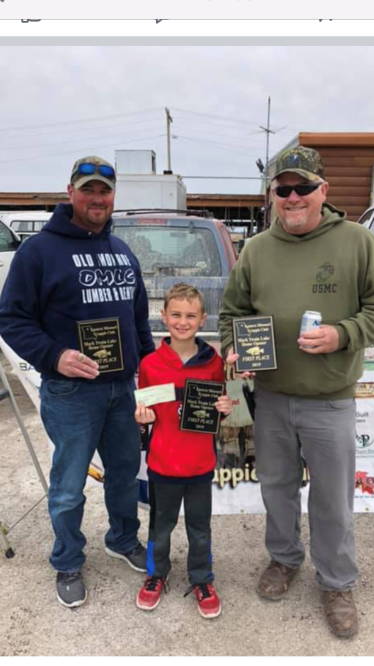 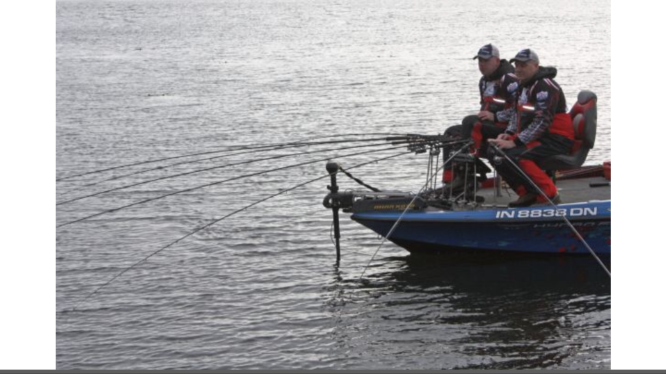 Day 4.  We woke up to a snow storm. With over 4” of snow already fallen we decided it was time to head south…
All in all it was a great crappie trip to a new lake for me. Met some really great Anglers who are just as passionate about crappie as we are about bass…
Speaking of bass, Mark Twain Lake has excellent bass fishing as well, it took 22Lbs to win a tournament while we were there. 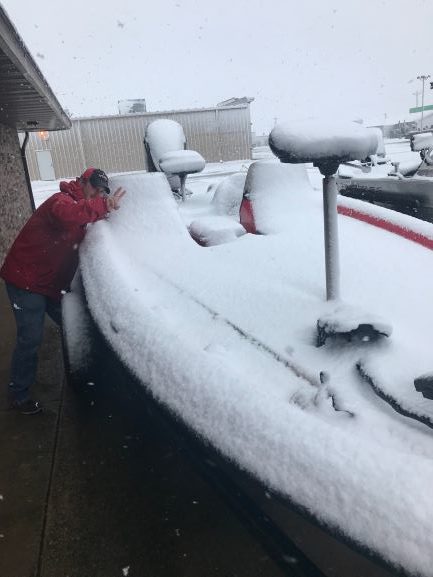 If your in the St Louis area and want to get in on some great crappie fishing get ahold of
Kenny Wilkinson
Wilkee’s Guide Service
Center, Missouri
(573) 822-8680
Like Wilkee’s Guide Service on Facebook
For a great Crappie Club look up
Eastern Missouri Crappie Club on Facebook
For Lodging when visiting Mark Twain Lake
The Junction Inn
Junction of Highways 19 & 154
Perry, Missouri
(573) 565-3620
Jeff Jewell
RB Bass