On July 7th my buddy Josh Forman and myself launched out of tuttletown launch at New Melones and started fishing directly to the right at the day use area which is now underwater about 10’, we started fishing between 15’ and 35’ throwing jigs and shakey heads with a slower dragging retrieval. Although I wasn’t lucky to catch one josh hooked into one his  3rd cast and was a 3 1/2 pound largemouth in about 18’ of water. We ended up leaving that spot shortly after and went and started hitting island tops and main lake coves. The first island top we came up to we noticed the bass were blowing up all over the place but we could not get them to commit on our top water baits so Josh went back to throwing a jig and I started to drop shot and we started catching fish in the 1 1/2 to 2 lb range and there was a lot of them. We took a little run to a creek and had some luck on jigs from 10’ of water to right on the shore line. I started throwing the River2sea s-waver 168 in light trout color and ended up hooking into about a 4 1/2 lb large mouth as soon as my bait hit the water and when I was reeling that fish in there was 2 followers even bigger and that got me excited about throwing swimbaits for the day. About half hour later I bombed that s-waver just as far as I could throw it parallel to the bank about 5’ off the shore and my hooks tangled together but on the way back to the boat I had a monster spotted bass probably around 7-8 lbs following it back to the boat and that got my heart beat pumping but it wouldn’t commit. I threw the s-waver and drop shot the rest of the day in about 15’ of water and had a lot of fun catching those 2lbers. We ended up running towards hwy 49 bridge and found a main lake point that looked promising so we stopped and hit it, I was drop shotting and josh was throwing a shakey head in about 5’ of water and he hooked into the biggest bass I have seen caught in person. As he yelled “get the net” I looked down and saw a mouth that probably could have swallowed my 4lber like nothing and it was on, he brought him close to the boat and the fish jumped, I tried netting him but the net was about 6” to short and he ran for the depths and broke Josh’s line and it was devastating time for josh to loose a fish of a life time that probably weighed 12-13 lbs. after that josh was pretty upset and we called it a day but all in all was a good day catching fish and we probably ended the day with 14lbs for our best 5. The point is change up your baits and get out of your comfort zone and throw new baits because you never know what could happen. I hope this report helps you guys out on your next trip to New Melones.. 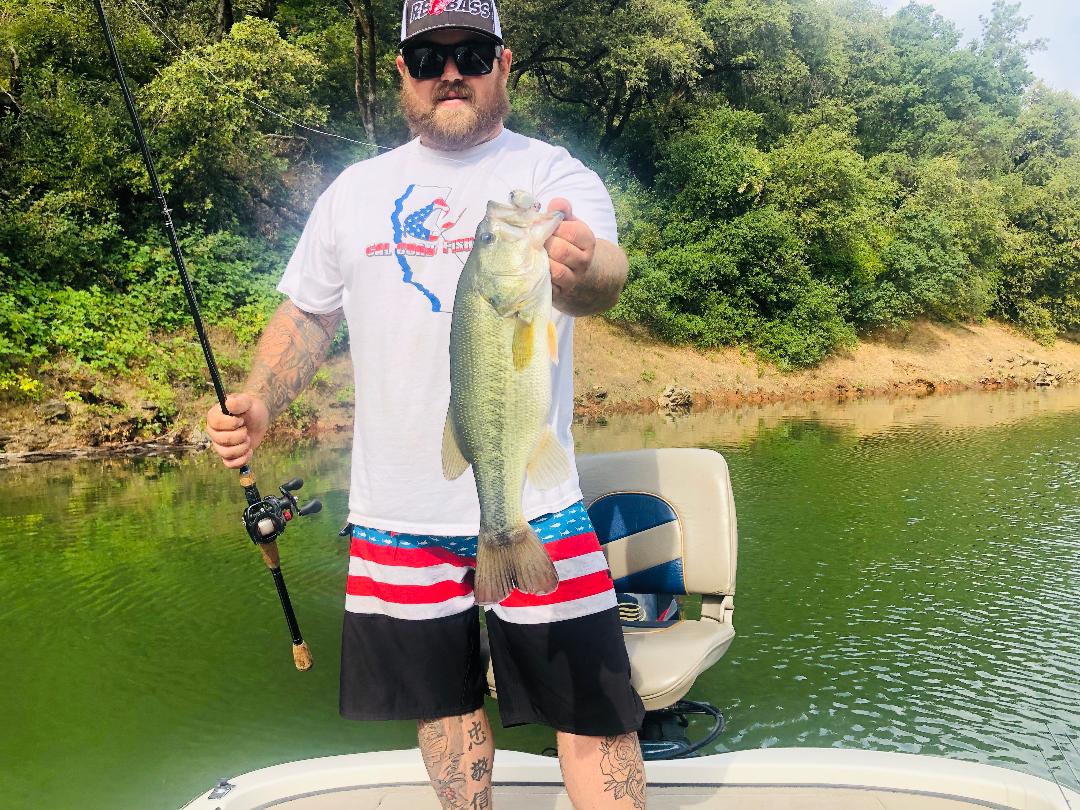