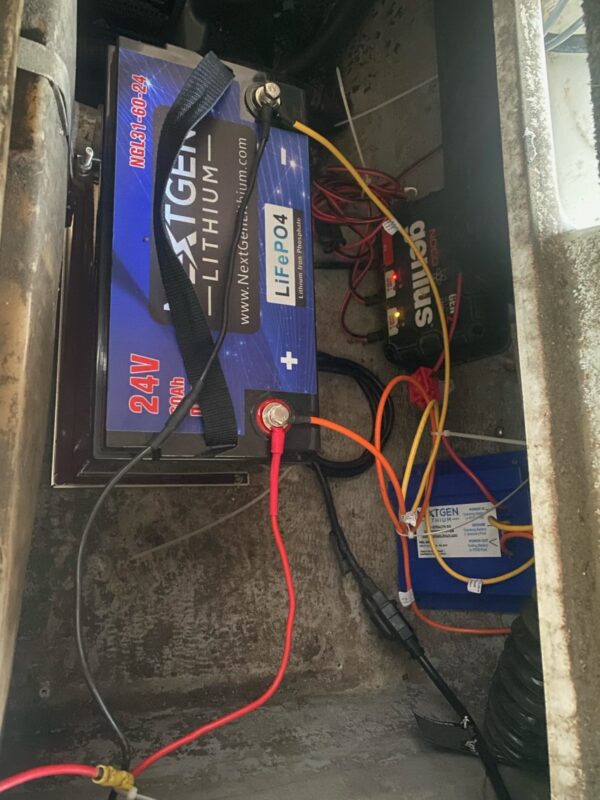 I was running two blue top optimas that weighed about 54 pounds a piece. Bought one NextGen lithium 24 volt 60 amp hour with their stealth charger which weighs in at 35lbs for the single battery in a group 31 case.

Have had the battery for a couple months now and absolutely love it. Pro’s that I have noticed have been one the weight difference. I’m running a 17’ nitro with a 90hp on the back and every bit of weight loss helps it perform. Second is the power this battery delivers, I recently fished a two day tournament and going into day one the battery was 100% charged. After running around and fishing for 9 hours, I finished the day with 80% power left. Going into day two I started the day with 85% battery and finished the day with 72% and that was with a good 45 minutes at the end of the day with the trolling motor on constant to fight the wind. Third is the Bluetooth capability. Makes it easy to check the life of your battery. Fourth is the stealth charger. It is a great add-on as it will charge your trolling battery while your main motor is running. It’s a very easy install to hook it all together. It will also charge your trolling battery when you’re charging your main battery and it becomes full excess will go to the lithium. It would charge a lot faster with a dedicated lithium charger but for me this works.

Only downsides I have encountered so far are that the stealth charger is slow to charge if you are only using that instead of their dedicated lithium charger. It’s no fault of NextGen that it is slow. I’m using an agm starting battery and a noco charger to charge that battery and then the stealth charger takes the excess and puts it into the lithium. If you don’t need super fast charge times it works great! Second is by swapping to a single 24 volt battery if I lose the main battery I can no longer pull or jump my motor now. Hind site I’d go with two 12 volts just as a safety net.

Main reason for choosing NextGen Lithium was the price for the battery and a charger was great and they offer a 12 year warranty. One of the best warranties I was able to find.