You are here: Home / Bass Fishing Reports / Rhodes and White dominate at Wappapello 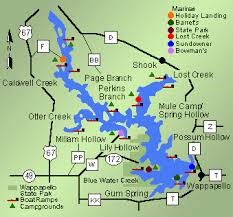 David Ladyman and I were Boat 45 out of the 84 bass boats launching out of Lake Wappapello’s Redman Creek for The Wappapello Bass Circuit.
We had found some bass up river in pre-fish but figured most boats were heading up that way. The river can get crowded on tournament day, and being boat 45 out, our confidence in getting any of our primary area  was slim. We figured the tournament would be won up River and we were in it, to win it, so we ran up there figuring to grab the first open point we seen.
As we started crossing the main Lake we could see a fog bank on the river, we slowed to a safe speed and continued up river until we thought it was unsafe to travel on plane any further. We started fishing just past Chiona Landing with David throwing various top waters and me following it up with craws and Jigs. As we worked our way into a cove we started to get some small keepers.

With fog lifting we found ourselves with 4 small keepers in the boat and decided to head up river in search of bigger fish, as we figured every cut, point, and piece of structure had Anglers all ready on them. We ended up at the Greenville Bridge, we fished all the areas around the bridge and picked up another small keeper for our limit, but we needed to cull all of them out…
As the morning wore on fishermen started running out of the river allowing us to get on some areas we had found fish on earlier in the week.
Fishing a rockpile on a channel bend we were able to cull out 3 of our little rats before the 2 O’clock weigh in, finishing in 11th place and cashing a check. We fished big worms and Canopy Grenade Jigs to cull up..
Winning the tournament was the Team of Garrett Rhodes and David White, these guys have been dominating the Wappapello Circuit this year with Trophy finishes in Five events.
They were throwing Canopy Grenade Jigs up river to take the win.